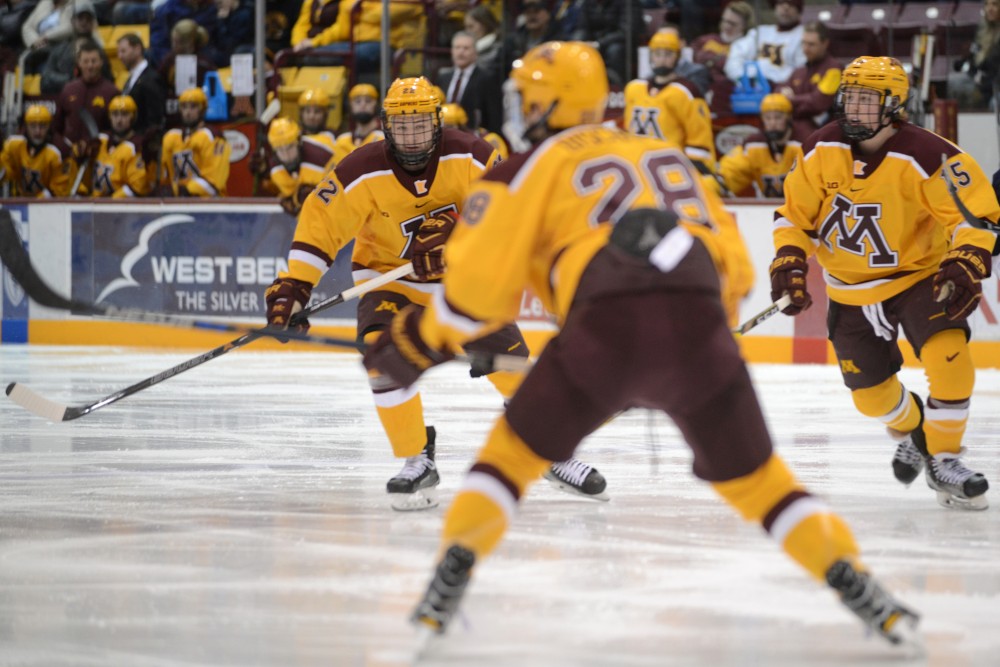 Sophomore forward Tyler Sheehy skates down the ice at Mariucci Arena on Feb. 4, 2017.

With the conference lead at stake and down 1-0 in the series, the Gophers came away with a victory Saturday and again put themselves atop the Big Ten.

Michigan bested Minnesota 5-3 Friday, but the No. 5-ranked Gophers weren’t ready to be swept by the Wolverines and won 4-1 Saturday.

“We played the game the right way [Saturday],” head coach Don Lucia told reporters Saturday. “It was a good team win. Our goaltender played well. The guys that we need to score, scored, [and] the guys that needed to block shots and defend did that.”

Gophers’ forward and leading scorer Tyler Sheehy got things done Saturday for Minnesota with an empty-netter and the game-winner.

He extended his lead in the Big Ten scoring race by notching three points for 52 points total on the season so far, five points above the next closest scorer in the conference.

“It’s pretty special,” Sheehy said to the media. “I don’t know if I was really expecting to do that this year, but I’ve got to give a lot of credit to my linemates and my teammates. They’ve been unbelievable the entire year.”

Sheehy’s 52 points are the most for one single Gophers player since Ryan Potulny in 2005-06.

Minnesota’s “Road-Runner” line, consisting of Sheehy, forward Rem Pitlick, and captain Justin Kloos, factored into three of the Gophers’ four goals on Saturday, and were electric with their passing and awareness on the ice.

Goaltender Eric Schierhorn stood tall and stopped 27 of the 28 shots he faced Saturday and held off a barrage of chances in the third period.

Minnesota regained the lead in the Big Ten regular season standings, which saw the Gophers and Wisconsin tied for first place after Friday’s games.

With Minnesota’s loss and Wisconsin’s victory Friday, the Gophers and Badgers were in a dead heat for first place in the conference.

“We got off to a good start tonight,” forward Taylor Cammarata told reporters. “Then the second period wasn’t very good, and the third period, we went into it thinking it is a 0-0 game … Then we had a couple of unfortunate plays, and it’s just a tough road loss.”

The game was back-and-forth throughout, with two lead changes in favor of the Gophers, before the Wolverines scored three unanswered goals to secure the victory.

The lead built in the first period would not stand, largely due to the three Gophers penalties in the second and four in the third, which gave Michigan prime opportunities to get back into the game.

Minnesota also gave up 41 shots to Michigan Friday, tied for the third-highest shots against in a game all season.

“It’s not [that] easy to come [into Yost Ice Arena] and win a couple games,” Lucia said. “We’ve been talking about trying to win three out of four every two-week segments, and we put our backs up against the wall a little bit on Friday … and we responded in a positive way [Saturday].”