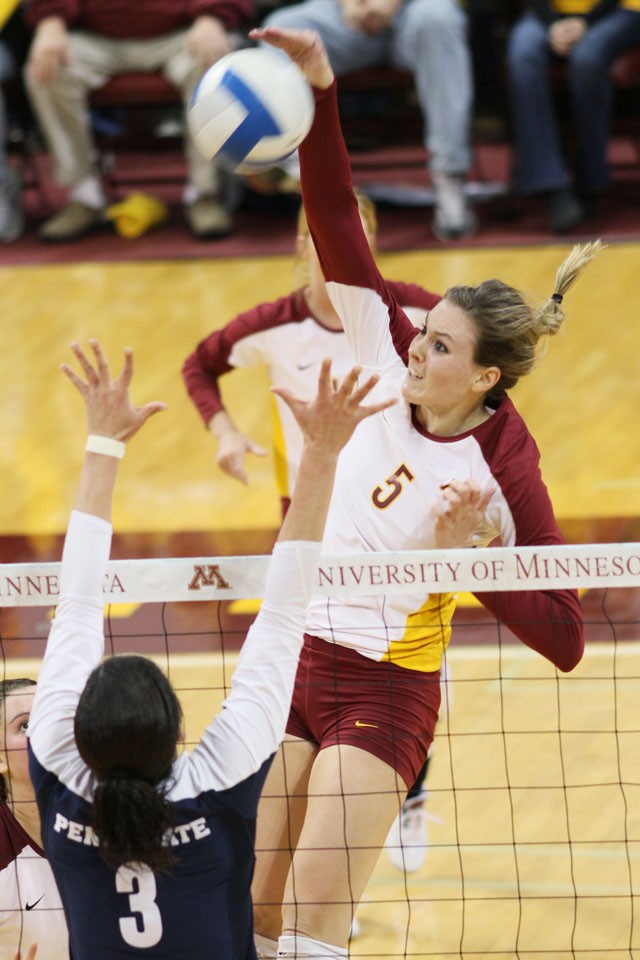 In her four years sporting maroon and gold, thereâÄôs always been one thing senior Lauren Gibbemeyer has wanted to do. Beat Penn State. After losing on the road to the Nittany Lions on Oct. 15, GibbemeyerâÄôs last chance for a victory against the three-time defending national champions came Saturday in the regular-season finale. As a crowd of more than 4,200 fans recognized the middle hitter on Seniors Night, the 15th-ranked Gophers gave Gibbemeyer that sought-after win in dramatic fashion, knocking off No. 7 Penn State in a come-from-behind five-set victory. âÄúI couldnâÄôt ask for more,âÄù Gibbemeyer said. âÄúHaving it be senior night and our last game of the conference, we really went out with a bang.âÄù The win put the Gophers at 24-8, the same as last yearâÄôs team that reached the Final Four, and the Gophers received a No. 10 seed in the NCAA tournament. Though there are 64 teams, the tournament differs from basketball in that the NCAA seeds only the top 16 teams and has only one team per seed, so the No. 10 seed indicates the Gophers were the 10th-strongest team. Upsetting the team that has won the past three national championships certainly bolstered their rÃ©sumÃ©. After Penn State took the first two sets 25-14 and 25-21, the Gophers capitalized on late mistakes by the Nittany Lions as Gibbemeyer notched two consecutive kills to give Minnesota the crucial third set victory 26-24. Picking up the fourth set 25-23, the Gophers jumped out to an 11-8 lead in the fifth before dropping five of the next six points, leaving Penn State ahead 14-12 at match point. With the victory nearly slipping out of their hands, the Gophers fought off three Penn State match points before tying the decisive set at 18-18. During a set that saw 14 tied scores and seven lead changes, the Gophers finally found themselves on top of the Big Ten champions, leading 22-21 after Gibbemeyer and freshman Ashley Wittman combined on a block to push Minnesota to match point. Then it was time for the lone senior to say her goodbyes to the Nittany Lions. Without any hesitation, Gibbemeyer approached an overpass at the middle of the net and killed the ball down into Penn StateâÄôs court, sealing a 23-21 fifth-set victory âÄî and the match âÄî for the Gophers. âÄúThis was a statement the team wanted to make,âÄù head coach Mike Hebert said. âÄúThe team felt that it could win. If a team doesnâÄôt feel that, if they donâÄôt believe that, then thereâÄôs no chance.âÄù Securing a share of second place with Illinois, the emotional win was the GophersâÄô first over Penn State since Oct. 2, 2004. SaturdayâÄôs upset, combined with a 3-1 victory over Ohio State on Friday, sends the Gophers into the tournament with as much momentum as they couldâÄôve hoped for. âÄúAs coaches, we want to make sure weâÄôre playing our best ball at the end of the season,âÄù said Hebert, who has led the Gophers to 14 NCAA appearances in his 15 seasons. âÄúWe build the team to be a post-season team. The players themselves decided that they really wanted to trust each other on the court, and to play in a way that it was obvious that there was some team chemistry going on.âÄù He added: âÄúI try to make sure the atmosphere in the program is such that if the team takes over, they have the freedom to control their destiny.âÄù Because of their high seed, the Gophers will host the first and second rounds of the tournament at the Sports Pavilion this weekend. Iowa State and Creighton kick off the tournament at 4:30 p.m. Friday, while the Gophers host North Dakota State during the dayâÄôs second match at 7 p.m. The winners play at 6 p.m. Saturday to decide which team will advance to Seattle for the Sweet 16. âÄú[Playing at home] will give us a lot of motivation and confidence,âÄù said Gibbemeyer, who was instrumental in the GophersâÄô 13-2 home record this season. âÄúBeing back in front of all our fans is going to give us the edge.âÄù Seven other Big Ten teams advanced to the NCAA tournament âÄî Penn State, Illinois, Michigan, Purdue, Ohio State, Indiana, and Northwestern âÄî making MinnesotaâÄôs 14-6 conference record all the more impressive. âÄúIt really boosts our confidence and gets us ready to go all the way,âÄù junior libero Jessica Granquist said. âÄúAll the pieces are falling into place.âÄù