The freshman quarterback completed the first pass and touchdown of his career. 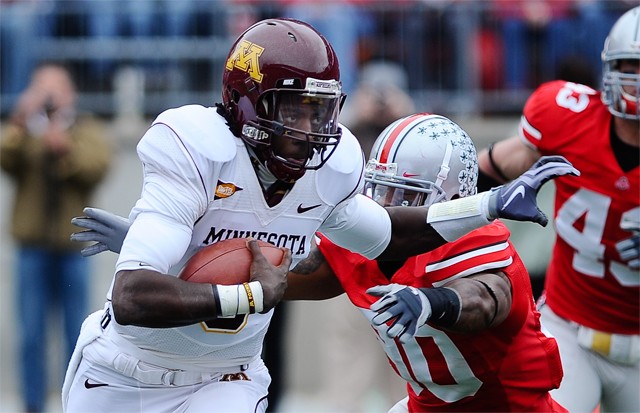 COLUMBUS, Ohio âÄî In danger of being shut out for the second-straight week, the Gophers turned to a quarterback who had not completed a collegiate pass entering SaturdayâÄôs game at Ohio State . Trailing 38-0 to the coasting Buckeyes with 7:31 remaining in the game, the Gophers inserted true freshman MarQueis Gray to lead a drive from the GophersâÄô 22-yard line. Gray led the GophersâÄô first offensive scoring drive since the third quarter against Purdue on Oct. 10 to pull Minnesota within the final margin of 38-7 . âÄúIt felt real good, but obviously the win would have felt better,âÄù Gray said of the drive. âÄúI know my role in this offense, and IâÄôm just trying to help this team win.âÄù Gray completed all four pass attempts and accounted for all but 3 yards of a 78-yard drive that culminated in his first career touchdown pass, a 16-yard completion to sophomore wide receiver Troy Stoudermire . âÄúThe way he just took pride and went out there and completed on the drive âÄî itâÄôs just amazing to see him come up and get the ball and drive us down in the fourth quarter when itâÄôs obvious that it was a blowout game,âÄù said Stoudermire, who caught three passes for 34 yards on the drive. âÄúI thought that was great for MarQueis.âÄù Gray rushed twice for 32 yards on the scoring drive, and led Minnesota with 11 rushes for 81 yards, both career highs . Gray had entered the game with 10 rushes for 55 yards . âÄúI expect MarQueis to play well,âÄù head coach Tim Brewster said. âÄúHeâÄôs involved in every one of our game plans.âÄù In the first quarter, he made his first career completion on an 8-yard pass to senior wide receiver Eric Decker , who was ironically on the passing end of GrayâÄôs first career touchdown reception against California on Sept. 19 . Gray, who had attempted one pass this season before Saturday, finished with five completions in six attempts for 51 yards. âÄúI have my set number of plays, and once the game kept going, they just kept rotating me in,âÄù Gray said. âÄú[Completing passes] gave me a lot more confidence in my game and gave me confidence in my offense and made me believe in what I was doing.âÄù Gray had a hand in seven (three rushing, four passing) of the GophersâÄô 17 first downs on Saturday. âÄúWhether or not we look at an expanded role for MarQueis âÄ¦ weâÄôll continue to take a look at and see, but weâÄôll continue to use two quarterbacks as we move forward,âÄù Brewster said. Junior quarterback Adam Weber completed 10 of 23 passes (a few of which were dropped by his receivers) for 112 yards on Saturday and threw two fourth-quarter interceptions, bringing his season total to 11. Weber, who has six touchdown passes this season, set the GophersâÄô career records for completions and attempts earlier this season and surpassed 7,000 career passing yards on Saturday . âÄúThis is [WeberâÄôs] third year; he knows what heâÄôs doing. He knows how to get our team riled up,âÄù Gray said. When asked whether Weber would remain the starter, Brewster was firm in his answer. âÄúWeberâÄôs my starting quarterback,âÄù Brewster said. Stoudermire, assistant coach have words Near the end of the first quarter, the ESPN television broadcast showed Gophers sophomore Troy Stoudermire being restrained in what appeared to be a heated exchange with a Gophers coach on the Minnesota sideline. âÄúObviously, thereâÄôs emotion on the sideline,âÄù Brewster said. âÄúItâÄôs coaching; itâÄôs the game of football, and emotions are a big part of it, and we all want to win real bad.âÄù The interaction followed a punt-coverage play in which a kick-catching interference penalty was called on Stoudermire, who was within 10 yards of Buckeyes returner Ray Small when he called for a fair catch at the Ohio State 8-yard line. Stoudermire tried to step to the side of Small but brushed against him and was flagged for the 15-yard penalty. At the start of the second quarter, the broadcast showed Brewster talking to Stoudermire. âÄúI donâÄôt think there was any problem with him being calm; I thought he was fine,âÄù Brewster said after the game. âÄúObviously, weâÄôve got to be smart in that [punt-coverage] situation.âÄù