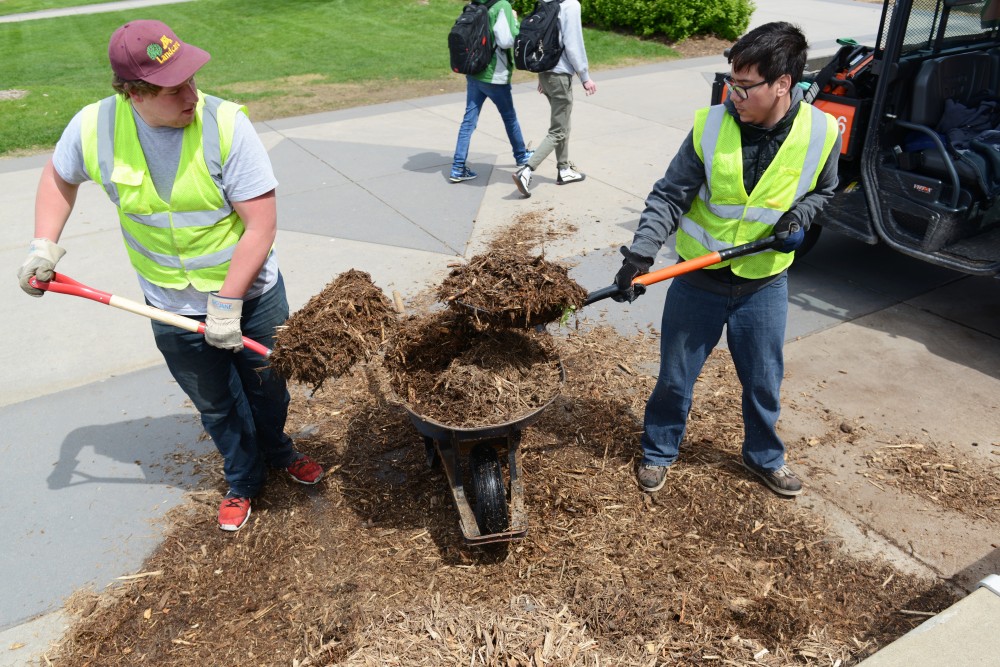 The University of
Minnesota landcare department is about 50 people short as its employees begin
work for the spring.

The division hopes
to hire and train a green-thumbed workforce of roughly 100 student workers in
mowing, planting, fertilizing, mulching and more. But over the last three years,
the team has seen less interest from students, forcing their staff count to
hover around 95. Even missing just a few workers makes keeping up with duties
difficult.

“It stretches us out,” said supervisor Doug
Lauer.  “We wind up hiring through the
whole summer … [but] never hit our target.”

The worker shortage
causes problems across the board, said former landcare director Lester Potts,
who retired Monday after a 40-year tenure with the department. He said problems
show most in mowing duties.

When the weather warms, lawns need to be cut
twice a week instead of once.

“It’ll be a
struggle to keep up there,” Potts said. “Not having enough people to man the
mowers, … it really throws a wrench into things.”

Potts said he has
seen other hiring lulls in his tenure, but in recent years, students have
become less interested in blue-collar jobs. Starting hourly wage for student landcare workers in $10.25.

“A lot of people are laying it on
millennials,” he said. “Their desires are different.”

As the department
races to meet its 100-worker summer goal each year, the months in-between are
especially challenging for workers. Hiring efforts start in March but don’t finish
until late May, Lauer said.

“We are usually just skimming by to meet our
needs,” Lauer said. “The gardeners that we have on staff, a lot of time will work
overtime in spring.”

Gardener Danielle
Ringle said she’s still looking to fill all the spots on her 10-person team for
repair projects. The department has taken on some external contractors as a
result.

“This is pretty
abnormal,” said Ringle, who worked for the department all four years of her
undergraduate studies and returned for a full-time job.

The best scenario
for the University’s department is finding a freshman, like Ringle, who’s
willing to stick with them until they graduate, Potts said.

“Students are here
for education, and if we can provide them financial support, it’s a good thing,” he said.

The department has
started renovating certain sites into naturalist areas, like the urban meadow
next to the law school, Lauer said. These areas take less upkeep, but only a
few places around campus can be turned into these kinds of areas.

They also still
take years to set up, he said.

Some colleges’ land
care departments have moved away from a student workforce, Potts said. At a Big
10 meeting among landcare officials, Potts said other colleges were surprised
to hear how many students the University employs.

“It’s not a
reliable workforce. The turnover is high. You invest a lot in training and
educating people,” he said.

Lauer said interest
from students follows the job market. In 2008, when the state was reeling from
the Great Recession, a lack of outside jobs led to student interest being at an
all-time high.

“It’s amazing when you give people the
opportunity to work with their hands,” he said. “Making something go from not
looking good to looking really good, it gives you a lot of pride.”