Jack Ramsey and Darian Romanko have made a solid impact so far. 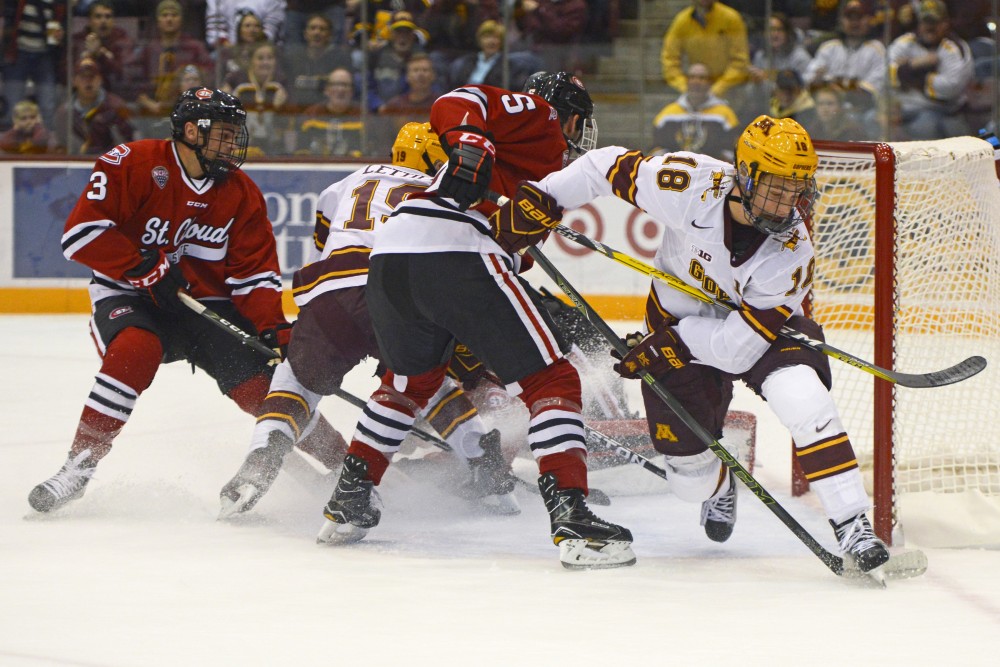 The duo of sophomore forwards — Jack Ramsey and Darian Romanko — have been finding consistency together early on in the season.

“I’ve been with Romanko for over a year,” Ramsey said. “We’re starting to click pretty well, [and we] definitely have some on-ice chemistry.”

Both players are a part of the “trench line,” as Ramsey calls it, and the two have been making an impact already, something neither of them found a way to do last season.

Minnesota scored only two goals in Saturday’s 3-2 loss to the Huskies, and both of them came in the first period, both from the same line.

Ramsey opened up the scoring with his first official collegiate goal, which he said was long-awaited.

“I ended up on my butt in the celebration,” Ramsey said. “First shift, [I] got one in the back of the net with a great forecheck by Cammy and a great pass by Darian, so it felt pretty good.”

Ramsey, who didn’t score at all during his rookie season, said he’ll probably be gripping his stick a little less tightly now that he has his first goal, and it’s good to have the weight lifted off his shoulders.

Romanko has been finding a rhythm of his own in his second season at Minnesota. He scored in the team’s exhibition game, and though not on the official scoresheet, helped show the offensive impact that he and Ramsey can bring.

Lucia said he isn’t sure who will continue to play with Ramsey and Romanko, but he knows he likes what he sees when the two are together.

“I don’t like to call them our fourth line,” Lucia said. “They’re responsible, I think they’ve been our most consistent, those two players, in playing the right way.”

Ramsey and Romanko both spent time in juniors before they came to the Gophers, and though only sophomores, they have plenty of experience.

Ramsey played in the British Columbia Hockey League for two seasons with the Penticton Vees and was part of one Fred Page Cup-winning roster.

He said he was part of that team’s “trench line,” battling on the boards and being gritty, which has carried over to his time with the Gophers.

Romanko spent two seasons with the Minnesota Wilderness in the North American Hockey League and won a Robertson Cup with the team in 2015.

The hard work both have put in the past has translated well to the college game and is starting to get noticed early in their second seasons.

“I’m happy for them both, because they’re more lunch-pail kind of guys,” Lucia said. “They’ve both really improved from last year … they’re scoring a different way, and probably in this day and age, the right way. You’ve got to work to score goals.”