Leidner shifts away from running game

Mitch Leidner will run less this year, partially to avoid a potential injury. 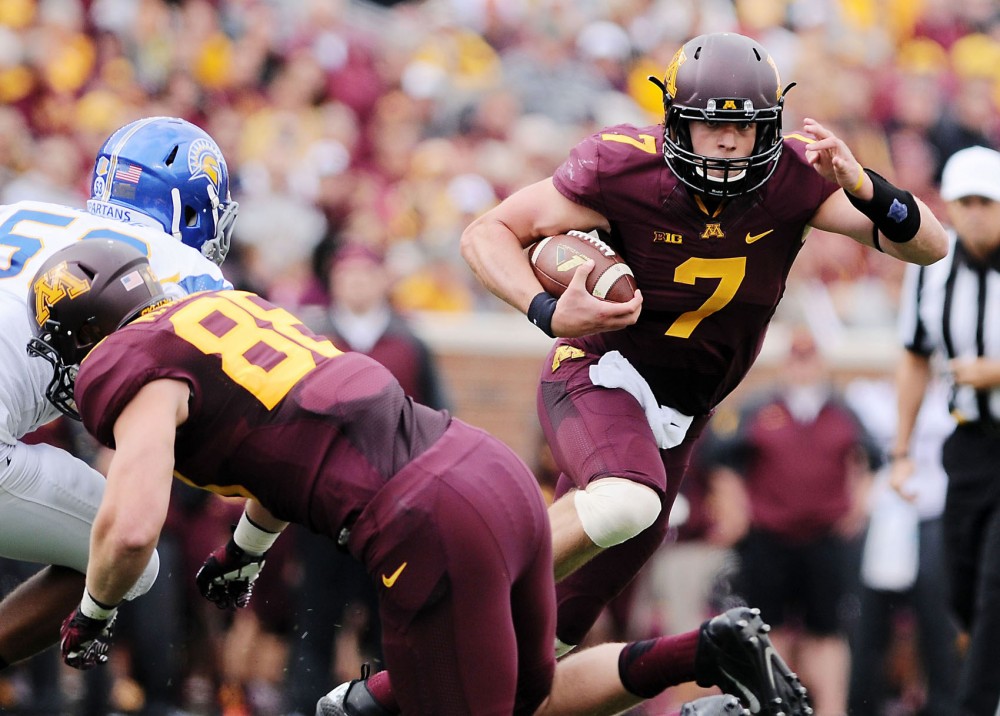 Gophers fans likely won’t be seeing that video game-like stat line from the quarterback this year. That’s not because he isn’t capable; it’s because the system won’t allow it.

“We can get the ball in different guys’ hands. [It] doesn’t have to be quarterback centered nearly as much as it was,” offensive coordinator Matt Limegrover said.

This year, the Gophers feature four running backs that have proven they can carry the ball. Wide receivers Donovahn Jones and KJ Maye can also run the ball for Gophers in the form of reverses and jet sweeps.

With all of these possible ball carriers, Leidner shouldn’t have to carry it 102 times like he did last year. His coaches don’t want him running that much anyway.

“An important factor as we move forward is making sure that we’re not intentionally putting him out there more than we need to, more than what fits into what our bigger game plan is,” Limegrover said.

Last year, Leidner was splitting time with former Gophers quarterback Philip Nelson. This season, Leidner is the undisputed starting quarterback, and with that comes an added emphasis on keeping him healthy.

“It’s different. It’s a different style of play for me, but it’s something I’ve done in the past in high school,” Leidner said of his new role.

Leidner is a dangerous rusher and should still get chances to run. In the Aug. 28 opener against Eastern Illinois, he carried the ball seven times for 15 yards and two touchdowns.

On his second touchdown of the opener, Leidner ran over three Panthers defenders at the goal line for the score.

“When you are at the goal line, you have to get in the end zone. I feel like any quarterback would do the same,” Leidner said.

Limegrover said it’s not in Leidner’s DNA to shy away from contact.

“No one is going to think less of you if you don’t step out and gain that extra yard, but you don’t get hit by three defenders as well. We’re working on that all the time,” Limegrover said.

Leidner and Limegrover have also been working to settle down the quarterback early in the game, possibly by running the ball.

“What he’s talked to me about is getting a run in there early on,” Leidner said. “Maybe lowering my shoulder or getting out of bounds. It really helps me get in the game a little more.”

Head coach Jerry Kill praised the way his quarterback ran against Eastern Illinois, noting that he had lower pad level than a year ago.

“A quarterback will always have to take care of himself. It doesn’t matter if you are in the National Football League or what — they are going to have to scramble and do things,” Kill said after the season opener.

Though the coaches are trying to limit Leidner’s carries, Limegrover acknowledged that his role will vary by game.

“Can’t say it’s going to be seven [carries] every week,” Limegrover said. “Could be four one week, could be 11 another. But we want him upright and being our quarterback.”