The Gophers had 229 receiving yards to make up for just 80 yards on the ground in the loss to Maryland. 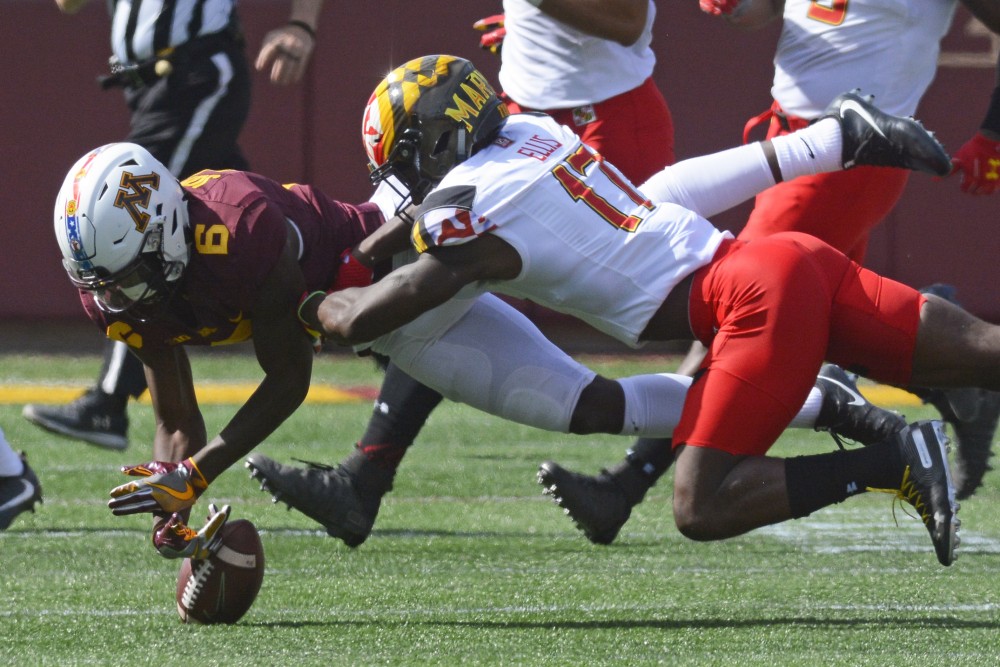 Gophers wide receiver Eric Carter made a diving catch on a 35-yard reception as the student section in front of him roared with approval.

Carter’s effort and other efforts by Gophers receivers were not enough for the win as the team fell 31-24 at TCF Bank Stadium on Saturday.

“This can’t just be a [running backs Rodney Smith and Shannon Brooks] show,” said head coach P.J. Fleck. “Other guys are going to have to step in … you saw guys like Eric Carter on offense tonight, and Phillip Howard. … We got to be more consistent.”

Demetrius Douglas, the second best receiver for the Gophers in receiving yards, was out with an injury for the Maryland game.

Douglas had 83 receiving yards in the first three games, second to only Tyler Johnson.

“He’s going to be out for a significant amount of time,” Fleck said.

In the Gophers loss, the wide receivers fared much better than the running backs — a statistic uncharacteristic of Minnesota this season.

“That goes back to us,” Fleck said about the struggling running game. “We threw the ball a little more this time because they were putting eight or nine guys in the box and loading up the box.”

Carter had 54 yards in the game, catching a pass that set the Gophers up for a tying touchdown toward the end of the fourth quarter. He had 16 yards receiving the whole year before this.

Other players showed up on the stat sheet who had little impact in the first three games.

Phillip Howard, a redshirt freshman was targeted seven times in the game, catching four of those balls for 46 yards. Prior to the Maryland game, Howard had 16 yards on two catches for the Gophers.

“I thought Phil Howard played great,” Rhoda said. “I mean those two are right there skill-wise. When he plays fast he’s a hell of a football player.”

The Gophers tight ends combined for 60 receiving yards and a touchdown. Brandon Lingen caught a touchdown for seven yards to tie the game at 17-17 with 5:19 remaining in the third quarter. It was his first touchdown in two years.

“It’s definitely awesome to be back and help this team win,” Lingen said. “But there’s 10 other guys out there on that field doing there job, I’m just the one to make the catch.”

Nate Wozniak, the tight end, had a 23-yard reception that set up a one yard touchdown for Smith to tie the game in the second quarter 7-7.

Tyler Johnson, the highest producing wide receiver on the team, had 69 yards in the game as well, with his longest being 26.

“[With] the amount of time we’ve put in, in the offseason, there’s no somebody going out there I don’t feel comfortable throwing to them,” Rhoda said. “I got all of the confidence in the world in everybody in that room.”