The potential leaders are vying for spots within the student group. 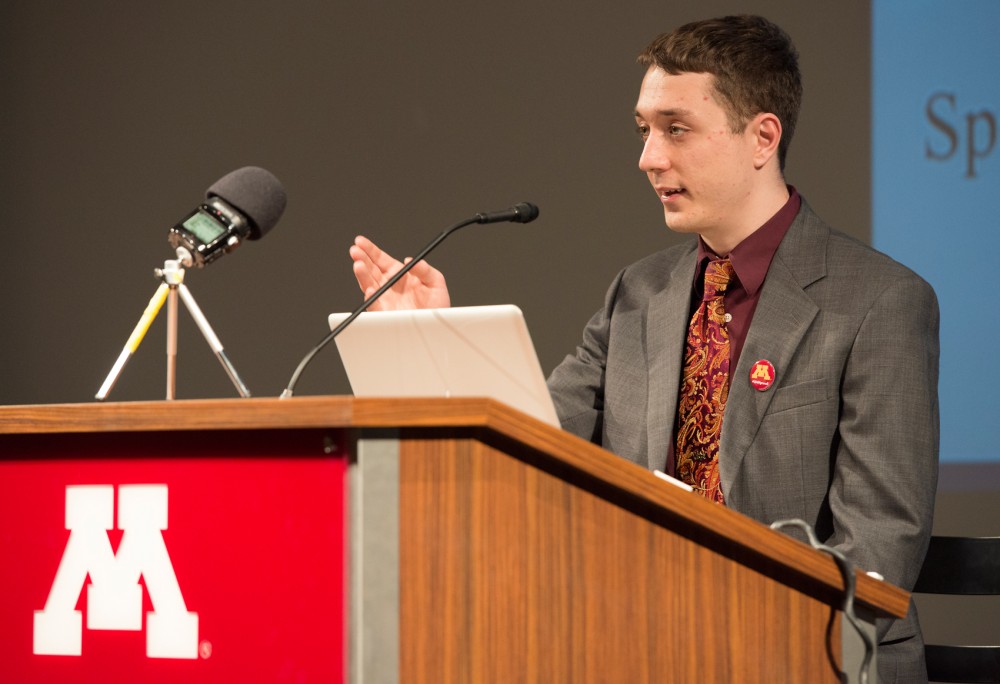 Current COGS president and candidate for reelection Nicholas Goldsmith responds to a question from graduate student Lauren Mitchell about his plans for the coming year during a town hall style meeting in the Coffman Memorial Union theater on Tuesday evening. Goldsmith spoke about his plans to introduce gender neutral bathrooms throughout campus.

by Brian Edwards
On Tuesday night, the incumbent leader of the Council of Graduate Students called for an increase to graduate student pay and more focus on LGBT issues to a nearly empty room.
COGS President Nicholas Goldsmith  spoke to less than ten audience members in Coffman Union in the first of three student government candidate forums  hosted by the All Campus Elections Committee.
Another candidate was slated to challenge Goldsmith but dropped out because of “family and life reasons,” said Alexandra White, commission co-chair in charge of product coordination and organizational development for ACEC.
Still, Goldsmith, an ecology, evolution and behavior graduate student in the College of Biological Sciences, advocated removing gender assignments for single-stall bathrooms, better delegating responsibilities within COGS and raising the floor for graduate student pay.
“Continuing the message about keeping communication open … is important,” he said.
Additionally, Goldsmith said mental health, which he called a “stubborn issue,” will be addressed by the group throughout the year.
Plans to work together with the Professional Student Government and the Minnesota Student Association also extend into next year, he said.
“When you have a shared voice, it can be powerful,” Goldsmith said.
Though his message was primarily positive, Goldsmith criticized decentralized career services for graduate students.
He said many students come out of the University well-prepared for the workforce but lack the “polish” that career services can provide.
COGS members said the low event turnout was the result of only a few days’ notice for the event.
“No. 1 way to do outreach is to build relationships,” said COGS speaker Lauren Mitchell. “We got a late notice on the event … which makes it particularly hard as grad students.”
On his re-election website, Goldsmith highlights issues that he has worked on, including removing racial descriptors from crime alerts, advocating for Whose Diversity? during a Morrill Hall sit-in and pushing for the approval of MSA’s affirmative consent policy. As an undergraduate at Purdue University, he was the president of the Queer Student Union.
ACEC’s next event, a PSG debate, will be held Wednesday.
Delete Image
Align Left
Align Center
Align Right
Align Left
Align Center
Delete Heading