Tuition won’t rise for some, but all students will see a fee hike. 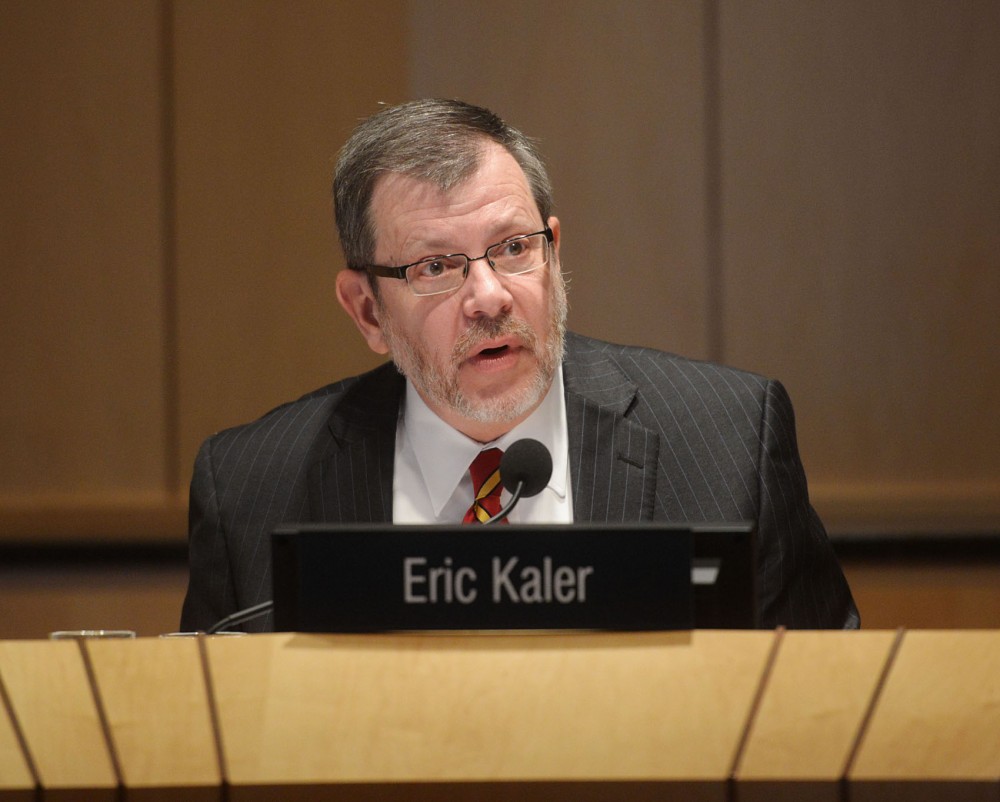 President Eric Kaler addresses the Board of Regents June 14, 2013, at McNamara Alumni Center.

While some at the University of Minnesota will see tuition freeze for the next two years, the cost of attending school will increase for all students.

The Board of Regents approved President Eric Kaler’s budget Friday that will hold tuition at $12,060 for resident undergraduates until fall 2016.

The freeze comes with an increase in student services fees and additional fees increases for certain students, classes and programs. Tuition will also rise for non-resident and graduate students.

“The hallmark of this budget is our commitment to affordability and access for Minnesota resident undergraduate students,” Kaler said at the Regent’s meeting.

While many were pleased with the tuition freeze, some — like state legislators — were irked by the additional costs to students.

In addition to a nearly $100 student services fees increase, Kaler’s 2014-15 operating budget will raise fees for all Carlson School of Management students and international students.

All Carlson students will have a $500 fee per semester in addition to their tuition. The fee was instated last year at $250 per semester.

“This is really a fee designed to provide additional services to help these students be successful academically, so it would be for things like advising or tutoring,” said Julie Tonneson, associate vice president for budget and finance.

Some course fees and study abroad program costs will also increase, she said.

Room and board will increase by more than $300 for University housing next year to compensate for higher food costs and the cost of the new dorm on 17th Avenue, according to the operating budget.

Despite the additional housing cost, the University’s housing is still less expensive than at many colleges around the country, said Richard Pfutzenreuter, the University’s vice president and chief financial officer.

State legislators have praised Kaler’s budget for holding the line on resident undergraduate tuition, but some are concerned by the fee increases.

“I am pleased that the University kept their commitment to keep the tuition flat,” said Sen. Terri Bonoff, DFL-Minnetonka, who heads the Senate’s higher education committee. “But I would have preferred that the student fees were not raised.”

Rep. Gene Pelowski Jr., DFL-Winona, Bonoff’s counterpart in the House, has been especially critical of the University’s finances in the past year.

“I think, especially in the last few years with the recession, the solution has been to raise fees,” he said. “But why don’t they go away? There might be better ways to do it.”

In addition to fees increases, many students won’t see a tuition freeze.

Tuition will increase for non-resident undergraduates and graduate and professional students. First-year resident law students will have the highest increase at nine percent.

“I feel like we shouldn’t have a Kelly Blue Book for tuition,” she said. “We should know what [tuition] costs and … have students know what the cost is to them.”

Andrew McNally, incoming president of the Council of Graduate Students, said graduate tuition increases could be detrimental to the University in the long run, because highly qualified students might choose to go elsewhere.

“Particularly at a University, grad students are what makes it function,” he said. “They do so much of the research at a major university — they are a major draw for the faculty.”

Though a number of student costs will increase, some sources of student aid — from scholarships to health resources — will receive more funding in the coming year.

The budget includes nearly $3 million for merit-based financial aid programs. Some of the funds will help recruit students from non-reciprocity states, who pay higher tuition.

In light of a nine percent uptick in counseling service requests in the past decade, the budget also sets aside funds for mental health resources from Boynton Health Service next year, according to Ferdinand Schlapper, Boynton’s director.

Board Chair Linda Cohen said she’d like to see preventative measures taken on the issue, including educating freshmen on mental health resources during orientation.

This funding includes the final addition to the University’s Biomedical Discovery District, which will receive $63 million in the coming year, bringing the total funding for the district to nearly $300 million.

The building’s cost drew questions from several board members, but Regent John Frobenius said it makes sense to him.

“If you think about the importance of issues in the world … this may in fact be one of the most important buildings and projects the University gets in,” he said.

An additional $2 million  in Kaler’s plan will be allocated to finish construction on Northrop Memorial Auditorium. The new Recreation and Wellness Center and the 17th Avenue residence hall will also be completed in the coming year.

Much of the University’s planned construction for next year has been delayed due to the failed bonding bill in the Legislature in May.

In addition to approving both budgets, the board elected new internal leadership and reviewed Kaler’s performance during his second year in office.

In a split vote, the regents selected Richard Beeson as chair. Beeson, who joined the board in 2009, will replace Cohen in July.

After the vote, Cohen delivered Kaler’s review, describing his performance as “stellar” and adding that his decision-making style has “increased the pace of change within the University at a critical point in its history.”

Last year, Kaler got a similarly glowing review from the board, plus a three percent raise, which he donated to undergraduate scholarships.

The board will consider any potential pay increase for Kaler this year during their July meeting, according to University spokesman Matt Hodson.