The exhibit at the Science Museum of Minnesota features pieces of the only pirate ship ever discovered. 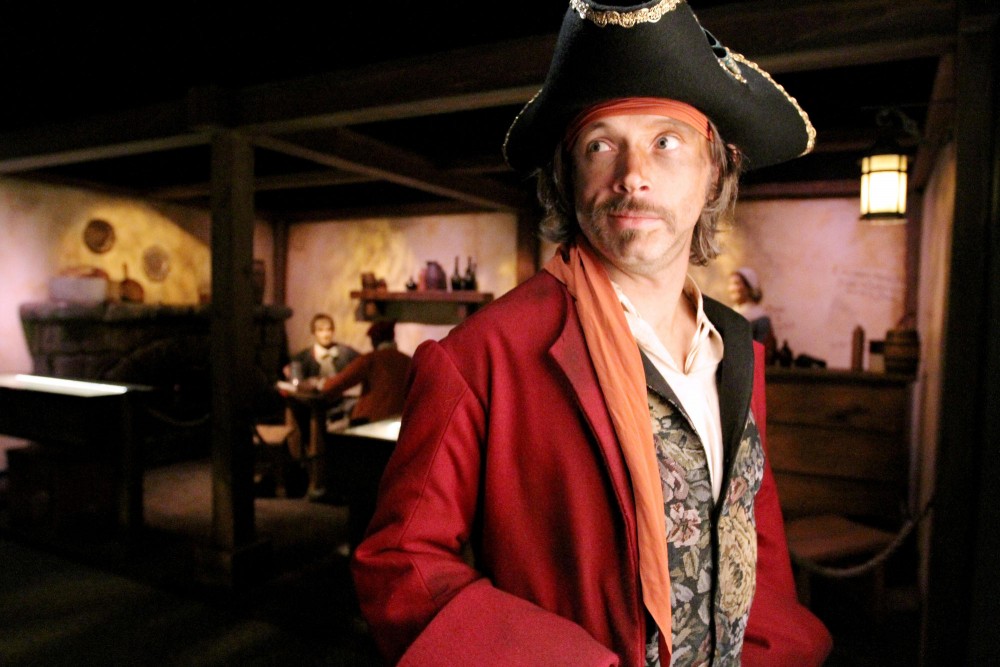 Captain Sam Bellamy, played by Stephen Pearce, makes the rounds at the new exhibit Real Pirates at the Science Museum in Saint Paul.

The audience watched the screen as a reel of waves crashed over the sides of a sinking 18th century ship. Lightning flashed and thunder crackled.

As the film ended, the screen rose to reveal a solid-bronze bell entombed in a chamber of salt water.

The bell is one of the last remaining pieces of that ship, the Whydah Galley — the world’s only discovered pirate ship — and a key component of the “Real Pirates” exhibit, which opened Saturday at the Science Museum of Minnesota in St. Paul.

“These are the only authentic pirate ship artifacts that have ever been recovered,” said Mike Day, senior vice president at the Science Museum.

Along with other pieces of the ship and pirate artifacts, the bell will be on display at the museum until September.

Discovered in 1984 by explorer Barry Clifford and his team, the artifacts have been in museums on the east coast for years. For the past five years, they’ve toured major museums in the U.S.

The Whydah was a slave ship that launched from England in the 18th century and made regular trips to the West Indies to trade goods in exchange for slaves.

But on one routine trip, the Whydah was overtaken by the famous pirate Sam Bellamy.

The English-born Bellamy moved to Cape Cod at a young age where he fell in love with a woman named Maria Hallett. But the poor, young Bellamy couldn’t support Hallet so he left for a life at sea, soon turning to piracy where he took the Whydah and many others.

But, as the story goes, while sailing back to Cape Cod to see Hallett, the Whydah was caught in a storm just off the coast, and it sunk, along with Bellamy and many of his shipmates. As Clifford put it, Bellamy “returned home to Hallett but died at her doorstep.”

For Clifford, the ship was part of his own history. Growing up in Cape Cod, Clifford said every kid knew the story of the Whydah.

“As a kid growing up, it’s a pretty infectious story to hear that there maybe is a fortune in treasure a few hundred yards offshore,” he said.

A history major in college, Clifford dabbled in other ventures like coaching football before turning his full attention to his childhood dream: finding the Whydah.

In 1982, Clifford and a team of archeologists and underwater excavators began searching for the Whydah. After two years, they still hadn’t found it.

Thanks to Clifford’s find, the Science Museum has on display hundreds of artifacts like swords, belt buckles, sawn-off muskets and heaps of actual silver and gold coins that visitors can touch.

The walls are adorned with historic items and history of the times alike.

The writings on the walls describe pirate life, the tools they used and the lives they lived — something Day said is an essential part of the exhibit.

“Many kids have the impression that pirates were fictional,” Day said.

Day said the exhibit’s stop in St. Paul is unlike any of its previous four because the museum has a troupe of actors working at the exhibit every day as pirates.

“We’ve done extensive historical research. They are well trained into who they are as a historical character. They are costumed. We even have a dialect coach,” Day said, brimming with enthusiasm.

While Minnesotans get to experience the exhibit at the museum, University of Minnesota students are learning about pirates in the classroom of Jeffrey Pilcher’s class “Pirates of the Caribbean.”

Pilcher, who has a doctorate in history, said students learn about actual pirates in early modern history and compare them to fictional representations like Robert Louis Stevenson’s “Treasure Island.”

“I think there’s always been something very captivating to the public about pirates,” Pilcher said.

Pilcher said while there’s not a class field trip planned, he will encourage his students to go to the exhibit.

Pieces that are still not fully uncovered are also on display at the museum. They sit in tanks of salt water that keep the artifacts intact and slowly wash away the iron concretions that have formed around the pieces over the past 300 years.

Clifford is continuing his childhood excursion, searching for more ships around the world off the coasts of Haiti, Madagascar, Venezuela and Uruguay. He and his team are also working to uncover the final pieces of the Whydah.

“What more fun could you have?” Clifford said. “Give me a break. Why would I ever stop doing this?”