Kaler stressed the importance of the school's $238.5 million capital request to state lawmakers on Tuesday. 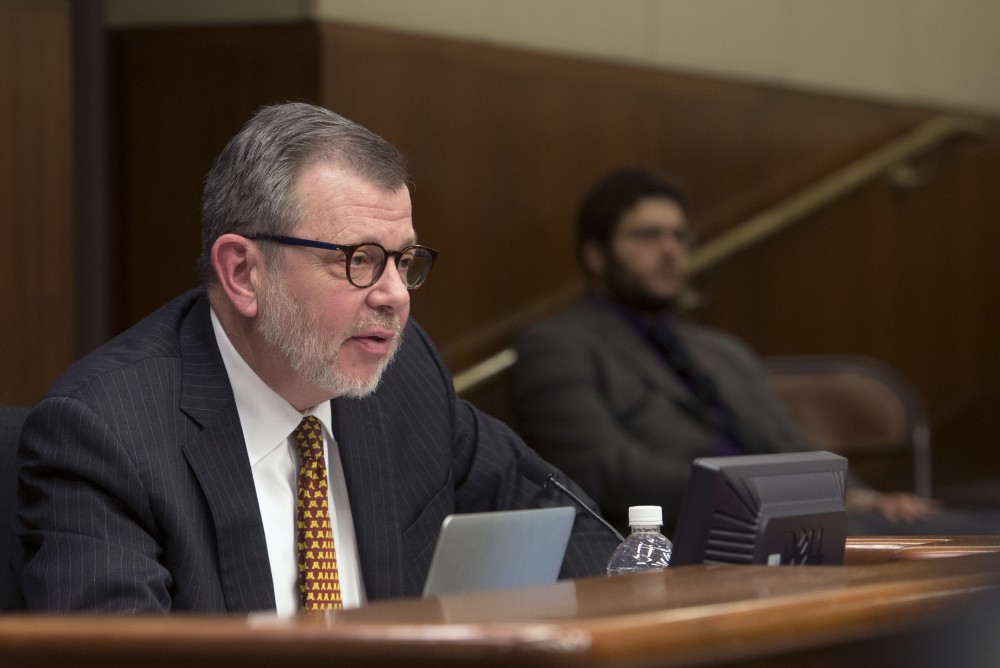 University President Eric Kaler speaks to the House of Representatives' committee on higher education at the Minnesota State Office Building in St. Paul on Jan. 24, 2017.

Kaler stressed the University’s need to revamp current facilities instead of asking for “shiny new objects.” The University is asking for $238.5 million in its 2018 capital request.

“Our request is focused on renovating, restoring and remaking the oldest pieces of our 29 million square feet across our campuses,” Kaler said at the hearing. “Our capital request this year is about transforming our facilities, some of them built in the 19th century, into the 21st century places of teaching and research for students and faculty.”

“When I started classes at the U, I was a bit surprised in seeing our great facilities in disrepair, whether a leak in the library basement or the ceiling falling apart in the tunnels on my way to class,” Hurst said at the hearing. “As students, we find this HEAPR request essential.”

The renovated building would house the English department, which currently shares space in Lind Hall with the College of Science and Engineering.

“[The renovation] is an incredibly important way to enhance that community and make the English department as beneficial to students as it possibly could be,” Benning said.

Kaler stressed the importance of investing in these renovations now and said they’ll only grow more expensive as time passes.

Rep. Raymond Dehn, DFL-Minneapolis, said HEAPR funding is an important part of the bonding bill. Still, he said he doesn’t think the University’s capital request will be fully funded and that the school’s final appropriation will depend on the size of the bonding bill.

“They’re not going to get everything they asked for. There’s just not going to be that big of a bonding bill this year,” Dehn said. “But I think some of the key priority projects, they’ll be able to get funded.”

“I don’t think there’s anything in that request that isn’t needed. It just comes down to how much we can do,” Urdahl said.