Gophers women’s hockey rebounds in Bemidji with a sweep

The women responded after a tough stretch of their which saw them lose three of four. 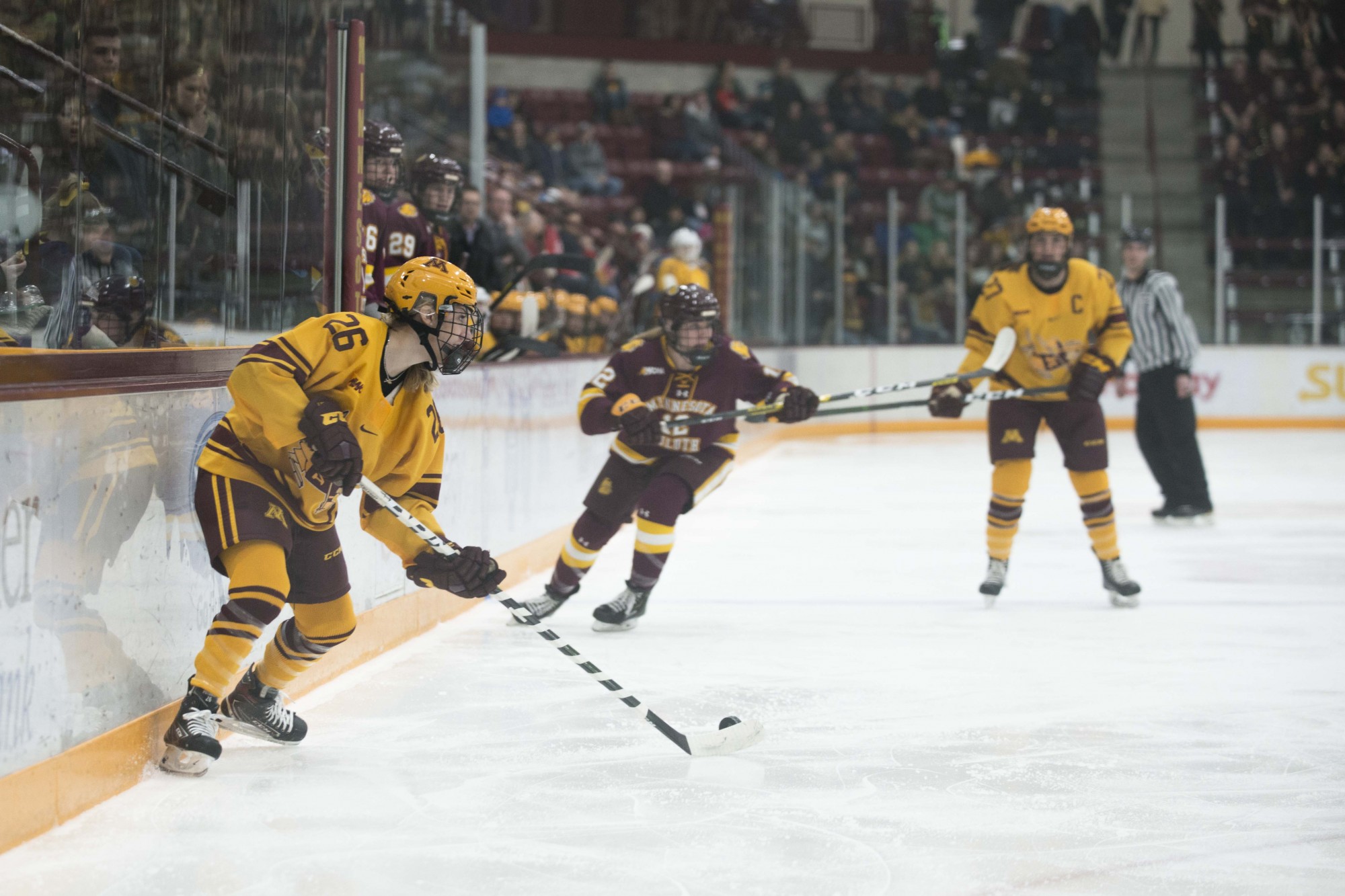 Forward Sarah Potomak looks to pass the puck at Ridder Arena on Saturday, Feb. 1. The Gophers lost to Minnesota Duluth 0-2.

After being ranked in the top-two all season long, the Gophers’ women’s hockey team found themselves in an unfamiliar spot dropping to fourth in the national rankings. Yet this weekend, Brad Frost’s team reminded everyone how difficult Minnesota is to play as they got back on track beating Bemidji State 4-1 on Friday and 6-3 on Saturday.

Heading into the weekend, Gophers forward Grace Zumwinkle said that their best chance at getting a victory was striking early.

That was not the case on Friday.

Luckily the Gophers defense, led by Emily Brown and Olivia Knowles, didn’t let Bemidji State get anything close to the net in the first period.

And while Minnesota didn’t score in the first, they were able to jump out to a lead early in the second period as Alex Woken netted her 13th goal of the season. Once again, Bemidji State was held without a goal in the second period thanks to Sydney Scobee’s play. She finished with 15 saves.

“We managed the puck exceptionally well and got great goaltending from Scobee,” Frost told GopherSports.

Although Bemidji State added a goal, the Gophers scored three third period goals including a second by Woken.

Overall, Friday was a great bounce back game for the Gophers. But, that could’ve been said last week against Minnesota-Duluth after a 5-0 win. They were shut out the next day. This time around, the Gophers had no issues.

Unlike Friday’s game, which saw Minnesota grab a lead and never relinquish it, Saturday proved to be a back and forth battle as the teams matched each other goal-for-goal until the Gophers exploded for three third period goals to seal the 6-3 victory.

“Solid win here on the road tonight,” Frost told GopherSports. “This is a tough place to play.”

Minnesota took an early first period lead off a goal from Sarah Potomak. But just a few minutes later, Bemijdi answered with a goal from Reece Hunt, a common theme for the evening.

After Minnesota’s Crystalyn Hengler found the back of the net five minutes into the second period, Hunt answered a minute later to lock the game at two.

Later in the second period, Zumwinkle put the Gophers up once more. But once again, Hunt struck back, scoring her third goal of the game.

“The second period was kind of a crazy one for both teams, giving up goals and exchanging goals,” Frost told GopherSports. “Our team found a way there in the third to come out and score a quick one and then add to that and extend the lead. We just played really well down the stretch, which was big.”

With the score tied at three, Taylor Heise connected on a goal early in the period, and for the first time in the game, Hunt and Beavers couldn’t answer back.

Zumwinkle and Kippin Keller added a goal each near the conclusion of the game, giving the Gophers earned their first series sweep since Jan. 11.

“This is a big six points on the road,” Frost told GopherSports. “We needed them. We’re excited now to head home and have a weekend off and then gear up for the rest of the WCHA season.”

Up next, the Gophers come back home to play Minnesota State on Feb. 21.