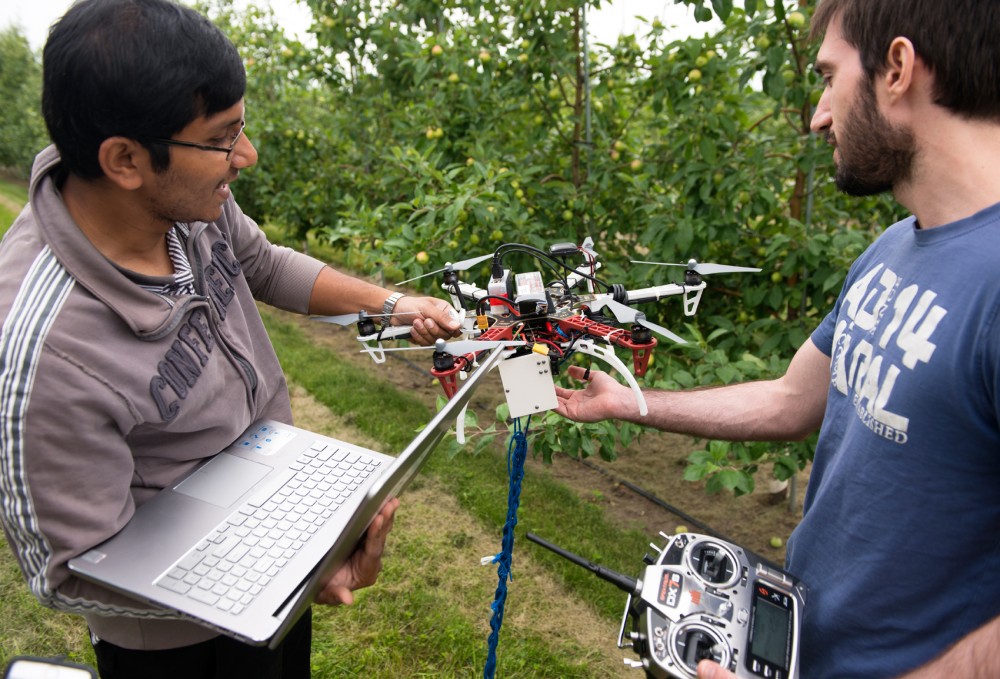 Parvakar Roy hands over drone to Graduate Student Nikolaos Stefas at University Arboretum on last Wednesday. A University group of undergraduates, graduates, and professors is in the process of developing a drone with the capability of aiding farmers by giving them information about their crops.

Sarah Thamer
At a field experiment last week, a drone leashed like a dog to a University of Minnesota graduate student slowly rotated, drifting mere feet above the group and capturing images of apple trees at the Minnesota Landscape Arboretum. A student nearby controlled the drone from a laptop, moving it slowly along the rows of trees.
Though the battery-powered drone can only fly for about 10 minutes, the lab that created it hopes it will soon be able to detect plant diseases and nutrient deficiencies in orchards and farms. The robot, which is the focus of an upcoming University of Minnesota paper, exemplifies a growing movement toward using drones to assist in agriculture.
The field, called precision agriculture, uses drones fitted with GPS and cameras to estimate yields and monitor crops.
David Mulla, director for the University’s Precision Agriculture Center — the first of its kind in the world — said researchers and farmers are increasingly using precision agriculture technology. He said use of robots offers greater flexibility for farmers, allowing them to monitor small areas in fields.
“Precision agriculture is in the top 10 revolutions for agriculture,” Mulla said.
Jonathan Chaplin, a professor in the Department of Bioproducts and Biosystems Engineering, said precision agriculture’s main purpose is to reduce costs and the environmental impacts from farming.
“I use drones because they are relatively inexpensive nowadays. But there are limits to what you can do with them and what they can see or measure,” Chaplin said.
Drones allow farmers to tailor the amount of fertilizer, pesticides and herbicides they use, which can have a negative impact on the environment. Using the technology allows farmers to monitor the use of fertilizer, he said.
The Federal Aviation Administration has proposed safety regulations for the use of commercial unmanned aircraft systems. According to the proposal, an unmanned aircraft must weigh less than 55 pounds and fly no higher than 500 feet above ground level with a maximum speed of 100 mph.
Though the use of drones has proliferated, the technology isn’t perfect. The large batteries required to run them weigh down the robots and subsequently require more power for them to operate.
Chaplin uses drones to monitor the cows and crops on his own farm. Chaplin said drones operate at fairly low altitudes across fields, and hazards only arise when used irresponsibly.
Still, concerns regarding drones are common. Volkan Isler, an associate computer science professor who heads http://rsn.cs.umn.edu/index.php/Main_Page, said those concerns are legitimate.
“If people fly drones near airports, this can be very dangerous. There are also privacy-related concerns,” Isler said.
Drones, at least in the public eye, have largely been relegated to the military, Chaplin said, which has made some people fear their use.
“I think this is the future of farming, and the public should not be threatened by this activity,” Chaplin said.
Real world weather conditions can cause the robots to operate differently than when in the lab, which can be a challenge when experimenting with a drone, said Pravakar Roy, a computer science graduate student who works in Isler’s lab.
“This is the kind of setup that challenges me most. Once you use this outside, the imaging becomes more difficult. We have to adapt to the weather conditions,” Roy said.
Despite barriers, farmers are looking forward to using drones in their work, said Jim Luby, a professor in the Department of Horticultural Science.
He said precision agriculture can gather and analyze more data than individual people could in the past. The technology has many potential applications, he said.
“It’s allowing farmers to become better stewards of the land and environment,” Chaplin said.
Delete Image
Align Left
Align Center
Align Right
Align Left
Align Center
Delete Heading