Pettersen steps in at shortstop

The sophomore had five hits in 12 plate appearances in the team’s last series. 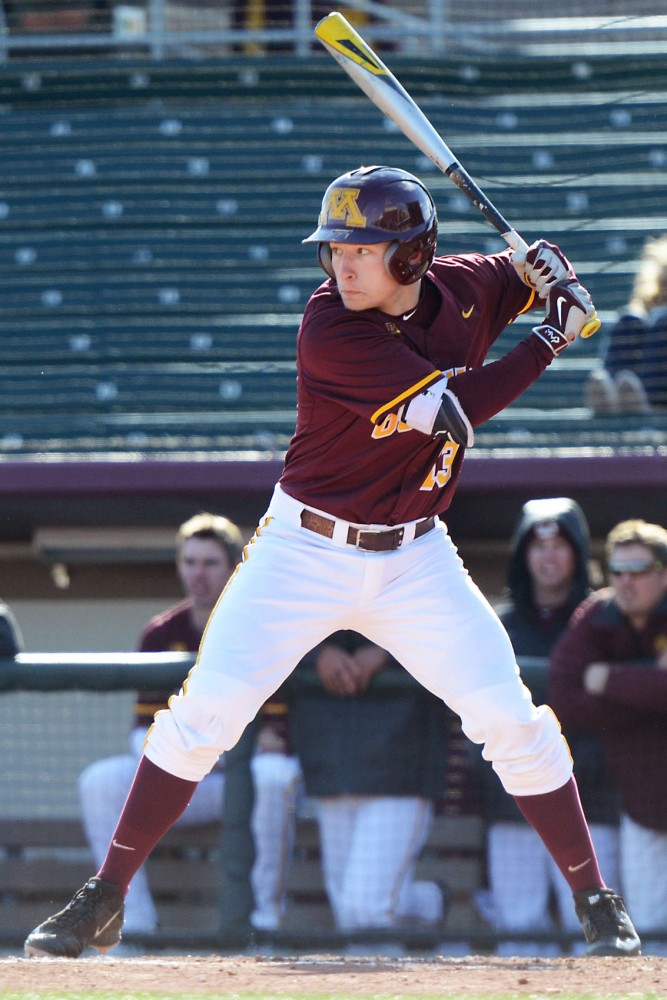 Sophomore Luke Pettersen prepares to bat at Siebert Field on April 1, where the Gophers faced the University of Iowa.

Kaitlin Merkel
Early last week, Gophers head coach John Anderson and sophomore Luke Pettersen met in Anderson’s office to discuss the infielder’s decreased playing time.
Pettersen had more starts earlier in the season at second base. The team’s regular second baseman, senior Connor Schaefbauer, filled in at first base while sophomore Toby Hanson missed six weeks due to a dislocated elbow.
But when Hanson returned to the starting lineup on April 6, Pettersen went back to a role off of the bench.
“I tried to tell him to stay ready because he played a lot early … then he’s kind of been in the background,” Anderson said. “I told him, ‘There’s going to be an opportunity. Sooner or later, something’s going to happen; it always does.’”
Anderson was right. Shortstop Terrin Vavra was injured and missed the Gophers series against Maryland last weekend. Pettersen started all three games at shortstop and tallied five hits over the weekend.
“It was a great opportunity for me,” Pettersen said. “I just tried to do whatever I can do to help the team win this weekend, and we did.”
With Pettersen in the lineup No. 25 Minnesota won its fourth consecutive series, which moved the team into the national rankings for the first time since 2009.
“I thought [Pettersen] was a big part of the series. He played phenomenal on defense for us and chimed in with some good at-bats and some hits for us,” Anderson said. “You’re only as good as the next man in, and we have some depth.”
Pettersen’s older brother, AJ, also was an infielder for the Gophers and earned First Team All-Big Ten honors his junior season. He left the program after being taken by the Minnesota Twins in the 25th round of the 2011 MLB Draft, and Luke Pettersen said his family connections drew him to Minnesota.
Anderson said the Minnetonka, Minn., native, however, had plenty to prove coming into college.
“Luke was probably a tweener out of high school. … He was in between a Division I and a Division II player,” Anderson said. “We bet on the fact that he was going to come here and work his tail off, and … so far, it looks like he has.”
Pettersen is batting .311 with 19 hits and six RBIs through 16 starts this season. Even if he goes back to a role off the bench, the depth he provides to the team’s lineup is one reason the Gophers are back in the rankings.
“When my name is called, I just have to be ready,” Petterson said.
Delete Image
Align Left
Align Center
Align Right
Align Left
Align Center
Delete Heading