The varied love stories of UMN

This Valentine's Day, unconventional couples share their stories with the Minnesota Daily. 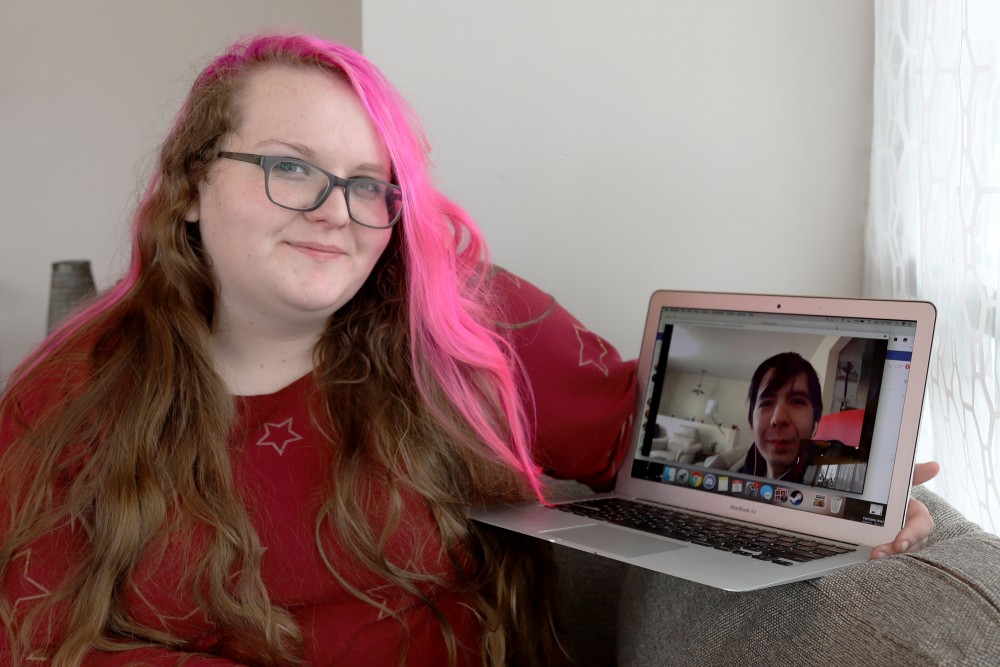 Anna Sherlock, left, and Ron Biggs, right, pose for a portrait during their Google Hangouts date on Saturday, Feb. 9 in Minneapolis. Sherlock and Biggs have only met in person once, but consider themselves in a relationship, and have plans to visit each other in the future.

Among thousands of University of Minnesota students, some couples have found happiness despite eyebrow-raising from their peers. From the strings of wedding bells to “no strings attached” and everything in between, couples in unique relationships shared their stories this Valentine’s Day.

Anna Sherlock and her boyfriend got married before they ever started dating. Of course, they didn’t get married in real life, just on the online gaming platform Minecraft.

Although they’ve been in a relationship for five months, the two met for the first and only time in person last October. Sherlock, a Carlson School of Management student, said that distance isn’t a huge issue for her, which is helpful as her boyfriend lives more than 1,200 miles away in Edmonton, Canada.

“It’s definitely different. But I’d say I actually prefer this … because I’m doing a full-time internship right now, and I’m also going to school full-time and I just don’t have time for things,” Sherlock said.

Reactions to their relationship have been mixed, she said. While many of her friends are supportive, others think that romantic bonds are too difficult to form over webcams.

“You need to find your own happiness; I’ve found mine. Just be happy for my happiness,” Sherlock said.

A second-year student at the University, who declined to reveal her identity for privacy reasons, is in a casual relationship with a man in Iowa. The couple has occasional sex with no romantic feelings, otherwise known as “friends with benefits.”

“It’s very honest, there’s no pretending that it’s one way or the other. It is pretty much strictly sexual. We just meet up, have sex or send sexual content of ourselves to each other,” she said.

Of course there are ground rules, she said, like routine screenings for sexually transmitted diseases and absolutely no sex if one is in a committed relationship.

Her friends are often surprised that she has been in an on-again, off-again friends with benefits relationship since age 14. She said the relationship isn’t going any further than that, which she prefers.

“It can be a fallback, in a way. Like if I’m talking to a boy and it doesn’t really go anywhere, I can just turn around and say, ‘At least I can have sex with this guy,’” she said.

According to her, it really comes down to comfort around each other and fulfillment of needs that each other has.

“It’s someone I feel really safe with. It’s a guaranteed good time,” she said. “If I agree to meet up with him, I’m not going to be nervous or wonder if it’s worth my time, because I know it is.”

In contrast, fourth-year students Alyssa Nelson and Daniel Olson, who met their junior year of high school in band, have been engaged for over a year.

Olson proposed to Nelson last January and had it all planned out: they would be heading to see the Stillwater ice castles, and he would pop the question there. However, the two ended up stuck in a snowed-in parking lot.

Just because they are engaged doesn’t mean their lives differ that much from other college students. In addition to the added stress of college life however, Nelson and Olson are planning a wedding.

“I’ve known Daniel enough to where I’m not worried, I’m only excited,” Nelson said. “A lot of people tend to think that, when you’re engaged, you’re giving up on the fun parts of life, but I’m just excited because I have someone who I can share all the fun, new things that are happening in life with.”