The accident was at the intersection of University Avenue Southeast and Huron Boulevard. 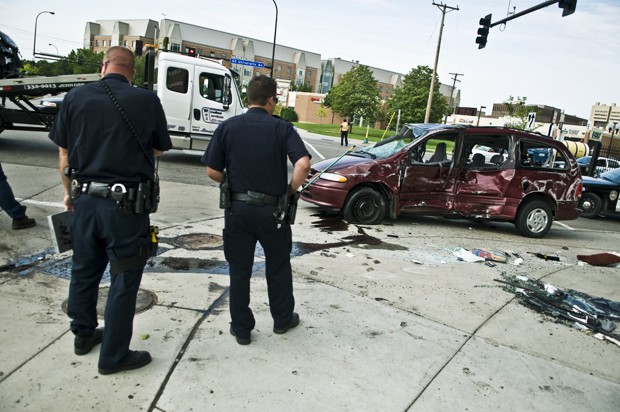 A vehicle collided with another at the intersection of University Avenue and Huron Boulevard at about 9:30 a.m. Thursday, causing both to spin out and one to flip over. Francisco Vuong-Deo-Campo, 46, said he was driving north along Huron Boulevard when a woman driving northwest along University Avenue ran a red light. His vehicle struck her van in the intersection, causing the van to flip over several times and land on its side. âÄúEither she didnâÄôt pay attention to the light, or she did not see the light,âÄù Vuong-Deo-Campo said. âÄúI hit my brake, but I didnâÄôt have enough time.âÄù The womanâÄôs son was in the vehicle at the time of the collision but was not seriously injured, Minneapolis Police officer Michael Welsh said. Their names are not being released at this time. The woman was taken out of the van by officers at the scene. She was conscious and taken away in an ambulance. Welsh said her condition is unknown. Vuong-Deo-Campo said he has worked at Village Wok for 26 years and was on his way to work when the accident happened. âÄúI was shaking,âÄù he said. âÄúI was like, âÄòwhat happened?âÄôâÄù Despite the collision and his vehicle being towed, Vuong-Deo-Campo said heâÄôd still go in to work.