After a promising first drive, the Gophers’ offense wasn't the same. 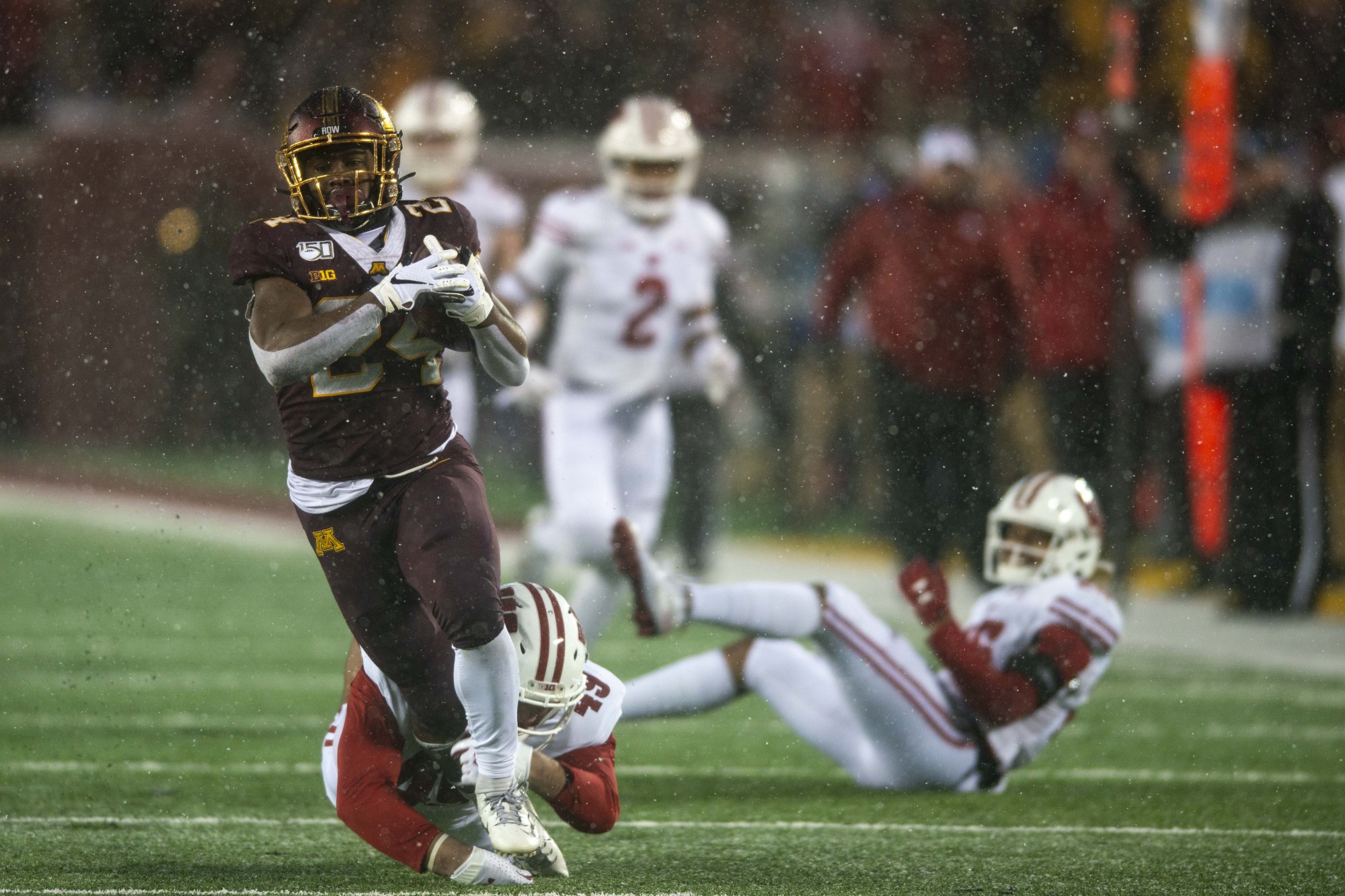 Running back Mohamed Ibrahim runs the ball during the Gopher game against the Badgers at TCF Bank Stadium on Saturday, Nov. 30.

In a game that decided the winner of not only Paul Bunyan’s Axe but also the Big Ten West, the Gophers’ offense fell flat, especially after the loss of right tackle Daniel Faalele. Faalele did not return after getting carted off in the first quarter. Without Faalele, the Gophers’ offense stalled entirely, turning the ball over and getting shut out in the first half after their opening drive when redshirt sophomore Tanner Morgan hit sophomore receiver Rashod Bateman for a 51-yard touchdown. Despite the early Minnesota strike, Wisconsin went into the half with a 10-7 lead.

“When we lost [Faalele], there’s no excuses,” head coach P.J. Fleck said. “We got to do what we got to do, but it took a whole package away from what we were going to do.”

Getting the ball first after halftime, the Gophers looked to recover from their lackluster offensive performance, but failed to do so in their first offensive possession. Minnesota punted, setting up a 91-yard Wisconsin touchdown drive that put the Badgers on top 17-7. The Gophers had a promising ensuing possession, but a run for no gain on third-and-10 halted the Minnesota drive as they settled for a field goal, making it a one-possession game. The Minnesota points didn’t phase the Badgers, returning the kickoff deep into Gopher territory and punching in another touchdown to extend their lead 24-10.

Toward the end of the third, the Gophers finally put a drive together, pounding the run up the middle and hitting senior receiver Tyler Johnson down field. Minnesota closed out the third deep in Wisconsin territory with a chance to make it a one-score game right away in the fourth. But ultimately, the Badgers made a goal-line stand, keeping the Gophers out of the end zone and maintaining their two-score lead.

“I think there were some critical plays. When it was 24-10, we don’t get the touchdown,” Fleck said.

On their following possession, Wisconsin notched their third straight touchdown, as Jonathan Taylor finally broke through, scampering 11 yards for the score. A blowout was in the making as Wisconsin led 31-10.

The offensive troubles continued for Minnesota on their next drive. Morgan got sacked for a fourth time in the game, fumbled and Wisconsin jumped on it, getting the ball once again deep in Minnesota territory.

“I can’t turn the ball over, can’t have a sack, can’t throw an interception,” Morgan said. “That’s all on me. I got to be better in the pocket.”

Taylor punched it in from one yard out, extending the lead 38-10 and embarrassing the Gophers at TCF Bank Stadium. Morgan hit Johnson for a score late in the fourth, in which Johnson tied the program record for most receiving touchdowns with 31 for his career. Unfortunately for Minnesota, it came too late. The Badgers leave Minneapolis with the Axe and the Big Ten West crown.

The Gophers will now anxiously await the announcement of their upcoming bowl game, Minnesota’s final chance at redemption this season.