The Gophers senior is 25 years old and now is an assistant captain for the men's hockey team. 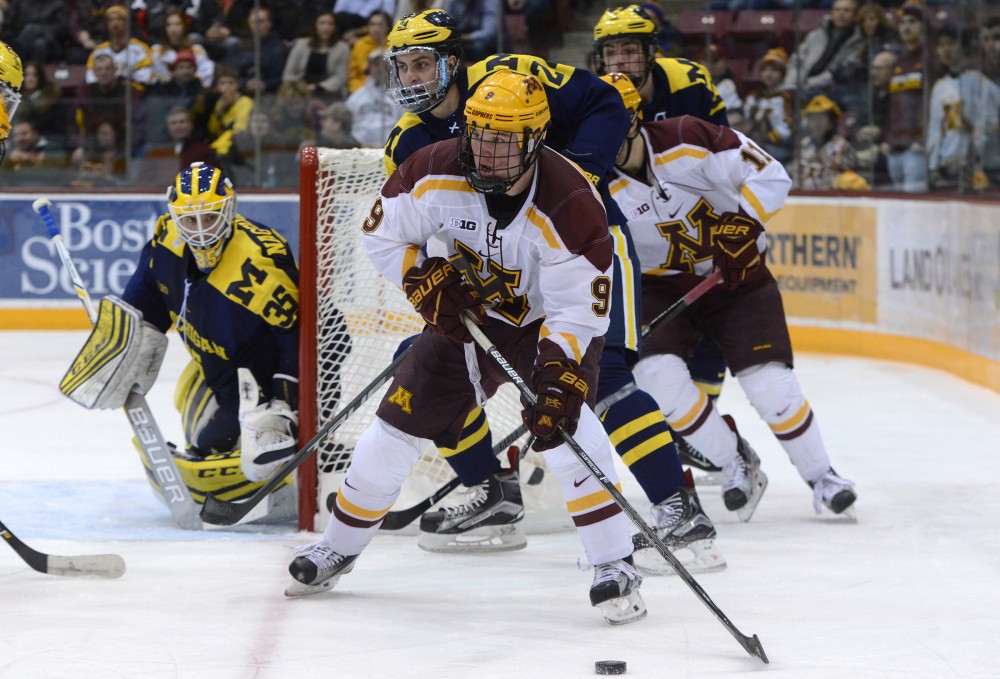 Forward Mike Szmatula’s hard work shows both on and off the ice.

Szmatula has used a combination of faith, family and gritty play style to elevate himself and become an assistant captain for the Gophers at 25 years old, and to get through all the change in his career after he began playing college hockey at 21.

“A lot of times I felt like being undrafted, I had to work my way into juniors, and then to college, a lot of times I would have stopped,” Szmatula said. “But my parents always kept believing in me, and made me believe in myself, I would not be here if it wasn’t for them.”

Family is important for Szmatula, and being far from home makes it a bit harder to keep in touch.

“It’s tough with them being far away,” Szmatula said. “I am an only child so it’s just us three, we’re really close. Those are the people I rely on for support.”

Szmatula has had a long and interesting road from his home state of Michigan, going many different ways before finally landing with the Gophers.

He was drafted 219th overall in the United States Hockey League Entry Draft, but he never played for the team that drafted him.

The team that ended up with Szmatula was the Dubuque Fighting Saints, with whom he would go on to win the Clark Cup in 2013, and be named most valuable player of the Clark Cup after scoring 12 points in 11 games of the playoffs.

After Szmatula played juniors, he headed out east to Northeastern University, where he played the first two years of his college hockey career.

Then, after sitting out a year for transferring, Szmatula found himself on the Gophers roster.

“I’d probably need a novel to write it,” Szmatula said. “I just kept working hard, and I followed wherever I felt God wanted me to go.”

Szmatula said there were times he thought his playing days were over, but he repeatedly told himself things would work out.

That mentality hasn’t escaped Szmatula on or off the ice.

Now he’s an assistant captain in the Gophers four-man leadership group and is leading many of the younger guys on the team.

“It’s a privilege,” Szmatula said. “[I] probably never would have guessed I would even be here five years ago. To be a captain is a huge honor. I’m not trying to change anything, just trying to do the same thing I do, bring the same qualities [and] work ethic.”

That work ethic has taken Szmatula far from Michigan, with a few pit stops on the way.

Szmatula plays a gritty game, he plays a lot below the goal line and along the boards behind the opposition’s net.

“He works hard,” said forward Brent Gates Jr. “I think that’s my favorite thing about playing with him. He’s obviously got skill, he can score and he sees the ice well, but, he works hard, he wins battles and he’s always doing the right thing.”

On a Gophers roster with a lot of younger, skill-based players, Szmatula’s play balances that with a more physical style.

“[He’s] very much like [Justin] Kloos and Vinni [Lettieri] were last year,” said head coach Don Lucia. “He’s a bit of a bulldog and he’s got to play that style. He doesn’t have the same skill as a couple of the other guys, but he scores his points through hard work.”