University of Minnesota researcher Dick Bianco has faced wrath and threats from animal rights activists. He’s not about to let them get to high schoolers. 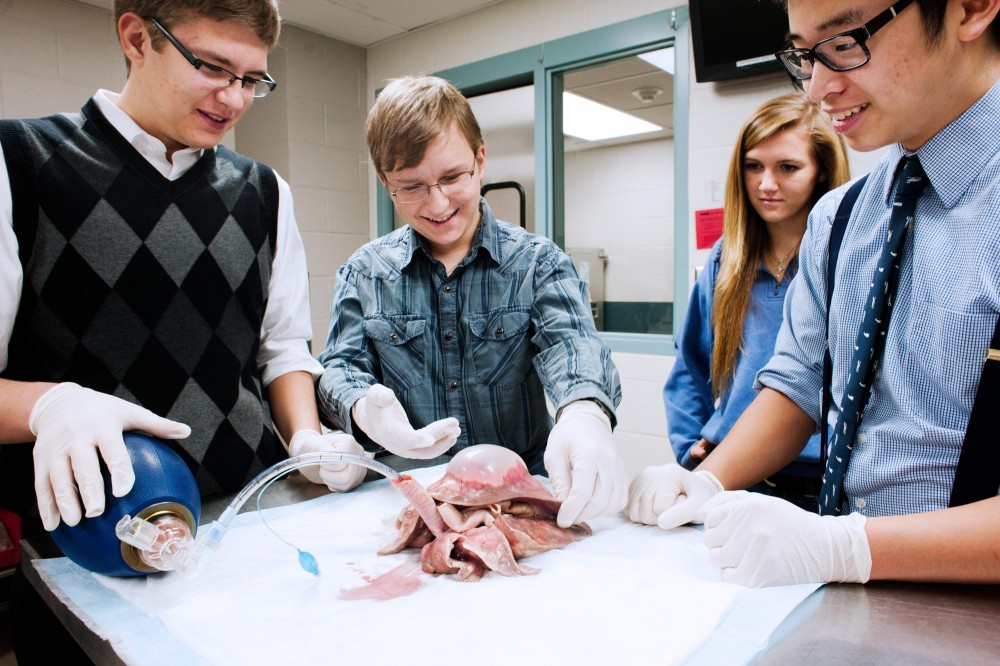 Students from Blaine High School examine a pig heart and lungs Thursday at the Experimental Surgical Services lab. The heart was one station on a tour of the lab, where researchers test medical devices on animals.

Dick Bianco has a panic button under his desk.

As head of Experimental Surgical Services at the University of Minnesota, heâÄôs been the focus of animal rights activistsâÄô rage.

Bianco estimated that up to 300 sheep are âÄúsacrificedâÄù each year as part of his experiments in heart valve research. Pathology staff members kill the sheep with an overdose injection of a drug similar to what a veterinarian would use to euthanize a pet.

Bianco speaks out in support of animal experimentation and accepts his status as a public figure of the biomedical research industry. But he sees it differently when animal rights groups try to influence students.

âÄúMy solution is to bring the students to us,âÄù he said. He invites high school students to his lab for field trips to âÄúcounteractâÄù PETAâÄôs message that using animals for research is wrong.

Bianco tests heart valves in animals before the valves go on to human trials. He proactively promotes research like this, which has drawn threats in the past.

Activist Camille Marino, out of Florida, posted a threat against Bianco on her website negotioationisover.net in 2009.

âÄúWe should not be surprised when the unconscionable violence inflicted upon animals is justifiably visited upon their tormentors,âÄù she wrote.

Animal rights organizations have demonstrated at the University in the past. In 1999, the Animal Liberation Front claimed responsibility for vandalizing research facilities and stealing more than 100 animals.

Frustrated with PETAâÄôs access to high schools, Bianco âÄúinvited himselfâÄù to speak at a high school science teachersâÄô conference about a decade ago.

âÄúLook it,âÄù he remembers saying from the podium. âÄúYouâÄôre letting PETA into your schools âÄî youâÄôre not letting us into your schools. We donâÄôt want to brainwash your kids. What we want to do is expose them to a real medical research laboratory.âÄù

Immediately after his talk, teachers approached Bianco to get information on how to make the tours happen.

Since that day, 10,000 students have toured BiancoâÄôs Experimental Surgical Services lab, he estimated.

âÄúCertainly my agenda is [fighting] the anti-science movement of the animal rights,âÄù Bianco said. âÄúBut it also is, weâÄôre going to have a problem in science âÄî young kids arenâÄôt interested in it.âÄù

Surgeons for a day

The hands moved gracefully, stringing a needle holder into one side of the flesh and threading it out the other. Steadily, they moved down the wound, sewing it up cleanly.

These werenâÄôt first-class surgeons. They were high schoolers, only doctors from wrists to finger tips. They wore jeans, sweatshirts and vests. But their hands were in rubber surgical gloves, and they gracefully stitched up the wounds on makeshift patients âÄî pig limbs.

Meanwhile, Bianco was next door implanting a synthetic valve into a sheep. There was more blood in that room, and some students looked away as they walked by.

In their room, the high schoolers followed along as pre-vet junior and lab employee Amanda compared operating the tools to learning how to use chopsticks and told the students to open up a plastic package âÄúlike string cheese.âÄù

This was one station on Blaine High SchoolâÄôs visit to Experimental Surgical Services last week. Some students were queasy âÄî one fainted after seeing a heart and lung out on a table âÄî but the consensus was that the lab made for a pretty cool field trip.

At another station, students used an âÄúechoâÄù machine to see their friendâÄôs heart and lungs.

âÄúHave you ever seen your heart?âÄù asked science teacher Tim Riordan, who did the same tour as a high schooler. âÄúThis is a first, man. LetâÄôs do it.âÄù

The other six students in the surgery room were mesmerized by the sight and sound of their friendâÄôs insides on the ultrasound.

The next part of the tour was both cute and controversial.

Five sheep sat in grim kennels in a room that smelled like a farm. Bianco asked the Minnesota Daily not to identify the location of the lab for security reasons.

The sheep were brought to the lab either for surgery to implant a heart valve or to get an echo test.

The sheep âÄúabsolutely loveâÄù Fig Newtons, said tour guide and pre-med sophomore Raquel. Except for Fonzie, a past favorite, lab workers generally donâÄôt name the sheep, which are eventually âÄúsacrificedâÄù so researchers can examine their organs.

âÄúItâÄôs kinda hard to name them and get attached,âÄù Raquel said.

At the University, Research Animal Resources is devoted to granting and monitoring the use of animals. Anyone who comes into contact with an animal during a project has some degree of training, said Cyd Gillett, director of RAR.

Once a day, RAR staff members check on every animal âÄî even the mice âÄî in research labs across campus.

The most common infractions RAR catches are procedural, like incomplete or overdue paperwork, rather than instances of actual animal abuse, Gillett said.

But those precautions donâÄôt make animal research OK for People for the Ethical Treatment of Animals.

ItâÄôs âÄúirrelevantâÄù that new medical technology can come out of the research, said Justin Goodman, director of lab investigations at PETA.

âÄúThe ends donâÄôt always justify the means. And animals are like us in all the ways that matter,âÄù he said. âÄúThey feel fear, and they feel pain, and that fear and pain should matter to us too.âÄù

The group campaigns in the classroom by giving software and computers for digital dissections to schools that agree not to dissect real animals.

The group has enabled 75,000 students to use virtual alternatives to dissections, Goodman said. He said the group sees high school dissections as a âÄúgateway issue.âÄù

Bianco said using computers in high school is not a big deal âÄî itâÄôs a basic enough level of surgery. But when it comes to training students to be actual surgeons, real patients are necessary.

Each side of the animal experimentation argument says the other doesnâÄôt tell the whole story.

Goodman said biomedical researchers âÄúdo a lot of hand-wavingâÄù about what happens to animals. Bianco said PETA misinforms high school students about what researchers like him do.

âÄúTheyâÄôre getting the wrong message at school,âÄù he said. âÄúI think that we need to counter that, like with most things, with some facts.âÄù

Riordan said one of his high school students on a previous tour was a PETA member. She was âÄúvery receptive,âÄù Riordan said, but didnâÄôt change her stance on animals in research.

âÄú[The tour is] to simply give [students] experiences so that they can at least have something to point to as far as why they believe what they believe,âÄù Riordan said.

Biomedical research faces a two-part problem, said Paul McKellips, executive vice president of the Foundation for Biomedical Research. The rise of the animal rights movement has collided with scientists who are hesitant to talk about their work.

McKellips said BiancoâÄôs idea to bring kids into the lab is an example of what the research community needs more of.

âÄúScientists typically want to let the science speak for itself,âÄù he said. âÄúAccordingly, as the animal rights movement picked up steam, the scientific community sort of went silent.âÄù

Goodman, from PETA, said Bianco is fighting a losing battle, because public support for animals in research is waning.

One of BiancoâÄôs public relations moves led Negotiation Is OverâÄôs Marino to post the threat on her website in 2009.

Bianco had made himself more visible by joining a national campaign to increase support for animal use in research.

The posting led to increased security patrols for Bianco, who said he has regular contact with the FBI. He got his panic button installed after the Animal Liberation Front break-in.

BiancoâÄôs goal is to ensure kids arenâÄôt turned off from science by extreme acts like that, or even just by materials PETA distributes in schools.

Rachel Rystedt, 16, said she was indifferent about animals in research before touring the lab last week.

âÄúI didnâÄôt know really how I felt about it until I actually saw it,âÄù she said. âÄúI think IâÄôm OK with it, just [with] how I saw the animals were being kept.âÄù

Sixteen-year-old Lauren Anderson thought the tour was âÄúpretty awesome.âÄù She already was interested in biomedical engineering, she said, âÄúbut then this kind of just made me want to do it even more.âÄù

The most extreme acts of the animal rights groups like Negotiation is Over include harassing students that are going into the animal research field.

The group, based in Florida, offers $100 to anyone who identifies University of Florida students involved in animal research. NIO asks for the studentâÄôs name, picture, address and phone number.

One targeted student eventually caved to threats and left her job at a research facility.