The conference achieved its highest RPI this season since 1999. 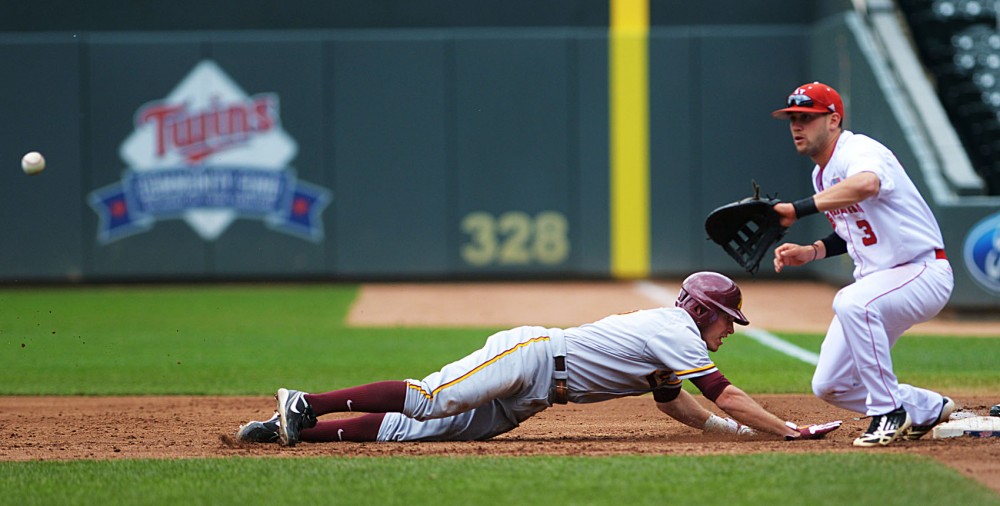 Minnesota catcher Mark Tatera dives back toward first base on May 24, 2013, during the Big Ten Tournament at Target Field.

While no one can control the weather, the winning is well on its way.

The Big Ten finished the 2013 regular season with a .521 ratings percentage index, according to Boyd’s World — good for sixth in the nation. It’s the highest RPI the conference has achieved since 1999.

“I’ve been fortunate enough to be in this conference for 23 years, and far and away, this is the best this conference has ever been,” Illinois head coach Dan Hartleb said.

The Big Ten received two NCAA tournament bids — a measuring stick for a conference’s success — Monday when Illinois and Indiana were named to the field. It’s the second-straight multi-bid season for the Big Ten, which had received just one bid in both 2010 and 2011.

“If you look at the parity that’s been created, it’s just unbelievable to look at where the conference was two or three years ago and where we are today,” Hartleb said.

The conference produced an NCAA regional host for the second year in a row. Big Ten champion Indiana will host a regional in this year’s tournament — a privilege reserved for the top 16 teams in the country.

Indiana won series against traditional powers Louisville and Florida this season. Both of those teams made the NCAA tournament.

“I’ll put [Indiana] up against any team in the country,” Nebraska head coach Darin Erstad said. “They’re that good, in my opinion.”

Advances in facilities, coaching and talent have keyed the conference’s turnaround, said Gophers’ head coach John Anderson. He said the Big Ten is probably the best he’s seen in his 35-year tenure in the conference.

The conference’s top talent could soon be displayed professionally. Six of Baseball America’s top 250 prospects for the 2013 MLB draft reside in the Big Ten, including Gophers pitchers Tom Windle (No. 46) and D.J. Snelten (No. 141).

“Look at the arms Minnesota has — that’s pretty impressive,” Erstad said. “You’ve got a team that didn’t even make the [Big Ten] tournament [in Michigan State] that’s in the top 40 of the RPI. That’s heading in the right direction. You don’t do that without good players.”

The Big Ten Network has increased the league’s visibility. The network scheduled at least 16 regular-season games and every game of last weekend’s conference tournament.

While the Big Ten’s recent improvement is noticeable, some expect more. Despite the cold climate in the Midwest that affects scheduling for most of the season, Bakich said the conference can receive four to five NCAA bids each season.

“It’s getting better,” he said, “but it certainly needs to improve and has room to improve. And there’s a lot of growth potential because we’re all at great schools and there’s tremendous academic institutions.”

While the Big Ten experienced arguably its best regular season in a decade, the success of Illinois and Indiana at the NCAA tournament will have the greatest effects on the conference’s perception.

“We’re really excited about what’s going on in the conference,” Hartleb said. “The number of great players we have, the coaches, the facilities, all of the things that our administrators have done to continue to push our sport forward — makes this postseason part very exciting.”