Flip Phone's hit drag brunches are back, but with masks and electronic tips in light of the pandemic. 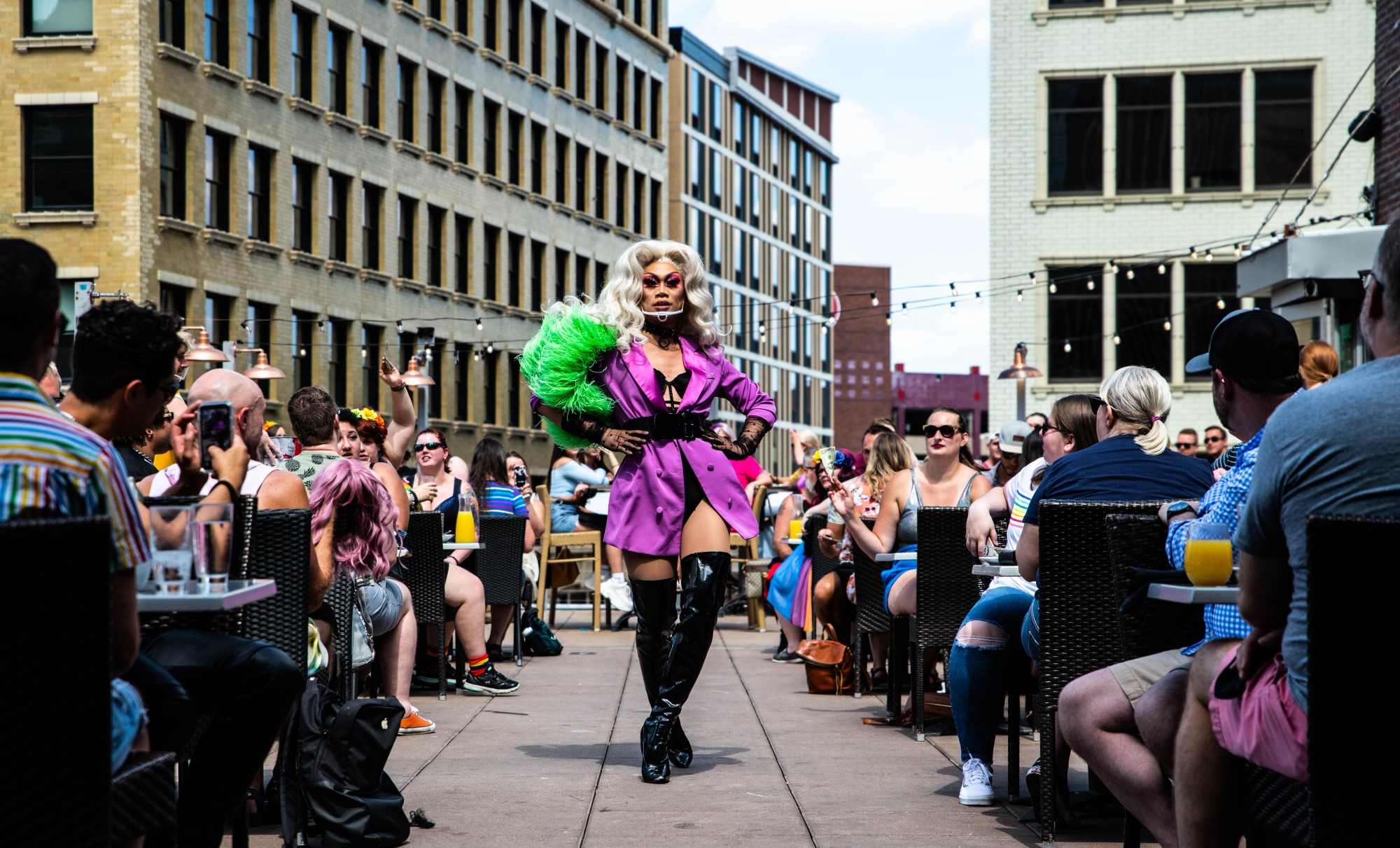 Julia Starr performs at the Pride Drag Brunch at Union Rooftop on Saturday, June 27. With the venue at half-capacity and with face masks required for all patrons, the celebration of Pride continued amidst the COVID-19 pandemic.

The event that celebrates queens of all kinds is back at the Union Restaurant rooftop in Minneapolis. Reopening right in time for Pride weekend, the Union rooftop’s beloved drag brunches, produced by Flip Phone Events, began again on Friday, June 26 with a few socially distanced twists.

After a temporary halt in operations due to COVID-19, the drag brunch now operates at 50% capacity or less, depending on weather, and in open air, unlike the traditionally enclosed outdoor patio. According to Union manager Mark Holman, masks are required as attendees move around the dining space. Tips can be received electronically through Venmo or PayPal, tables are six feet apart and all touch points — elevator buttons, railings, tables, chairs and plates — are sprayed and sanitized after each performance to ensure safety and cleanliness.

Jay Brown, an attendee at the June 27 brunch, complimented Union and Flip Phone’s diligence in enforcing rules and ensuring safety in their space.

“They’ve done a good job of enforcing masks,” said Brown. “They’re doing better than most restaurants and pubs I’ve been to.” Many attendees explained that their apprehensions of gathering were trumped by the need for a sense of normalcy that, during Pride weekend, the drag brunches traditionally supply. When asked if she was worried about possible COVID-19 transmission, patron Brikken Jensen responded that “there’s risks to everything.” Her girlfriend, Clairisa Wagner, mentioned how the Union restaurant was the first all queer-inclusive space they have been to in a while.

And the drag brunch staff pride themselves on providing a welcoming and inclusive space to all attendees. Before the event began attendee Ehren Minkema said that he believed it will raise a couple people’s spirits and be the highlight of the weekend for some.

Sasha Cassadine, Twin Cities drag queen and host of the Union Restaurant drag brunches, finds strength and passion in performing drag. During quarantine, Cassadine said how useless he felt, sitting at home and not using his skills.

“I like what [drag] brings into other people’s life,” Cassadine explained. “It’s a major part of my life in so many ways; it’s very therapeutic to me. It just feels good to the soul to do, and sitting at home in quarantine doing nothing was so hard.”

So when the brunches finally reopened, the atmosphere was lively and full of color — perfect for Pride weekend. Attendees wore rainbow boas, rainbow flower crowns and one staffer, collecting money for the drag queens as they performed, walked around in rainbow platformed Tevas. The soundtrack of the event featured classics from Beyoncé, Whitney Houston, Lady Gaga, Lizzo and more. Each queen performed in costumes that incorporated glitter, sequins and fringe into their dynamic looks. At one point, when drag queen Julia Starr performed “I Have Nothing” by Whitney Houston, attendees got up from their seats to scream the lyrics along with Starr. The rooftop on that Saturday morning was filled with passion, inclusivity and a love for drag.

Flip Phone Events plans to resume regularly scheduled drag brunches at the Union Restaurant as well as at Crave American Kitchen and Sushi Bar right across the street. The next few events Flip Phone has planned include a Lizzo drag brunch on July 4, a Taylor Swift drag brunch on July 11 and many more after that. A portion of revenue from events will be donated to organizations, including the National Black Trans Advocacy Coalition and Black Visions Collective, according to Chad Kampe, owner and founder of Flip Phone Events.

Attendee Nick Pfantz commented on the necessity to celebrate Pride, even during COVID-19. “It’s important to do pride. Like, yeah we don’t have the party, but Pride is more than just the party. It’s about equality, and it’s important to remember that.”