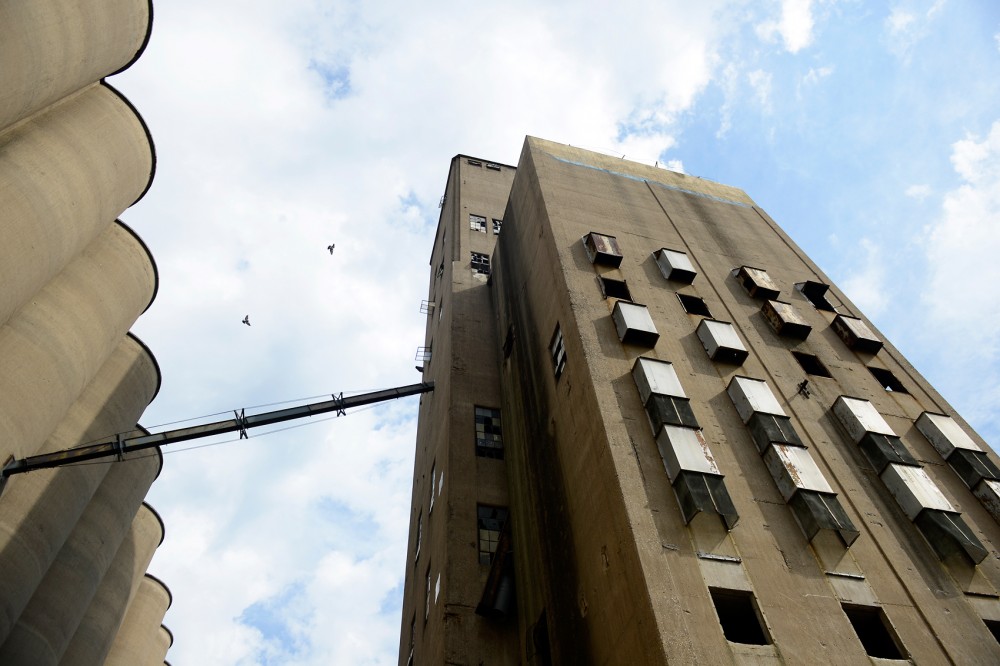 One of the many grain elevators in the Southeast Minneapolis Industrial Area stands in Prospect Park on Monday. The Minneapolis City Council recently passed a bill to charge rescue costs at grain elevator sites.

Sadman Rahman
Urban explorers who may need complicated rescues will now have to pay a hefty fine for the service.
In response to recent deaths and injuries due to falls in restricted spaces — including one in Southeast Como’s abandoned Bunge grain elevator near the University of Minnesota — the Minneapolis City Council approved an ordinance Friday that gives the city the authority to charge rescue fees to trespassers.
Some are skeptical the new rule will discourage urban exploring — a pastime that involves trekking into manufactured, typically abandoned structures.
Property owners and trespassing individuals will have to pay $721 for the first two hours of rescue services and $300 per additional hour, and they can be charged for the repair of damaged rescue equipment.
However, the ordinance will be enforced at the discretion of fire department officials and won’t be imposed in cases where it’s unethical to bill for the rescue, like charging the family of a trespassing individual who died from the accident, Fire Chief John Fruetel said.
“I can’t personally imagine trying to recover a cost from a parent whose child was just hurt or even an individual who’s looking at his hospital bills,” said Ward 2 City Councilman Cam Gordon, who represents the University and surrounding neighborhoods.
Though trespassing in dilapidated buildings like grain elevators has led to deaths in the past — including the fatal fall of University sophomore Emily Roland this summer — urban explorers still visit these sites for scenic views and thrills, Gordon said, adding that he doesn’t think the ordinance will deter them from doing so.
Though life-threatening instances incidents are rare, the elevators still aren’t safe to climb in, Gordon said, adding that the rescue fees will act to cover part of the emergency cost, not as a fine for trespassing.
The fire department’s budget and property taxes usually cover the rescue costs, Gordon said, but charging trespassers to offset the costs could mean increased funding for firefighters’ salaries and replacing damaged equipment.
“We’ve had some rescues where we had to fly in a doctor and lower them in to try to secure a person,” he said, adding that the cost of such extensive procedures exceeds the fees.
Though several grain elevators have been converted into office space, Gordon said, he thinks the unused buildings should be preserved as historic sites and restored to meet safety protocol.
Grain elevator accidents are the most challenging to handle, Fruetel said, because they often occur late at night and in areas where it’s unclear how secure the interior is.
Some people have called for the grain elevators’ demolition, but because the structures are privately owned and would cost more than $100,000 to tear down, Minneapolis Building Official Patrick Higgins said it’s difficult for the city to remove them.
Fences and security guards protect the buildings’ perimeters on some properties, but urban explorers often will gain access by cutting through barriers with power tools, Higgins said.
“Other people then migrate to the site because they know now they can gain entry,” he said.
Despite skepticism, he said he hopes the rescue fees will discourage trespassers from entering the unsafe buildings.
“I’m hoping this acts more as a deterrent than anything else,” Fruetel said.
Delete Image
Align Left
Align Center
Align Right
Align Left
Align Center
Delete Heading