Co-directors of “My Father’s Bookshelf” turned to U experts for accuracy. 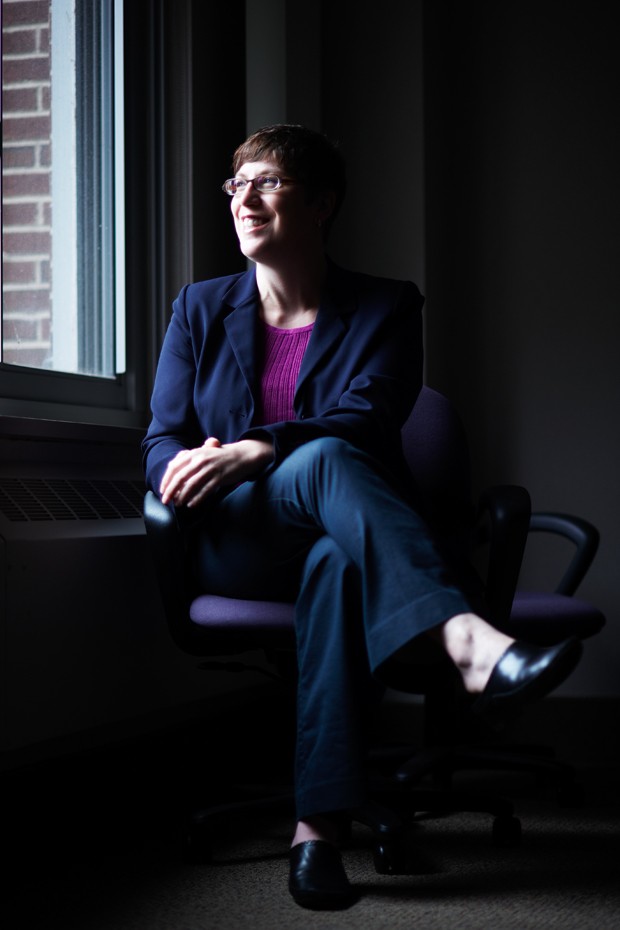 Community Program Specialist Adine Stokes of the University of Minnesota helped the authenticity of the play’s depiction of Alzheimer’s disease.

University of Minnesota social worker Adine Stokes has more than 10 years of experience helping families cope with dementia and memory loss, but providing consultation for a theatrical production was something new for her resume. The directors of âÄúMy FatherâÄôs Bookshelf,âÄù a recent play at the Guthrie Theater , contacted University experts when they decided to write a play about living with AlzheimerâÄôs disease . The play focuses on a man with middle-to-late stages of the disease and goes into detail on how it progresses and impacts the loved ones involved. Stokes, who directs the Wayne Caron Family Caregiving Center at the U niversity, said she helped the directors of the play by drawing from her own experiences since the center opened in 1999. âÄúI was very interested in the production and what they were doing because it seemed like they were really doing something innovative,âÄù Stokes said. âÄúThey were trying to address what itâÄôs like to live with the illness as the person with the disease.âÄù Co-director, Galen Treuer, said the involvement of University experts was critical to the authenticity of the writing. âÄúThey were a tool to educate us, which is essential for the writing process,âÄù Treuer, said. âÄúWe got lucky because these are some very progressive organizations that are really focused on helping the individuals who have the disease.âÄù Treuer and his co-director, Noah Bremer, attended two months of weekly support groups at the Wayne Caron Family Caregiving Center before any rehearsals. The support group included patients with AlzheimerâÄôs as well as their family, friends and caregivers. Stokes said she could tell from seeing the play that they had drawn close connections from the support groups. âÄúWhat I offered up to him is that we could train the actors and train the co-directors by attending the groups that we offer and the psycho-educational sessions so theyâÄôd have an opportunity to sit in and participate in the education and observe, but also sit in the support group settings.âÄù Treuer also contacted Karen Ashe, director of the N. Bud Grossman Center for Memory Research and Care at the University and Kathleen Zahs, director of translational research . Ashe and Zahs were asked to come in to watch rehearsals while the play was still a work in progress. âÄúTheyâÄôd watch us and say, âÄòoh thatâÄôs not quite rightâÄô or, âÄòwow, you have to keep that scene,âÄôâÄù Treuer said. âÄúI took specific parts that are really things that Cathy and Karen told me, the analogies and metaphors they use to describe how AlzheimerâÄôs works.âÄù Zahs said she saw several changes between the first rehearsals and the final product and approved of the outcome. âÄúIt was accurate in they obviously couldnâÄôt get into detailed biology so I think to give some flavor of the research to the general public, it was very good.âÄù Currently there is no prevention for AlzheimerâÄôs, but the unknown served as a tool in the production of the play. Bremer said people with this disease are living in the moment and there is a lot to learn. âÄúAt a certain point you donâÄôt know what is happening in the mind of someone with the disease so we got to have a lot of creative freedom to say that is what we think is happening,âÄù Bremer said in a Guthrie online video about the play. Stokes said she agrees. âÄúWe know enough about the disease to be able to inform people what is actually happening in the brain and also to recognize there are people out there who have in-depth and amazing knowledge about how this disease is impairing the brain,âÄù Stokes said. âÄúBut that we still donâÄôt know a lot and that thatâÄôs okay too.âÄù Stokes said she was pleased that the play brought attention and awareness to the disease, but also that it was done so in a way that created a balance of information and entertainment. âÄúOn an emotional level and a scientific level they were really able to provide a nice synopsis of what is happening and what is going on,âÄù Stokes said. âÄúJust being able to play with some of the terminology and use some humor.âÄù AlzheimerâÄôs disease can last anywhere from five to 20 years, depending on when it is first discovered in the person. âÄúObviously they canâÄôt portray that entire lifetime with the illness so somebody newly diagnosed who is not really experiencing a lot of impairments, it didnâÄôt really accurately affect their experience with the disease,âÄù Stokes said. âÄúBut I donâÄôt think thatâÄôs what they intended to do, thatâÄôs not what they went out to do in the first place.âÄù Treuer said the play would not have been the same without consulting these experts and he was able to see how personal it was to them to find prevention to AlzheimerâÄôs. âÄúTheir involvement was absolutely essential to the play we have on stage, and the authenticity of it,âÄù Treuer said. âÄúI do think that their values are reflected in the way we see the disease.âÄù