Minnesota’s 12-18 regular season record was its worst in a decade, but a win or two in Indianapolis might ease the sting. 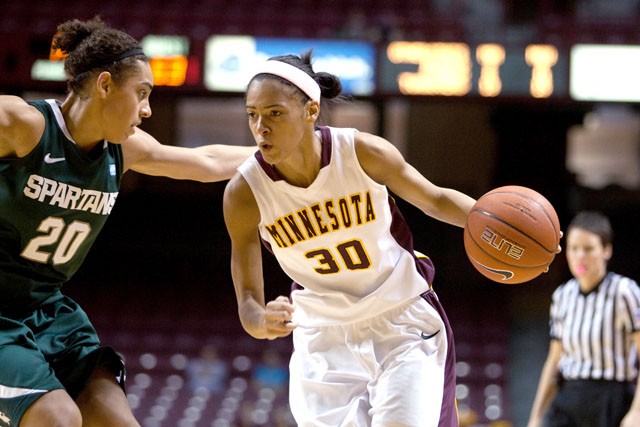 The Gophers womenâÄôs basketball team has one last chance to put a silver lining on one of the programâÄôs worst seasons in a decade.

Big Ten tournament play begins tonight in Indianapolis, and Minnesota will be trying to capture its first postseason win in four years.

Junior Kiara Buford said that in her freshman season, the team had high expectations going into the tournament, but lost as a six-seed. Last year, she attributed the teamâÄôs tournament woes to a downward spiral at the end of the season. This year hasnâÄôt been much easier, but the Gophers have been able to compete with the top teams in the conference, and Buford said they âÄúdonâÄôt have anything to loseâÄù going into their first matchup.

After finishing ninth in the Big Ten with a 4-12 record, Minnesota will be facing No. 8 seed Northwestern in the first round. The teams split their season series, with both clubs winning at home.

âÄúBy the time you get around to playing a team for the third time, you pretty much know everything they do,âÄù senior guard China Antoine said. Though the fact that this might be her last game for the Gophers is in the back of her mind, Antoine said sheâÄôs still taking it one game at a time.

Northwestern (17-12, 6-10 Big Ten) is led by first team All-Big Ten center Amy Jaeschke, who has averaged 23.5 points against the Gophers this year. However, MinnesotaâÄôs focus will not be trying to stop her completely but keeping her teammates from joining her in the scoring.

âÄúAs great of a player as Amy Jaeschke is, thereâÄôs only so much you can do to stop her,âÄù head coach Pam Borton said. âÄúSheâÄôs going to get her points, but we have to do a good job on everyone else.âÄù

BortonâÄôs goal is to keep the 6-foot-5 center between 15 and 20 points. In MinnesotaâÄôs win over Northwestern, Jaeschke tallied 26, but no other Wildcat reached double-digits. In the loss, Jaeschke was held to 21, but sophomore forward Kendall Hackney put in 20 for the Wildcats as their starting frontcourt outscored the GophersâÄô 49-24.

MinnesotaâÄôs Kionna Kellogg, named to the All-Big Ten freshman team this week, is likely to be critical in tonightâÄôs game. In her two games against Northwestern this year, Kellogg has averaged 10 points and 11.5 rebounds.

If the Gophers canâÄôt pull out a win against the Wildcats, theyâÄôll finish the season 12-18, which would be the programâÄôs worst mark since going 8-20 during the 2000-01 season.

After holding a 12-point lead late in their Sunday game against No. 11 Michigan State, Borton is confident that the Gophers can play with any of the teams in the Big Ten. The trick is going to be stopping NorthwesternâÄôs inside game and keeping Jaeschke under wraps.