Minnesota upends Irish to advance to second round 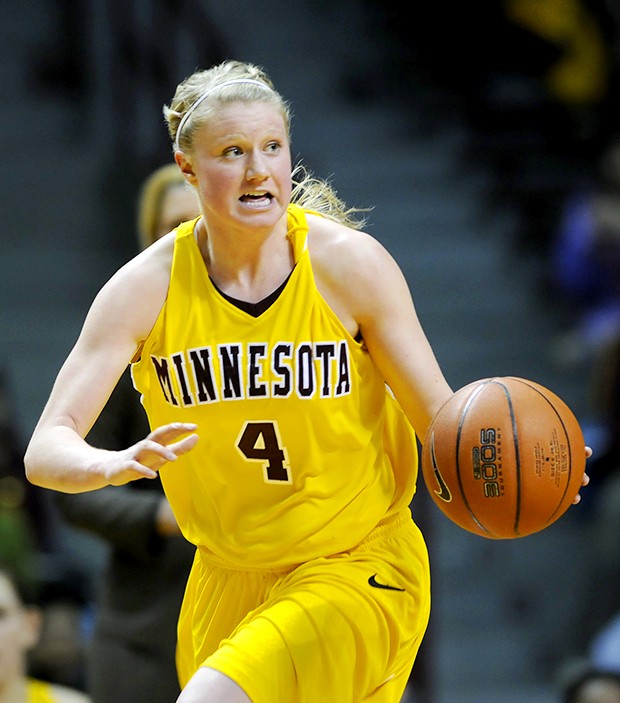 Losing four of its last five games entering NCAA tournament selection time last Monday, the Minnesota womenâÄôs basketball team needed to lean on its key conference road wins to be selected for this yearâÄôs Big Dance. The Gophers were one of the last teams chosen for the tournament, but that was where the help stopped from the tournament selection committee as No. 10 Minnesota was forced to play No. 7 Notre Dame in South Bend, Ind., on Sunday. But the Gophers made the selection committee look like a smart group Sunday as Minnesota stormed out to an early lead with hot shooting, played through late foul trouble and relied on 3-point specialist Katie Ohm to upset the Irish on their home court in a 79-71 win. âÄúGreat players step up this time of year,âÄù Gophers coach Pam Borton said of Ohm. Minnesota (20-11 overall) will take on No. 2 Texas A&M on Tuesday at 6 p.m., as the Gophers advance to the second round for the first time since 2005 âÄî when they went on to make the Sweet 16. The Gophers hit 11 of their first 13 shots and were 62.5 percent shooting from the field in the first half. Freshmen Jackie Voigt was hot early on with nine first half points, hitting an array of mid-range jumpers in the first half including MinnesotaâÄôs first two points of the game. But while Minnesota was racking up the points to take a 42-30 lead at the half, it was also racking up fouls that were costly later in the game. Within the first three minutes of the second half, Voigt and junior point guard Brittany McCoy both picked up their fourth fouls and were forced to sit down. Less than seven minutes later Gophers junior center Zoe Harper, who provided rebounding strength for Minnesota, was nailed with her fourth foul of the game. But Borton chose to keep Harper in the game, and the move paid off as Harper grabbed 13 rebounds to lead Minnesota in out-rebounding the Irish 45-29. With two of its starters out, the Gophers early lead dwindled down to two points as Notre Dame swished in a 3-pointer, awakening the home crowd and bringing the score to 58-56 with nine and a half minutes left in the game. But behind the steady shooting stroke of junior guard Ohm âÄî hitting three 3-pointers in a row in a three-minute span âÄî the Gophers built back its early lead and played through the critical foul trouble. âÄúI could tell the crowd wasnâÄôt in it. It wasnâÄôt until they started to come back a little bit that I started to hear them,âÄù senior guard Emily Fox said. âÄúI think that was a big key for us, to get the momentum back.âÄù Coming into the tournament, Ohm was five 3-pointers behind MinnesotaâÄôs all-time record for threes in a season, and her 15 points from five treys Sunday tied the record with 73 threes this season. âÄúI just go out there and shoot,âÄù Ohm said. âÄúI think thatâÄôs my role on this team.âÄù While both Voigt and McCoy would foul out in the last minutes of the game, OhmâÄôs shooting and the senior leadership of Fox was enough to keep the Gophers afloat. As McCoy sat out most of the second half with foul issues, Fox was forced to play McCoyâÄôs point guard position and the senior flourished in the role with a game-high 23 points. âÄúShe was the dagger. Fox did what we thought she would do,âÄù Notre Dame coach Muffet McGraw said. âÄúBut I thought she [Ohm] was the one who really won the game for them.âÄù