Destiny Pitts had a career-high 16 rebounds to help the Gophers win at Williams Arena Sunday. 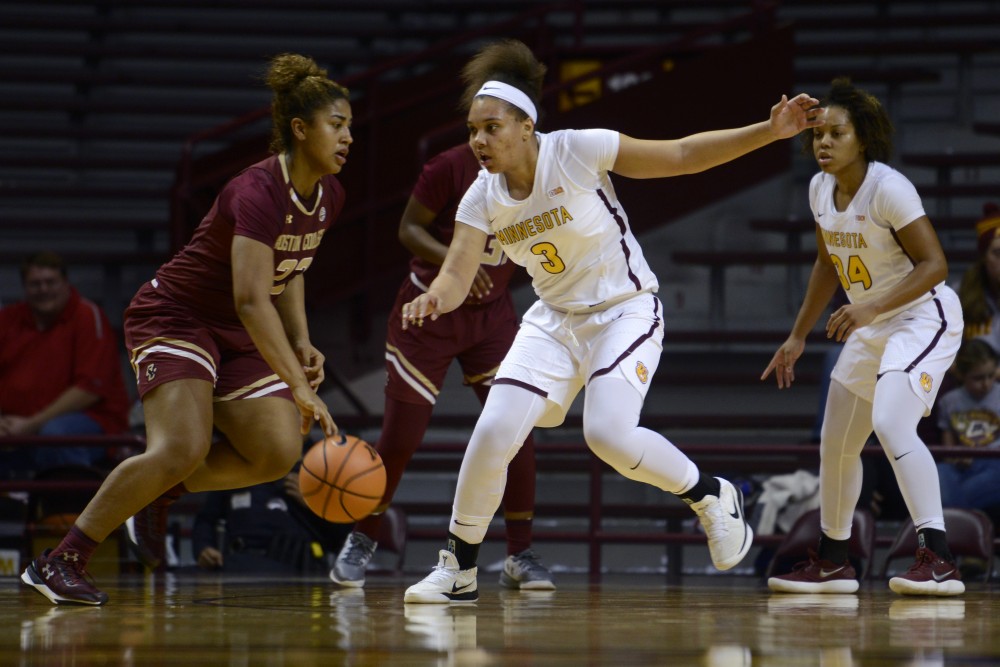 Freshman Destiny Pitts attempts to steal the ball from a Boston College player on Sunday, Nov. 19 at Williams Arena.

The Gophers needed players to step up in their game against Boston College on Sunday.

Destiny Pitts and Kenisha Bell did just that — in the form of career nights at Williams Arena.

The Gophers defeated Boston College 78-68 to move to 4-0 on the season. Bell scored a career-high 31 points, and added 10 rebounds, five rebounds and three steals for good measure, making this her third consecutive double-double game.

Pitts, who’s only a freshman, now averages a double-double for the season after notching 14 points and a career-high 16 rebounds. This was Pitt’s second double-double in a row.

“Anytime we got a chance to be in the gap that helped with defensive coverage, I was there,” Bell said. “Offensively, I just felt it in the first half. We had one of the players that usually scored out for foul trouble, so I felt like I had to help out.”

Though it was close, the Gophers never trailed in the game and Bell played a big factor. She was on the court for 39 minutes. Head coach Marlene Stollings said Bell’s conditioning was the least of her concerns, noting that Bell could go over 60 minutes if there was enough time on the clock for that. Bell shot 11-for-25 from the field on the night, including four-for-eight from behind the arc.

The Gophers out-rebounded Boston College 54-30, and a big reason for that was the freshman Pitts. In only her fourth official collegiate game, Pitts has looked well above her years out on the court.

“Back-to-back double-doubles, leading our team in rebounding, averaging 11, which will go up tonight because she had 16 [rebounds], you don’t see that,” Stollings said. “You don’t see that even across the country or in the nation at a lot of positions for veterans, and we got the freshman doing that, and she’s a guard.”

There’s a reason Pitts has been so aggressive on the boards.

“Offensively, my teammates are able to find me when I’m open and I trust in my shot,” Pitts said. “I try to focus on getting rebounds because I know I can outlet it to our point guard and they’re going to get the break started.”

Carlie Wagner had a bit of a rough night. After getting into early foul trouble, the Second Team Big Ten honoree shot 3-for-14 and finished with nine points. Another noticeable performance included Gadiva Hubbard, who added 10 points. Overall, Minnesota is only 36.6 percent from the field, compared to Boston College’s 42.6 percent. This shows that even when the Gophers struggle with their shots, they can find other ways to get the win, which is something they’ll need come March.

“We have the goal of going to the NCAA tournament, and not just going, but going and advancing,” Stollings said.