From the border, students explore immigration and ‘The Wall’

Students spent 10 days on the Mexican border researching the impact of the border fence. 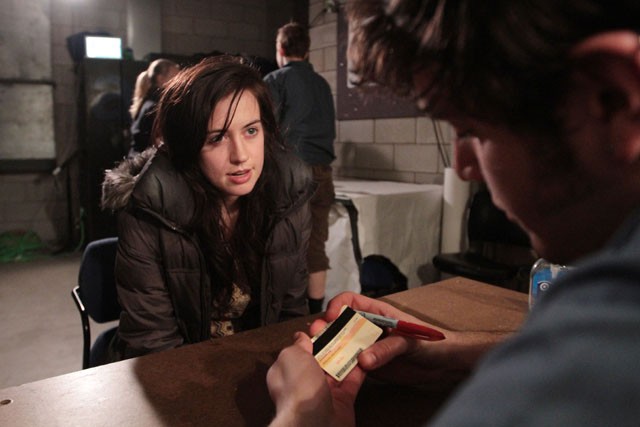 Senior Evy Muench, left, gets interrogated by Matt Fitzgerald before being allowed entrance to see "The Wall" on Monday at the Rarig Center. The interactive play portrays a journey that many immigrants must make from Mexico to the United States.

Brent Grihalva led the cast of âÄúThe WallâÄù on a journey through one of the coldest nights of the Minnesota winter.

Though he was playing the role of a âÄúcoyote,âÄù smuggling his peer actors across the U.S.-Mexico border, it was not a performance âÄî it was research, in 15-below-zero cold.

The simulation was part of the extensive process of exploring the issue of immigration for the play, which will be performed for the second time Tuesday night in Kilburn Arena Theatre in Rarig Center.

The development of the âÄúThe WallâÄù began when three of the cast members received Undergraduate Research Opportunities to travel to the border in Arizona last June.

They were interested in trying to understand the impact of the fence built along the U.S.-Mexico border, Grihalva said.

âÄúWe spent 10 days having conversations with people on all sides of the literal border as well as all sides of border issues,âÄù said Xanthia Walker, a co-director of the play.

Grihalva said though the students intended to spend half of the trip on the Mexican side of the border, the University of Minnesota prohibited them from doing so due to the dangerous travel climate in the area.

Walker, a 2007 graduate of the theatre program, said the idea for the play was sparked five years ago during a conversation with Luverne Seifert, a faculty member of the Department of Theatre Arts and Dance and the other co-director of the play.

âÄúWe started talking about how interesting it was that we were putting up a wall,âÄù she said, âÄúespecially with our history of telling other countries to tear walls down.âÄù

The cast auditioned through a University class called Creative Collaboration, where much of the shared development of the play occurred, said Walker, who moved to Phoenix for graduate school. SheâÄôs in Minnesota this month to direct the play.

Cast member Anna Kunin said that one of the challenges of the creative process for the play was ensuring that they were fairly representing the issue.

In addition to hearing stories from the Arizona trip, the student actors spent a lot of time engaging the Twin Cities community to develop the play, including exchanges with the Mexican consulate in St. Paul, El Colegio Charter School, and other community organizations devoted to Mexican immigration issues, she said.

âÄúWe put effort into having conversations in the community about why creating a piece exploring this issue is important,âÄù she said.

Grihalva agreed that fair representation was the central issue that the cast struggled with.

âÄúWeâÄôre dealing with a cast of mostly white, middle- to upper-class students,âÄù he said. âÄúWe had to figure out how to represent the stories of these Mexican immigrants without being offensive.âÄù

To solve the issue, the play uses allegory and represents the experience through animal characters, Grihalva said.

Grihalva, Kunin and Walker said the play is only a first draft of what they hope to ultimately produce.

âÄúThis is just the beginning,âÄù Kunin said. âÄúIt is not a cut-and-dried event that ends.âÄù

The audience will play a role in âÄúeditingâÄù the play by engaging in the interactive pre- and post-show experiences where they will simulate a port of entry, Grihalva said.

He said they will fill out questionnaires, called âÄútemporary visasâÄù that will facilitate the discussions at the end of the show.

Cast members said they hope the play is able to engage audience members in a more empathetic perspective of the issue.

âÄúI hope people leave wanting to be part of the discussion rather than spectators to government policies,âÄù Walker said. âÄúWe want to portray the human story behind the statistics.

The pre-show experience begins at 6:30 p.m., tonight, and the performance is free and open to all.