UBreak allows bboys and bgirls to stretch their talents through practice, camaraderie and battles like the upcoming Kings of the Midwest tournament. 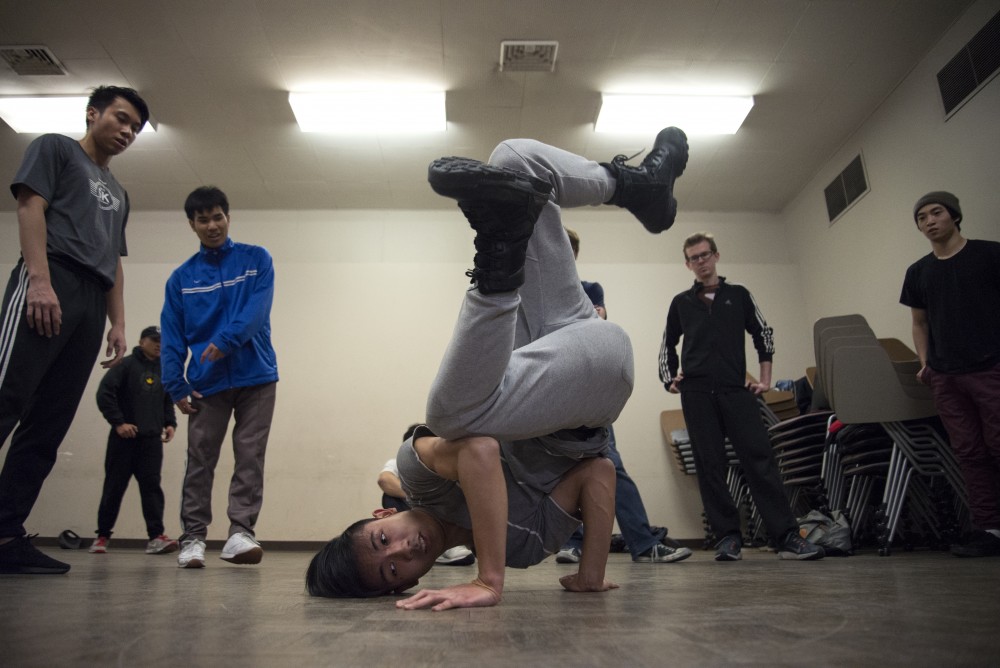 Seth Souvannayoung is cheered on by friends during a dance practice in Peik Gymnasium.

Last Thursday night, the sounds of nearby tap dancers and drum rehearsals were drowned out by hip hop music in the Peik Gymnasium as the University of Minnesota break dance club, UBreak, held practice. UBreak students, otherwise known as bboys and bgirls, in sweatpants and sneakers gathered, stretched and prepared themselves for a long rehearsal of dancing.

Open to all students, UBreak lets students interested in break dancing connect with dancers and polish their skills. The club hosts a weekly practice and open session.

“From what I know and from what I’ve learned, what we dance to is called a break beat … They didn’t start calling it breakdancing until it became mainstream,” Pascual said. “On a funk record, there would be a part where there’s no singing, there’s no nothing and it’s just drums. That’s what people would dance to.”

A key element of break dancing is battling, and UBreak will host their fifth annual Kings of the Midwest battle this Saturday. Even though the event is hosted by a student group, this year’s battle will see dancers from California, Pennsylvania and Japan, thanks to skilled members meeting other bboys and bgirls at other battles across the country.

“We call it ‘Kings of the Midwest’ because we thought that people from the Midwest would come, but now, I guess Japan is in the Midwest,” Pascual said.

A typical battle begins with preliminary rounds, cuting out dancers until a winner is crowned. Each battle has a panel of respected judges, but they do not use a strict point system, instead relying on subjective evaluations of the dances.

“You want to look different in each set. You don’t just want to come out and do the same couple of moves, even if they’re impressive,” said Jack Erhardt, a sophomore studying electrical engineering. “If you do the same thing over and over again, that’s not really bboy style.”

Performances in battles are typically improvised. Preparations for battles like Kings of the Midwest can range from nothing at all to intense physical training, given bboying’s combination of creativity and endurance.

“What we do in the meantime is practice our moves. You can do a move really well and do it consistently … but you practice going from move to move and dancing to music because it’s a dance,” Pascual said. “A lot of this … is really intense physically, so people will do a move, do five push-ups and then do a move again.”

Despite the pressure of a battle, student competitors see the night as a way to push themselves and, if nothing else, release some stress before finals week.

“I’ve never battled before. There was another battle I was supposed to be in, but I chickened out and just watched … [This one] is in the middle of finals for me, so I’m just going to get out there and let out some stress and have some fun,” Erhardt said.

As skilled as some of the dancers in Saturday’s competition might look, many join UBreak with little to no experience at all.

“They taught me everything I know, so all of my growth has been through UBreak. It’s not only been learning moves, but it’s been learning about developing your own style and a little bit about the cognitive aspect of why we do what we do,” Pascual said.

Though many novices join UBreak, skilled dancers from Twin Cities bboy crews join the club when they come to the University.

Leroy Panyathip, a sophomore studying business and marketing education, has been bboying since he was 12 years old. He started teaching others as a UBreak freshman.

“When you teach, you have to break it down … Breaking it down and explaining it to others help me solidify moves and understand the foundations even better,” Panyathip said. “It also helped me understand the type of person I am, the way I teach or the way that I like to present moves to people. It reflected in my breaking — I kind of incorporated more teaching experience into my breaking.”

For well-experienced dancers like Panyathip, UBreak allows them to keep exploring a dance form with endless possibilities.

“Dancing is an art. I could take any move that I want, and put my own little twist on it … No matter how many moves I curate, there will always be a bunch of other moves that I can discover,” Panyathip said. “That’s what keeps me going — the fact that my style and my breaking is always changing and evolving. I feel like it’s hard to please yourself, so I’m going to keep breaking until I’ve mastered it, but I don’t think I ever will.”

What: Kings of the Midwest

Cost: Free for University students with a U card, $5 general admission