A new study showed that more than three quarters of Americans think the cost of prescription drugs are unreasonable. 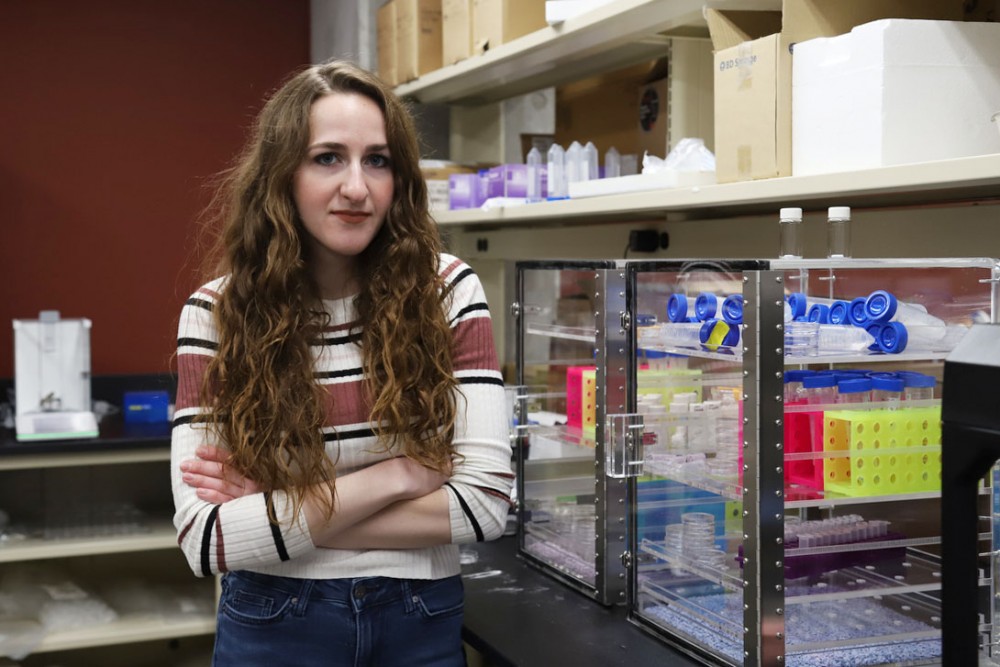 Abby Silbaugh, who had to pay $5,000 out-of-pocket for emergency prescriptions despite her University of Minnesota insurance, poses for a portrait on Monday, March 11 in her workspace. "Between neuroscience class work and independent research, I don't have time to work an additional job to fund expensive prescriptions," she said.

The majority of Americans consider the cost of prescription drugs unreasonable, according to a study released earlier this month.

Many University of Minnesota students and people around the state agree.

Amy Felegy, a journalism student at the University, has been a Type 1 diabetic for 18 years. Because her pancreas does not secrete insulin, Felegy is required to take insulin and utilize blood sugar testing supplies, and costs can be steep.

“I used to be on my parent’s insurance before I went on the student insurance here at the [University], and my insulin cost was about $300 per vial through insurance. A vial usually lasts about a month,” Felegy said.

Felegy prefers a brand of diabetic test strips that aren’t supplied through Boynton Health, so she has to pay out of pocket. Her blood sugar isn’t checked as it should frequently as a result, which negatively impacts her health.

The cost of prescriptions may influence her future decisions, Felegy said.

“Now that I’m graduating, I have no idea what my insurance plans may look like or what an insulin vial may cost after I graduate,” she said. “I’ve got to make sure that I get a job with good insurance to cover all of my medical bills.”

Stuart Williams, a lawyer with Minneapolis firm Henson Efron, serves as a public member on several medical licensing boards. He pointed out the cost of prescription drugs can sometimes be justified.

“I think sometimes the prices are reasonable and sometimes they’re not. I don’t think you can paint with a broad brush. There is a lot of money that goes into innovation and research,” Williams said.

However, Williams said he feels the American healthcare model is “deeply flawed” and focuses too much on profits. According to the online database Statista, the U.S. held more than 47 percent of the global pharmaceutical market in 2018.

“I think [the high cost of prescriptions] has gone too far, and I think we need to do something at the federal level to really address these issues,” Williams said.

Another student, Abby Silbaugh, also thinks that more needs be done. When Silbaugh went to an urgent care clinic and was prescribed two emergency medications totaling over $5,000, she was shocked that a vital medication would cost so much, adding she didn’t think that was the intended goal of those who created it.

According to Rose Roach, executive director of the Minnesota Nurses Association, nurses have directly dealt with the effects of high cost prescription drugs.

“We hear many stories on a regular basis of how [nurses] see patients being sicker now than ever before,” Roach said. “It is directly an impact of the high cost of pharmaceuticals where people either ration drugs or are unable to get the drugs they need to stay healthy and, in some cases, literally survive.”

Roach said some pharmaceutical companies are bought and resold for a profit, driving up the costs of medications.

According to the Government Accountability Office, the amount U.S. citizens have spent on prescriptions has almost doubled since the 1990s. Revenue from pharmaceutical companies reached $775 billion in 2015.

“Supply and demand in healthcare doesn’t work the way it does for houses or cars or computers,” Roach said. “Nurses feel really strongly that people need to get the help they need when they need it and not worry about this cost barrier that is artificially put in place by this system.”

No matter how prescription drug prices are addressed going forward, Felegy hopes that those in government and the pharmaceutical industry will remember the human cost of drug prices.

“Chronic illnesses can be emotionally taxing, and that financial tax that’s added onto it is such a burden,” she said.