The panels are part of the University's goal to eliminate its net carbon emissions by 2050. 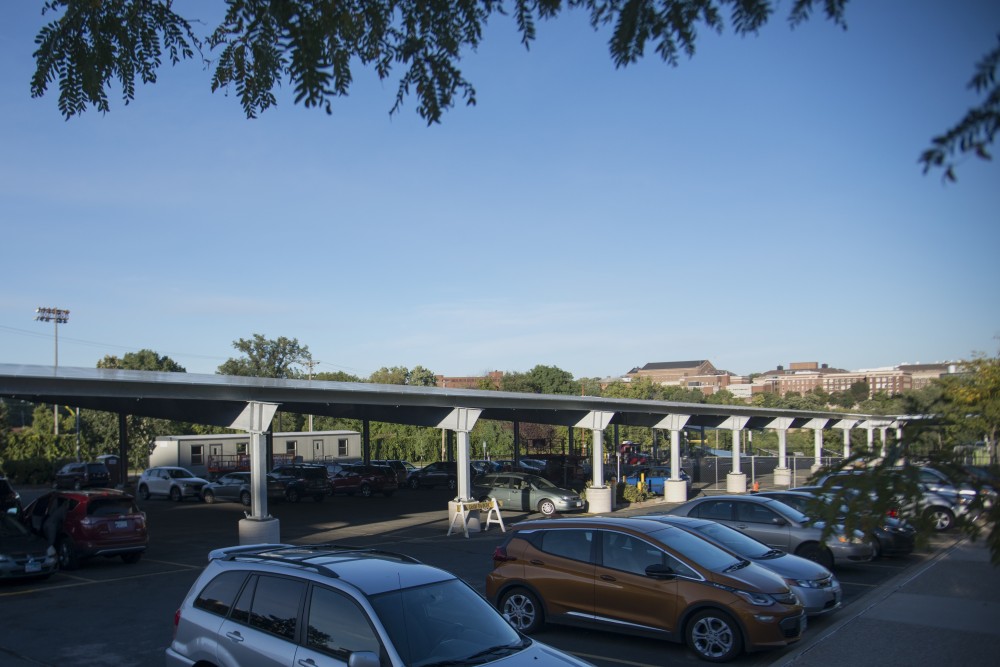 New solar panels shade the parking lot outside Humphrey School of Public Affairs on Wednesday, Sept. 26. The solar panels are part of a University effort to eliminate net carbon emissions by 2050.

The University of Minnesota is steadily increasing its investment in onsite renewable energy through the addition massive solar panels to nine different on-campus sites.

Discussions about implementing onsite solar panels started in 2015, and concrete plans were solidified in November 2016.

“Until recently, solar had not been cost effective for the campus, which is why we hadn’t implemented it except a few demonstration projects at a smaller scale,” said Shane Stennes, sustainability director for the University.

The sites span the East Bank, West Bank and St. Paul campuses. The only complete site is located in the field behind Andersen Library. The University is currently building solar panels on the roofs of the Center for Excellence in the Athletes Village and Continuing Education building and the parking lot of Mondale Hall. Five more sites will begin construction in the coming months around campus.

In addition to the new onsite solar panels, the University also purchased more than 20 megawatts of community solar power from outside sources and has a contract with Xcel Energy that ensures 100 percent of the energy purchased from the company is renewable, Stennes said.

“This [project] is part of a bigger commitment on behalf of the University to purchase renewable sources of energy,” Stennes said.

According to the Environmental Protection Agency’s Green Power Equivalency Calculator, the electricity generated from the nine locations will produce enough energy annually to power 224 homes.

“Between these three initiatives, 20 percent of our energy at the U will be renewable,” Stennes said.

Lori Vitaioli, a University student, said she believes the investment in solar panels is a step in the right direction.

“It’s really cool that the U is taking initiative in moving towards renewable energy sources,” Vitaioli said.

Many departments across campus collaborated on the onsite solar panel project, including Energy Management, University Finance and the Office of the General Counsel, according to Stennes.

Students at the University played a role in bringing solar energy to campus. Ellen Anderson, executive director of the Energy Transition Lab, led the SUN Delegation Team, a group of undergraduate and graduate students who helped evaluate potential sites for solar energy on campus.

“We got the students together and we formed strategies … to do solar site assessments,” Anderson said.

Sites were evaluated based on space availability, other potential future uses for the space and how easy it would be to connect to the University’s electrical grid.

Anderson is confident the University will continue to bolster sustainable energy practices.

“Every year it gets more cost effective,” she said.