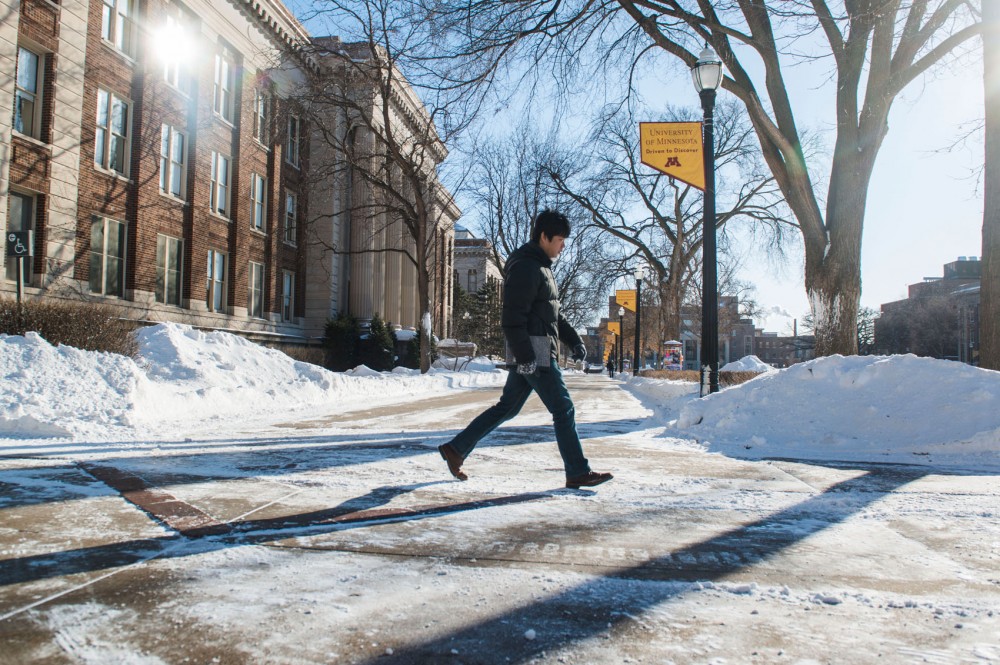 A lone student treks across the pedestrian mall in subzero temperatures while school was closed Jan. 27.

A national research program initiated by a University of Minnesota dean in the 1960s would be eliminated if President Donald Trump’s budget proposal is passed by Congress this fall.

Despite the uncertainty, Sea Grant directors across the country are optimistic about the program’s future.

Sea Grant was the brainchild of University Dean of Technology Athelstan Spilhaus. He presented the idea in the early 1960s. After the idea gained support in Congress, President Lyndon Johnson signed it into law in 1966.

Sea Grant and other programs run by the National Oceanic and Atmospheric Administration “primarily benefit industry and State and local stakeholders. These programs are a lower priority than core functions maintained in the Budget such as surveys, charting and fisheries management,” according to the budget proposal.

“It’s pretty hard to actually make that happen given the kind of support we get from voters,” he said.

State governments must give $1 for every $2 the federal government contributes to Sea Grant, said director John Downing. Minnesota Sea Grant — which focuses on the state’s inland waters and Lake Superior — receives about $1 million in federal funds each year.

“We would not get much work done if we lose that. In fact, that is the heart of our funding stream,” he said, adding that he’s not sure if the state would still contribute money.

The Duluth-based Minnesota Sea Grant staff works on issues across the state, including the health of the Duluth Seaway Port, slowing the spread of invasive species in state waters and working with the tourism industry, Downing said.

Despite the potential cuts, Downing said, the Minnesota Sea Grant is still encouraging applications for $750,000 in annual grants, which are awarded to researchers and graduate students at colleges and universities statewide.

“It would be a great pity if we end up with the money and don’t have people to award those grants to,” Downing said.

Additionally, Sea Grant is encouraging people to ask their lawmakers to support the program, he said.

“I [don’t] want people to lose heart, and we’re working very hard with Congress to find a way to fund these good things that have helped people. I’m hopeful that we’ll be able to offer the same level of research support that we’ve done in the past,” Downing said.

The Lake Champlain program receives about $500,000 from the federal government each year. Without those funds, it would have to shut down, Bowden said.

“It’s worrisome, but we understand the process and are trying to move forward in a proactive sort of way,” he said.

The Michigan Sea Grant program, which receives about $1.8 million in federal funding, would have to lay off 23 staff members. In addition, $500,000 in grants and economic planning for coastal communities would be lost, Diana said.

Program directors say the federal funding has a magnifier effect. In Minnesota, Sea Grant contributes about $10 million to the state economy every year while costing the federal government $1 million, Downing said.

“Why on earth would you kill a program like that? It just makes no sense to me,” Eckman said.