Hadash falls in second round

The men’s tennis player lost in three sets at the NCAA tournament. 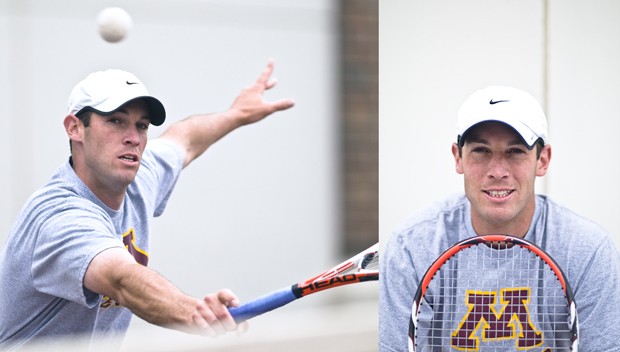 After upsetting the 10th-ranked player in the nation Tuesday , Gophers tennis player Ishay Hadash lost in the second round of the national championship singles tournament Wednesday morning in College Station, Texas. Hadash, a freshman from Lapid, Israel, was defeated 6-2, 4-6, 6-3 by PepperdineâÄôs Omar Altmann. Despite receiving less than a dayâÄôs notice that he was added to the championshipâÄôs field of 64, Hadash won his first match 6-3, 7-6, defeating Cory Parr of Wake Forest. Hadash had already defeated Parr on Feb. 20, but he said he treated it as a new match. The first round victory helped HadashâÄôs confidence, but head coach Geoff Young said he never thought Hadash played his best during the second-round match. âÄúI donâÄôt think he really ever settled down and was able to swing freely,âÄù Young said. âÄúI think he was tentative and hesitant and didnâÄôt trust his strokes.âÄù Hadash won the second set, but Young said he never thought Hadash found a rhythm. Hadash said AtlmannâÄôs aggressive style caught him off guard and had problems adjusting. Atlmann often played close to the net and put pressure on Hadash, he said. âÄúI couldnâÄôt get a read on him from the beginning and he put a lot of pressure all the time,âÄù Hadash said. âÄúWhenever you have a lot of pressure itâÄôs tough to perform.âÄù Advancing in the tournament was a testament to the coaching staff, Hadash said, and he wishes he couldâÄôve advanced further to show how much he has grown since joining the team this year. âÄúI wish I couldâÄôve won one more because itâÄôs a fun way to say thank you to the coaches,âÄù he said. Hadash is the first Gophers player to reach the national tournament since 2006. Although Hadash is only a freshman, he is no longer eligible because of his playing in Israel. Hadash said he will continue to try to help the team any way he can but does not want to be a coach. Before moving to the U.S. Hadash played professionally while serving his time in the Israeli Defense Force. He now intends to major in economics and hang up the rackets.

Team loses in second round
The menâÄôs tennis team had a similar result to Hadash in its quest for a national championship. In the first round, they swept New Mexico 4-0 without dropping a set. But the Gophers were on the wrong end of a similar match in the second round. The team was swept by eventual champion USC in Los Angeles. Young said it was unfortunate that they drew the champs. âÄúThey were playing very well,âÄù he said. âÄúI think we were playing pretty well that weekend, but thatâÄôs the way the draw went.âÄù The win marked the first postseason victory since defeating LSU in 2006. The team was looking for its first trip to the round of 16 since 2000 but fell short. All in all, 2009 was a success for the team, finishing with a 19-8 overall record and making a huge turnaround from 2008, when the Gophers finished 7-17. Hadash and sophomore Tobias Wernet were both honored as a part of the all-Big Ten squad.