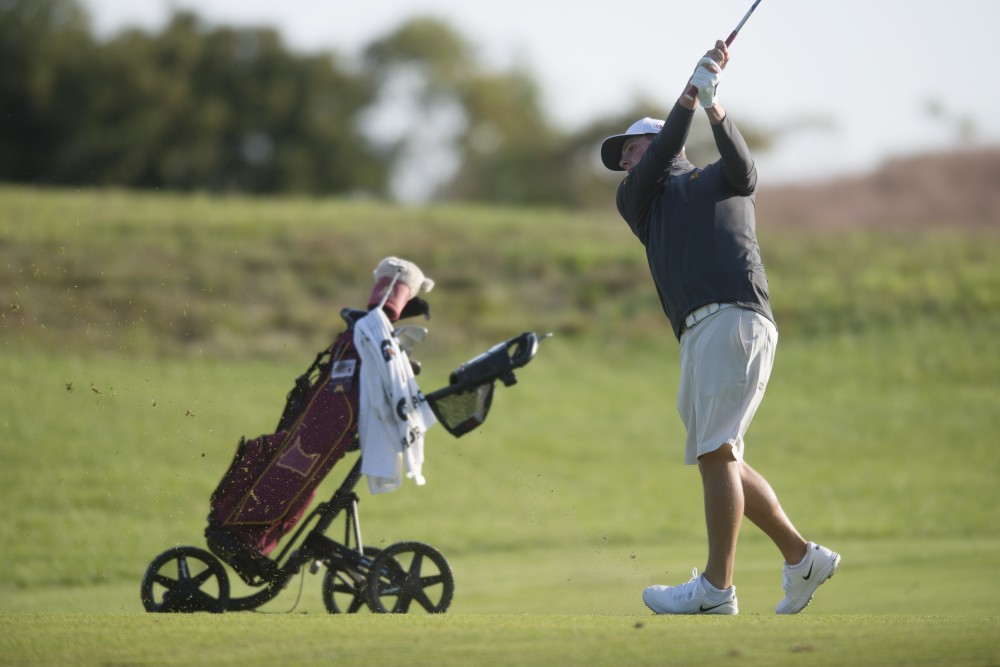 The men’s golf team features young talent coming into the 2018-2019 season. It didn’t take them long to show their potential.

They opened their season facing a tough assignment with the Gopher Invitational at Windsong Golf Course in Independence, Minnesota on Sunday.  The Gophers, who hosted the tournament, were paired with No. 3 Oklahoma and No. 10 Texas.  After three rounds, Minnesota looked like they belonged.

“We gained a lot of experience this week,” said associate head coach Justin Smith, “After one tournament, we couldn’t be more excited about where we are.”

Minnesota ended the tournament tied for fifth with a twelve-over-par finish.  The team’s best round, one-under-par in the third round, helped Minnesota climb four spots on the leader board on the tournament’s final day.  Sophomore Evan Long and freshman Lincoln Johnson led the way for the Gophers, each finishing with a one-over total, good for 11th place among individuals.

“I could tell that there was something different with the attitudes we all had,”  Long said. “We all had really solid rounds of golf today.  I think we all can say we’re pretty pleased with how we did.”

Johnson, a Chaska, Minnesota native, lived up to expectations in his inaugural collegiate tournament.

“He’s a very confident kid, he’s ready for this stage,” Smith said of Johnson. “It’s going to be exciting to see him keep growing.”

Oklahoma won the tournament with a combined five-under-par.  The top finishing individuals were the Sooners’ Blaine Hale and Arkansas’ Wiliam Buhl, who both finished at seven-under-par.

Smith praised the University’s director of men’s golf, John Carlson, for putting together a competitive tournament that gave the young Gophers experience against NCAA’s best.

“It gives confidence to our young players and also our veterans,” Carlson said. “We have many of the skills that these top players possess from these top ranked teams.”

On the other side of the metro, the women opened their season with the Minnesota Invitational in Woodbury. Their campaign didn’t get off to the start they’d hoped, finishing with a 908.  Minnesota finished 14th in the field of 15 teams.

Nevertheless, Grace Kellar emerged as a bright spot for the Gophers. Kellar put together a tournament to remember, including a second-round 68, which tied for the best total of the round.

She ended up with a two-under-par, good for a share of third place. Playing in her home state made the tournament even more memorable.

“My mom was able to come out, which made it really, really special for me,” Kellar said. “There were a lot of people following our team. It was fun doing it [in Minnesota].”

The new season couldn’t have gotten off to a much better start for the sophomore.  Head coach Michele Redman spoke highly of Kellar, crediting her work ethic leading up to the year’s first tournament.

“She’s just continuing to grow as a player,” Redman said. “She worked really hard on her game this summer. She’s always been a great player.”

San Jose State came away from the tournament with a decisive victory, finishing with an 860, a dozen strokes better than second-place Virginia Tech. The Spartans prevailed in large part thanks to Natasha Andrea Oon, who completed her three rounds nine-under-par overall, the best individual score of the tournament.

The young Gophers will have a challenging turn-around, as they will take part in the Annika Intercollegiate next week in Lake Elmo, MN. Redman said the team will need to improve quickly, as they prepare to match-up with some of the strongest teams in college golf.

“I think they know what we need to do,” Redman said. “They understand that they’ve got to put the work in. We’re a young team, we’ll get better.”