Minnesota won in a penalty shootout 5-4 after a 0-0 draw. 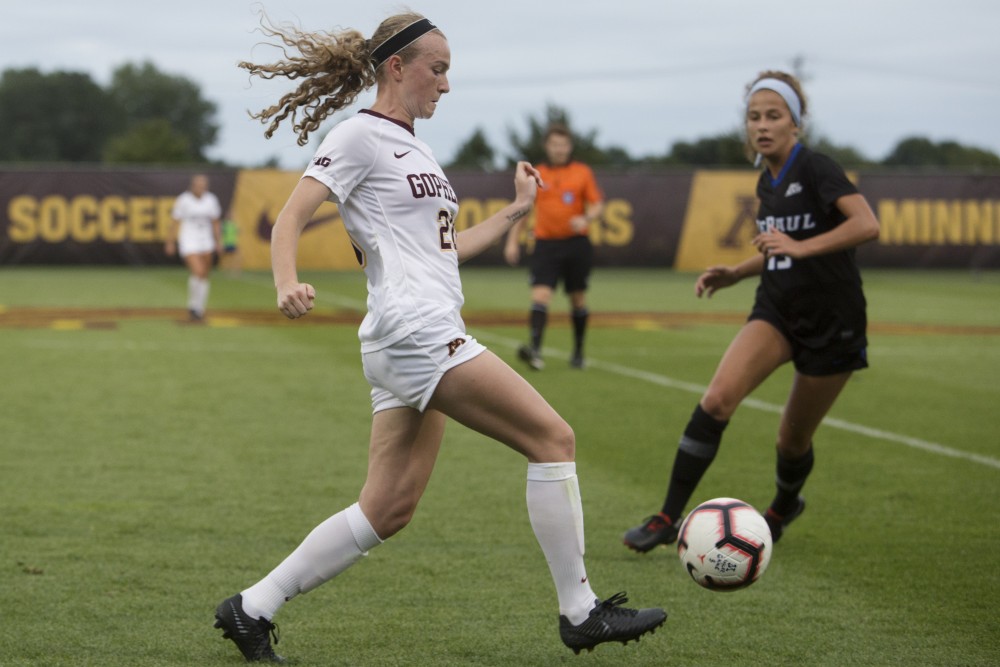 April Bockin dribbles down the field during the game against DePaul on Thursday, Aug. 30 at Elizabeth Lyle Robbie Stadium.

Some didn’t expect the Gophers to beat the Nittany Lions in the Big Ten championship. Minnesota proved the critics wrong.

Minnesota (11-8-2) defeated No. 15 Penn State (15-5-1) 5-4 on penalty kicks after a 0-0 draw on Sunday at Grand Park in Westfield, Indiana. The Gophers, who were seeded seventh in the Big Ten tournament, clinched their second Big Ten championship in three seasons.

“It was special to be able to take that No. 1 seed all the way through and win the whole thing,” Golan said. “This one, going in as the seventh seed, there’s not as much pressure … because nobody outside your own locker room expects you to be able to do it at the end of the day.”

Forward Makenzie Langdok put Minnesota ahead 5-4 in the seventh round of the shootout. Goalkeeper Maddie Nielsen clinched the Big Ten championship for the Gophers when she denied Nittany Lions midfielder Frankie Tagliaferri moments after Langdok scored.

Langdok said she sprinted to Nielsen after the stop.

“That was an unbelievable save,” Langdok said. “She did a great job in the shootout. She guessed right every time. All we have to do is put our PKs in and leave it up to her because we know she’ll get the rest of it done.”

Nielsen jumped in celebration after making the shootout-winning save. Her teammates ran out to her as it became official: Minnesota had won the Big Ten championship.

“I was trying to stand up tall so they wouldn’t try to shove me over to the ground and do a dogpile,” Nielsen said. “Seeing all my teammates make their PKs and ending [the shootout] with a save made it all the better.”

After neither team could score in regulation and overtime, the Big Ten championship match went to penalties for the first time in history. Nielsen’s save clinched Minnesota’s third Big Ten title since the program began in 1993.

Nielsen said she credits Minnesota’s defense for her recent success.

The Gophers automatically qualify for the NCAA tournament as Big Ten champions. Minnesota will learn its first-round opponent when the NCAA Tournament Selection Show airs online at NCAA.com on Monday at 3:30 p.m.

Golan said she is proud of Minnesota for not letting doubters define its tournament.

“I am super proud of this team for not caring what anybody else thinks,” Golan said. “To be able to lift that trophy at the end was great for them.”