Senior swimmer CJ Smith is an All-American for the Gophers. 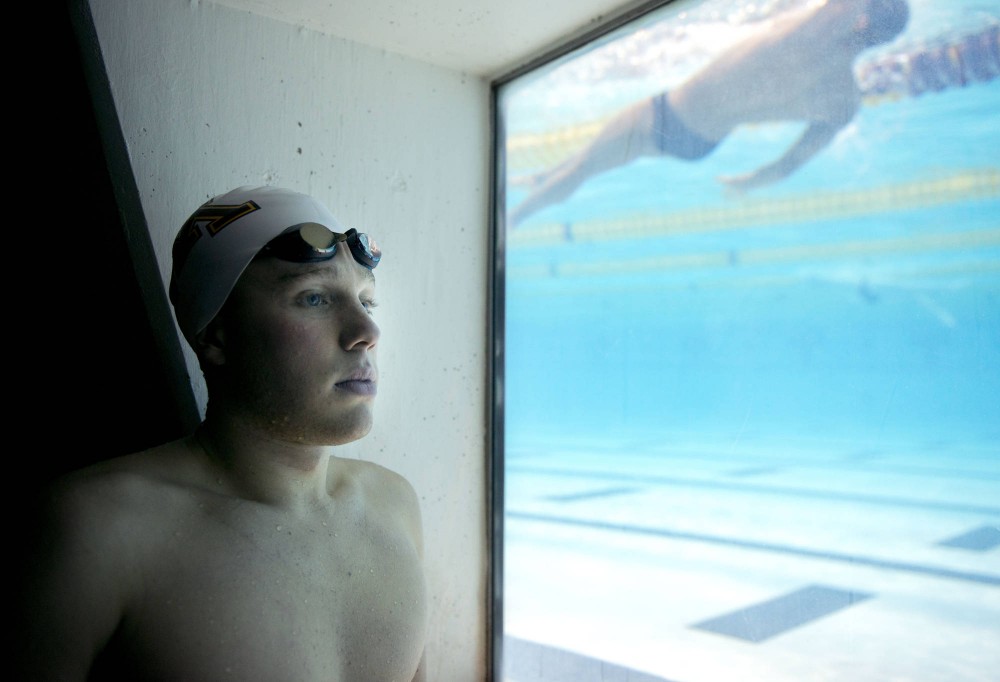 CJ Smith will compete in his fourth consecutive NCAA championships later this month.

It takes a lot of commitment to become an All-American at the Division I level.

For senior CJ Smith, his desire to be the best started before he even stepped on campus.

As a high school swimmer, Smith didn’t miss a single practice in all four years of his career.

“I’ve never seen somebody who has been so dedicated and works hard on his own. We never, ever, ever had to tell him to go to practice. Not once in his entire life,” said Kaci Smith, CJ’s mother.

Smith’s commitment to swimming has taken him to his fourth-consecutive NCAA championships, where he’ll compete later this month.

“He just continues to do for the Gophers what he [has done] for the last three years, finishing up his fourth year,” head coach Kelly Kremer said. “There is no question about it that he is dependable. He’s a heck of a swimmer, and I know he’ll finish his career strong in the NCAAs.”

Smith completed his final Big Ten championships last month, and he has one more collegiate meet that could add on to his legacy here at Minnesota.

Beyond that, Smith has already made plans — law school.

Recently, Smith has spent summers working at the State Fair in the entertainment department.

“I got to meet some of the agents for musicians,” Smith said. “I know that I want to be in the field of law, and I have set my sights on it; and that is one of my goals.”

His acquaintance with the agents sparked his interest in representing athletes in the future.

“Being an agent is a really interesting line of work,” Smith said. “It’s one of those things where the effort you put in is what you are going to get out. You chase people, and you want to represent them. And if you show them that you have a real passion for it, then they are going to let you represent them as an agent.”

“We learned to never doubt his ability or his desire to want to pursue something,” Chris Smith said. “He’s always been so focused on things that if [being a sports agent] is what he wants to do, we know that he will be successful at it.”

Smith said after he graduates, he will use the following year to study for the Law School Admission Test or LSAT.

“If that was an option after a lot of years of practicing law, I think that would be pretty interesting thing to be involved with,” Smith said. “It is not an easy path to take, especially in the U.S. It takes a lot of money, and it takes a lot of connections to get involved with at a high level. But I think that it would be great to have an influence on not just on my friends but the nation as a whole.”

Kaci Smith said she believes her son would be a great politician.

“I could definitely see him go down that path,” Smith’s mother said. “He’s very composed, and he also does his homework, too. What I mean by that is he doesn’t just go give an opinion on something unless he has checked out what that opinion really means. I think that’s really important for a politician.”

Besides taking a year off to prep for the LSAT, Smith will be training to qualify for the 2016 Summer Olympics.

He said the trial is a little bit away, but it comes up soon, and he wants to be ready for it.

“Right now, even if I am a few seconds behind [a qualifying time], obviously I don’t want to cut myself short. The big goal for me has always been to represent the United States. I don’t want to quit swimming knowing that I feel like I have the potential to reach that,” Smith said.

Grant Smith said if his brother does realize his goal of representing the United States in the Olympics, he wouldn’t know how to describe his feelings exactly. In high school, he said his brother wasn’t in contention to qualify for the Illinois state meet, but he left as one of the best 500-yard freestylers.

“I think there would be so much joy knowing that his work really did pay off,” Grant Smith said. “Even if he doesn’t make the Olympics, he should be proud of what he has accomplished in the sport of swimming.”

But before the Olympic trials, Smith has another important meet to focus on. He’ll have about three weeks off before the NCAA championships.

However, no matter how he performs or what the legacy that Smith may leave behind at Minnesota, his parents will always be proud of him.

“We are extremely thankful for the opportunity that he has been given,” said Smith’s father, Chris. “It means a lot to us that he is very devoted to the program. He has probably got as much out of it as he has given back. I think he wants to leave the program better than [when] he came there, and I hope that’s what happens.”