The changes come as University faculty disagree over a current joint administrative position. 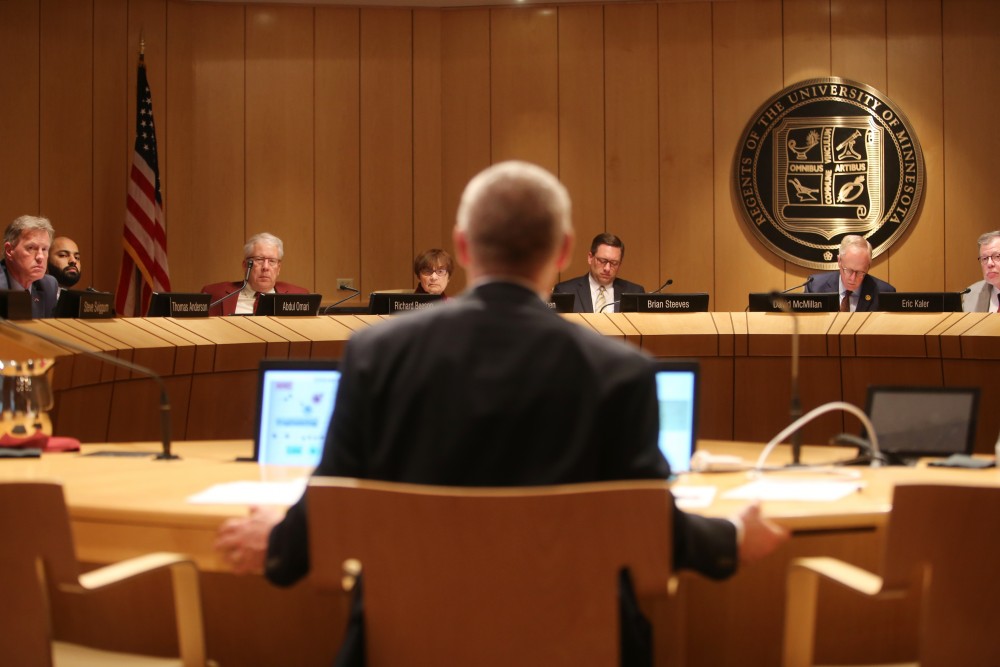 The Board of Regents listen to Medical School Dean Jakub Tolar present during a regents meeting on Friday, May 11, 2018 at McNamara Alumni Center.

In a statement sent to University faculty and administration on Friday, Kaler announced the creation of new administrative positions, realignment of research centers and the restructure of operations within the Academic Health Center. The changes follow an ongoing discussion regarding the structure of the center, including the dual administrative role of the vice president of the AHC and dean of the Medical School.

The new structure is intended to place an emphasis on the University’s clinical work in light of its recent renewal of its partnership with Fairview Health Services and encourage collaboration across the health sciences departments, according to the statement.

“My vision is that we be unparalleled in our clinical excellence, scientific discoveries and interprofessional education in the health sciences,” Kaler said of the restructure in his announcement.

The restructure will also create a new administrative position, the vice provost for academic health sciences, which is aimed at centralizing academic work and enhancing interprofessional education within the University, according to the announcement.

These changes come following discussions between the Academic Health Center’s Faculty Consultative Committee and Office of the President regarding the structure of the AHC.

One of many topics discussed is the ability of Tolar to hold the role of both vice president of health sciences and dean of the Medical School. The AHC FCC, which is authorized to speak on behalf of AHC faculty, released a position statement earlier this month reaffirming its position against one person being able to effectively lead the Academic Health Center and Medical School, citing a potential conflict of interest among other concerns.

The AHC FCC statement came following a survey conducted by the AHC FCC which found 80 percent of respondents answered that a singular position would not be effective in meeting University goals. The survey was a result of President Kaler’s request for faculty input on the AHC structure in the fall of 2017.

“We feel it’s our obligation to present to the faculty we represent this position and to reiterate to the president that we are holding this position,” said AHC FCC member Kathleen Krichbaum prior to Kaler’s announcement.

The AHC FCC’s position statement said the University has demonstrated over time that the administrative structure has not worked to re-establish the Medical School to its former status as a national leader.

President Kaler told the Minnesota Daily prior to the release of the restructure that he continues to believe a single person can lead all health science activities and serve as the dean of the medical school. The AHC FCC and Office of the President met in May and June to discuss the AHC structure.

Tolar’s new role as vice president of clinical affairs is pending approval from the Board of Regents at their July 11 meeting.