While some applaud her ability to reach moderates, others think she is too moderate and won't go far in the presidential race. 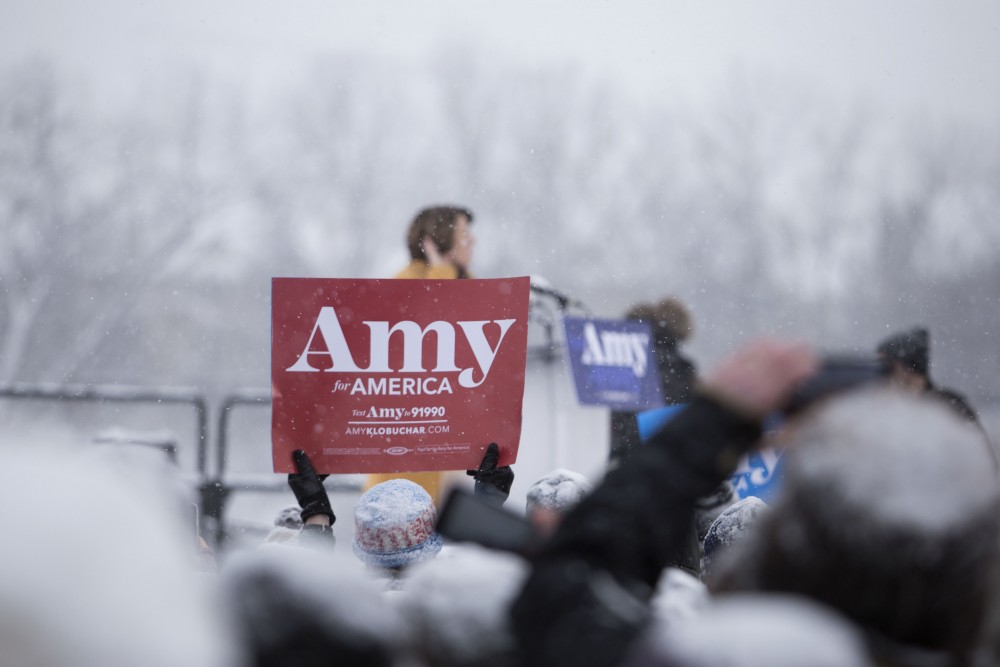 The crowd cheers as Amy Klobuchar takes the stage at her presidential bid announcement on Feb. 10 at Boom Island Park in Minneapolis.

The announcement of Sen. Klobuchar’s, D-Minn., bid for the democratic presidential nominee earlier this month has excited students at the University of Minnesota. They are curious if she has what it takes to win the Democratic nomination, let alone the United States presidency.

In the weeks following her announcement, University students on the left have wondered whether her centrism will help or hurt her chances and whether her staff treatment could leave her out of the race completely.

Katie Swartzer, a second-year student studying strategic communication and political science, attended Klobuchar’s announcement speech on Feb. 10 at Boom Island Park. Though Swartzer said she doesn’t know if she’ll be supporting Klobuchar in the primaries, she admits Klobuchar has the “hometown advantage.”

“She’s got that ‘Minnesota Nice’ thing going for her,” Swartzer said.

“I’ve always admired Amy Klobuchar because she gets a lot of work done. She’s working across party lines more than anyone else,” Hackerson said. “I think especially the people from Minnesota are getting excited.”

Hackerson said the best chance for a woman to win the Democratic nomination or even presidency would be to have someone more moderate. Not everyone agrees with Hackerson, however.

University political science student Drew Torrance said he thinks Klobuchar’s moderate stances might be a detriment to her campaign.

“She’s given us the same kind of watered down Democratic talking points that they’ve been giving us for years,” Torrance said. “And college costs still go up, college debt still goes up. She wants this middle-of-the-road solution to everything and that just doesn’t get much accomplished. We need actual progressive reform.”

He added that progressives may be able to do better in smaller, rural communities than a moderate.

An additional hindrance to Klobuchar’s chances may be the allegations of mistreatment among her staff. A New York Times article claimed incidents of verbal assault and cruelty.

University alumna Deanna Rey worked for Klobuchar from September 2015 to January 2016. Working in the Minneapolis office, she said she didn’t get much firsthand experience with Klobuchar, but that the Senator held a strict standard of professionalism.

“I’ve never seen anything done by Klobuchar that was harmful or hurtful to her staff,” Rey said, though she did recall moments when employees would clear the office of anything deemed unprofessional before a visit from Klobuchar.

Klobuchar has a 36 percent staff turnover rate, the highest in the Senate, according to a Politico analysis.

Swartzer said she hoped the allegations weren’t all true, saying “it’s okay to demand excellence without being hurtful.”

Thinking back on the snowy day when Klobuchar first announced her candidacy, Swartzer said what she remembered was a sense of unity – one she hopes will resonate with people across the U.S.

“Maybe I’m just biased because I am from Minnesota, but there were just so many people there, and I think a lot of people find inspiration and see themselves in her because she’s got a very relatable story,” Swartzer said.