The cost of college, exposed

Students who strip to pay for school say the pros outweigh the cons. 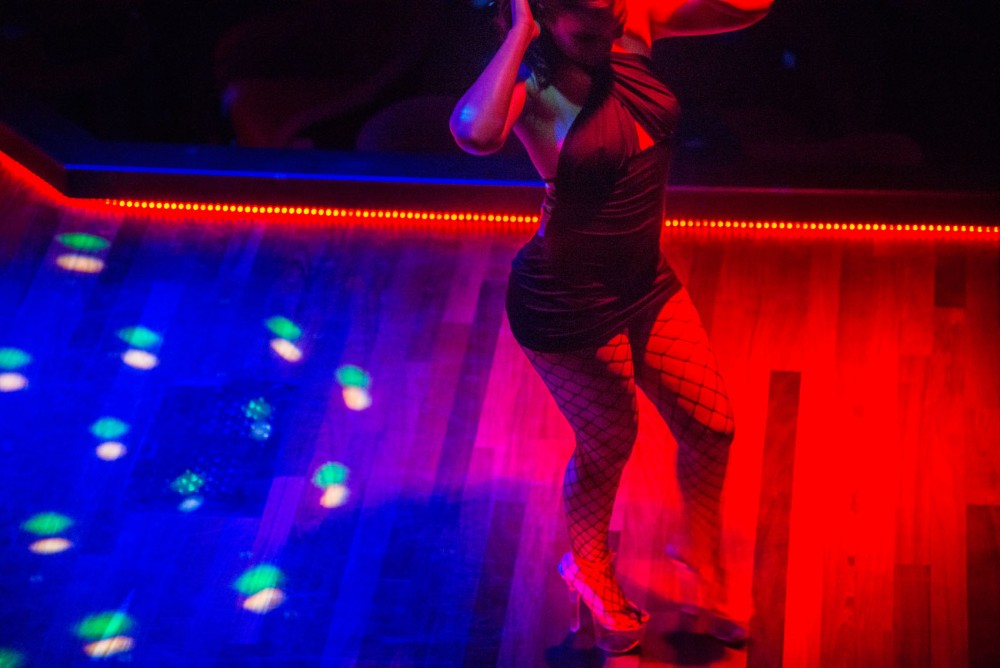 An adult entertainer dances onstage Tuesday night at The Seville, a club and cabaret in downtown Minneapolis.

Krista has been entertaining at The Seville, an adult entertainment club, for almost four years. In May, she will graduate from Concordia University, a four-year private school with a $20,000 annual sticker price.

When guests ask her if she’s using her stripping money to pay for college, she said, her answer is sometimes met with a nudge, a wink and heavy-handed sarcasm.

“Most people think that dancers are just doing dirty things, making money and buying drugs,” she said. “But we’re supporting families, pursuing our own dreams and trying to better ourselves.”

Michael Gabrysiak, DÃ©jÃ  Vu Showgirls general manager, estimated that 80 percent of the club’s entertainers are students, whether at a trade school or a four-year college or university.

“The cost of college these days is just astronomical,” he said. “They can make enough money dancing three nights a week and graduate without any
debt.”

The adult entertainment industry, with its high annual salary and schedule flexibility, is enticing to students who face overwhelming loans and have limited time to hold down a job. Dancers say the work can be challenging but being able to attend school while earning enough to live makes it worthwhile.

“This is my only option. I wouldn’t be able to put myself through the college that I’m in,” Krista said. “I would have to go to a cheaper, two-year program.”

Many dancers pay their way through college, and some find it hard after graduation to leave the industry for a low-paying, entry-level job.

Sonya, a dancer at Rick’s Cabaret, who asked not to be named for privacy reasons, said she started six months ago because she wanted to make money and travel before attending college.

Although she plans to quit in four years, she’s worried she’ll get stuck in the industry.

“I can make double my rent or afford a flight across the country in one night,” she said. “That might be a little difficult for me to leave.”

Typical part-time jobs that college students take — things like bartending, serving and retail — don’t pay as much as dancing and have stricter hours.

And with the demands of student life, stripping’s scheduling flexibility makes it an even more attractive option.

Most adult nightclubs operate with independent contracts, allowing dancers to make their own schedules.

At The Seville, dancers work a minimum of three shifts per week but pick which days they want to work and don’t adhere to a schedule.

Krista said she was shocked when the club’s owner, Dino Perlman, told her when she applied to work there that “school comes first.”

“I can text Dino that I have too much homework or that I need to study for finals, and I’ve never heard a ‘no,’” she said.

Perlman said the majority of The Seville’s entertainers are in school or have a daytime career that utilizes their degree.

“Most of them don’t look at it as a job, but as an opportunity to get them to the next place they’re going in life,” he said.

Brooke, who asked not to be named for privacy reasons, finished school 11 years ago and has been dancing for 10 years, the last nine of which have been at The Seville.

At 36, she has enough money saved to never work again. But she keeps coming back because she enjoys what she does.

“I was there every single day from the minute we opened to the minute we closed,” she said. “Girls will ask me why I don’t have to work anymore. I saved everything.”

Brooke has maintained some of the same regulars from the day she started at The Seville and said they’re the main reason she keeps working.

These days, she said, she rarely takes off her clothes. Instead, she spends most of her time talking to her guests, who treat it like a therapy session.

“They feel like they’re not being judged,” she said. “I’ve heard and seen it all. You’re not going to shock me.”

Despite its attractive points, the job is still physically and mentally challenging.

As a relative newcomer, Sonya said there can be rivalry with some of the veteran dancers, who she said view younger women as a threat to their income.

But no matter how young or experienced, all of the dancers face a tough night now and then.

“Sometimes it’s hard when you’re having a bad night, you’re not making money and no one thinks you’re pretty,” Krista said.

About once every three months, she said, one of the entertainers has a breakdown and leaves work early.

“Your body is your temple, and it’s hard when people judge you on it, because it goes straight to your core,” Krista said.

Sonya said she’s gained confidence from dancing topless in a room that at times has more than 100 onlookers. But a little liquid courage helps her get through most shifts.

“I can do it sober, but it’s easier when I’m drinking,” she said. “They keep a watch on the younger girls most of the time, but when I’m in the private rooms, I drink a little bit.”

It’s essential to have thick skin in an industry that requires employees to bare nearly everything. Gabrysiak and Perlman said they’ve hired many women who seemed confident at first, only to watch them walk out a few days later.

“There’s a reason 99.9 percent of women don’t do this,” Perlman said. “When someone is on the ropes, they don’t last long. This is truly a place where people choose to be.”