Go FIRST to aid in robotics competition held at U

The competition’s goal is to inspire students in science and technology. 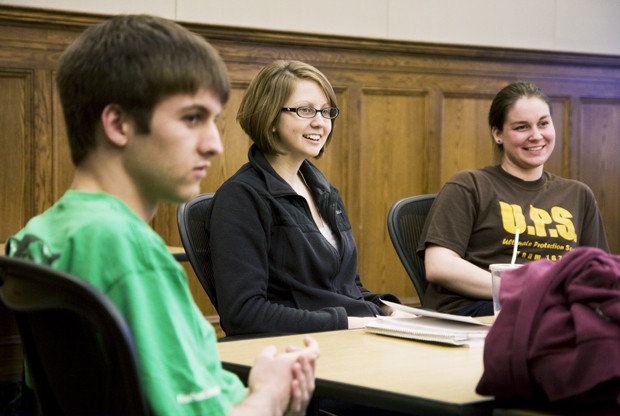 The annual FIRST Robotics Competition will be held on the University of Minnesota campus this weekend, but this year the competition is receiving help from a University student group. Go FIRST is an Institute of Technology group composed of students who participated in the For Inspiration and Recognition of Science and Technology Robotics Competiton in high school. The members are dedicated to both assisting high school students in the competition and furthering the program as college students. FIRST Robotics CompetitionâÄôs goal is to inspire students in science and technology through building robots from scratch. Those robots compete in regional contests where winners advance to a national competition. This weekend, a regional competition will be held at both Mariucci Arena and Williams Arena, events that Go FIRST has been preparing for since they became a student group in August. Scientific and technical communications first-year Renee Becker, who is the president of the group, said one of the goals for the group is to mentor area high schools participating in the program. Astrophysics first-year Beth Burton said the desire to do this came from the impact mentors made on them when they were part of the program. âÄúI feel that my mentors taught me so much,âÄù Burton said. âÄúIt made me want to do that for other kids.âÄù David Cook, mechanical engineering sophomore, said he wanted to make sure high school students get the same experience he did. âÄúI really appreciated the hands-on experience I got from the program,âÄù Cook said. âÄúI wanted to help other people get that same chance.âÄù The desire to give back led to students mentoring kids with the technical, marketing and presentation aspects of FIRST, according to Becker. Burton said there is a lot more to FIRST than the engineering behind building a robot. âÄúThere are a lot of teamwork things that you have to cover,âÄù Burton said. One of the ways the program goes beyond the technical aspects is the chairmanâÄôs report, which is a report the students write detailing what the team has done to promote FIRST in the community. Burton said she mentored Woodbury High School in writing this report. âÄúI gave them tips on things you can say and how to organize it,âÄù Burton said. âÄúWe e-mailed back and forth a lot.âÄù Cook is currently working on training materials for high school students, detailing pneumatics, which is commonly used in the robots to cause mechanical motion with pressurized gas. Becker said other members of the group have mentored the students in the necessary electrical engineering for the robots. Mark Lawrence, planning committee chairman for FIRST in Minnesota, said Go FIRST is vital in bringing the past culture into the program. It is a culture that emphasizes cooperation as much as competition. âÄúAlthough this is a competitive program, everybody shares everything with everyone else,âÄù Lawrence said. âÄúDuring the building period, students will post on the Internet what they are doing with their robot.âÄù Lawrence said that along with mentoring, the program depends on Go FIRST to volunteer at this weekendâÄôs regional. âÄúWith their experience, they can come in without training and be very productive,âÄù Lawrence said. Becker, who will be an assistant volunteer coordinator this weekend, said the group wants to grow larger to have a greater number of experienced volunteers at the regional competition. âÄúWe want to see the group get bigger so we can reach out to more teams in the area and make more of an impact at the Minnesota regional,âÄù Becker said. Contributing to the greater need of volunteers is the rapid growth of FIRST, according to Lawrence, who said the program went from having two teams in the state four years ago to 105 teams attending this yearâÄôs competition. Lawrence said it takes over 250 volunteers to run the competition.