Minnesota was outscored by Wisconsin 13-5 on the night. 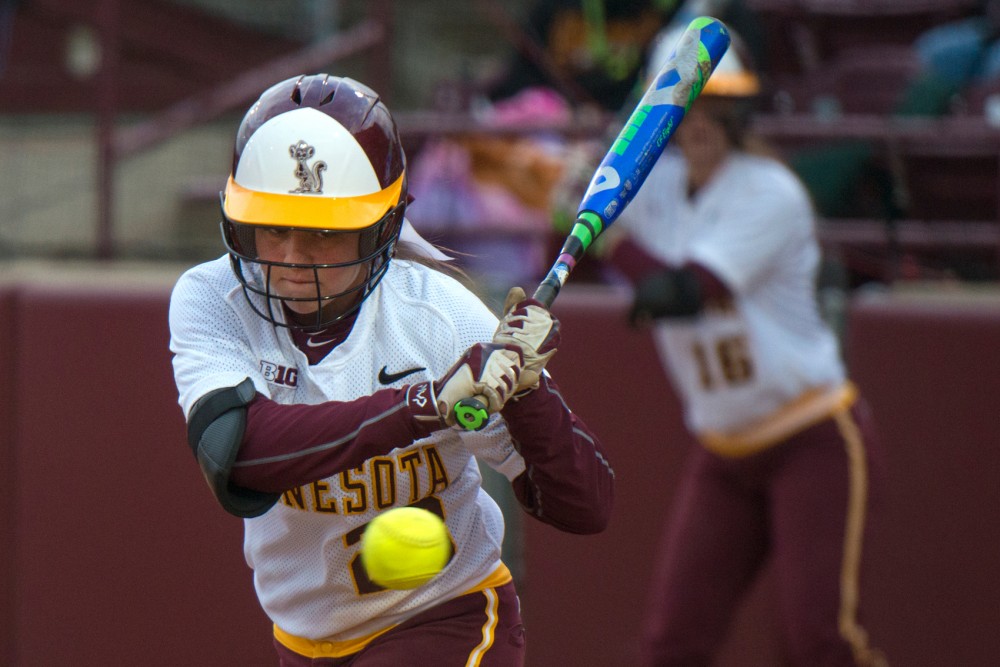 Gophers infielder Danielle Parlich prepares to hit the ball Tuesday during the Border Battle Double-Header at Jane Sage Cowles Stadium. The gophers lost both games to fall 1-7 and 3-6 to Wisconsin.

The Gophers played their first two midweek games of the year and lost both games.

In a doubleheader with Wisconsin on Tuesday, the Badgers took the first game 6-3 and won the nightcap 7-1.

No. 21 Minnesota (27-12, 8-3 Big Ten) got on the board in the bottom of the third inning of the first game when sophomore Danielle Parlich hit an RBI triple and junior Sara Groenewegen added an RBI groundout.

Wisconsin (21-16-1, 6-4-1 Big Ten) quickly answered back and scored five runs in the fourth inning before recording an out. Senior Katie Christner drove in three of the runs with a home run.

The Badgers added another run in the top of the fifth inning to increase their lead to 6-2. The Gophers answered with a run of their own in the fifth but were unable to score again.

Groenewegen pitched a complete game with 11 strikeouts but earned her fifth loss of the season. She allowed nine hits and six runs total, but only one was earned.

The Gophers had two errors in the game, which led to runs for Wisconsin.

“Offensively, we came out swinging. We were really aggressive there,” Parlich said. “But, defensively, we just need to take care of the ball a little more and work on our throws.”

Minnesota scored first again in the second game, with senior Kayla Wenner hitting an RBI double in the fourth inning to put the Gophers up 1-0.

Wisconsin’s offense came alive in the fifth and sixth innings, though, scoring a combined seven runs.

Four of the runs came in the sixth when the Badgers hit an RBI single, triple and two-run home run.

Minnesota was unable to score another run and dropped the second game of the doubleheader.

Senior Nikki Anderson earned the loss, her fourth of the season, after pitching 4 2/3 innings and allowing three runs on four walks and four hits.