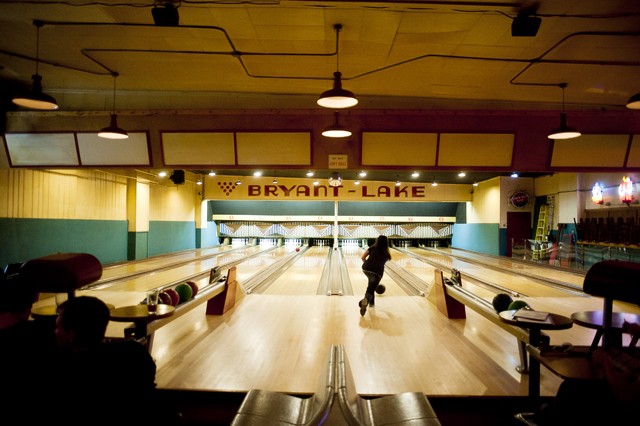 Knocking things over and drinking is fun. Beer pyramids never last for just that reason. While under the influence, being destructive always seems constructive.

Well, what if it actually was? We here at A&E have gone in depth to find the best places to throw heavy balls at deserving pins. Your drunken demolition man deserves an outlet. These bowling alley/bar combos serve that need nicely with cheap beer on tap and plenty of lanes to destroy.

This fine establishment is part theater, part restaurant and part bar/bowling alley. It caters to a more liberal crowd, specializing in local organic foods, beer and wine. They also compost all of their trash. Their eco-conscious attitude and support of local, sustainable foods sets the example that other restaurants should follow.

But what about the beer, you ask? Their heavily stocked bar is the best-equipped bowling alley bar that we at A&E have ever seen.

“We have local micro-breweries on tap,” Alex Jacoby, a worker at Bryant Lake Bowl said. “We have 24 beers on tap and we rotate through almost all of them so that we always have the newest arrivals.”

The bowling itself is a throwback to bygone times.

“We go for the classic bowling alley theme,” Jacoby said. “This has been a bowling alley for over 50 years, everything is all original.”

It’s an interesting throwback, but can also be frustrating as there’s no automated score-keeping system. And let’s face it, addition and drinking don’t pair well.

Live music and theater is also a central aspect to the Bryant Lake Bowl, with a different act almost every night. Live music is prominently featured next to the bowling alley, so you can bust pins and rock simultaneously.

The music is mainly smaller local cover bands that provide a nice ambience. As for theater, it’s quirky acts like, “Dykes Do Drag,” a drag show that all are invited to participate in, or “Books and Bars,” a book club hosted by local comedian Jeff Kamin. The theater seats only 90 people, so acts are necessarily small productions.

It’s a theater, bowling alley and bar. You could base your whole social life here.

If you’re looking for a more technologically modern bowling experience, then Memory Lanes might be the place for you. This 30-lane bowling alley is hip in the right kind of ways with a fully stocked bar and live music three nights a week.

“What sets us apart from other bowling alleys particularly is our live music,” Greg Peterson, a manager at Memory Lanes, said. “We’re the only bowling alley in the state of Minnesota that I know where the stage goes right up to the lanes.”

Monday nights, their most popular, are known as “punk rock bowling,” where Mohawks and splits are a common site. Local punks get a chance to vent some steam while chucking a few balls. Local thrashers like Skoal Kodiak and Gay Witch Abortion have all made memories at this lane.

The bar is pricier and smaller than Bryant Lake Bowl, but still offers up a decent fare to the indulging college student. Start the night off with a $3.50 domestic tap and then move to the ever-so-classy $2 Hamm’s tall boys. Have as many as you want, because the scoring is all automated here.