As the year comes to a close, the School of Music continues its commitment to student engagement with its final concerts of 2017. 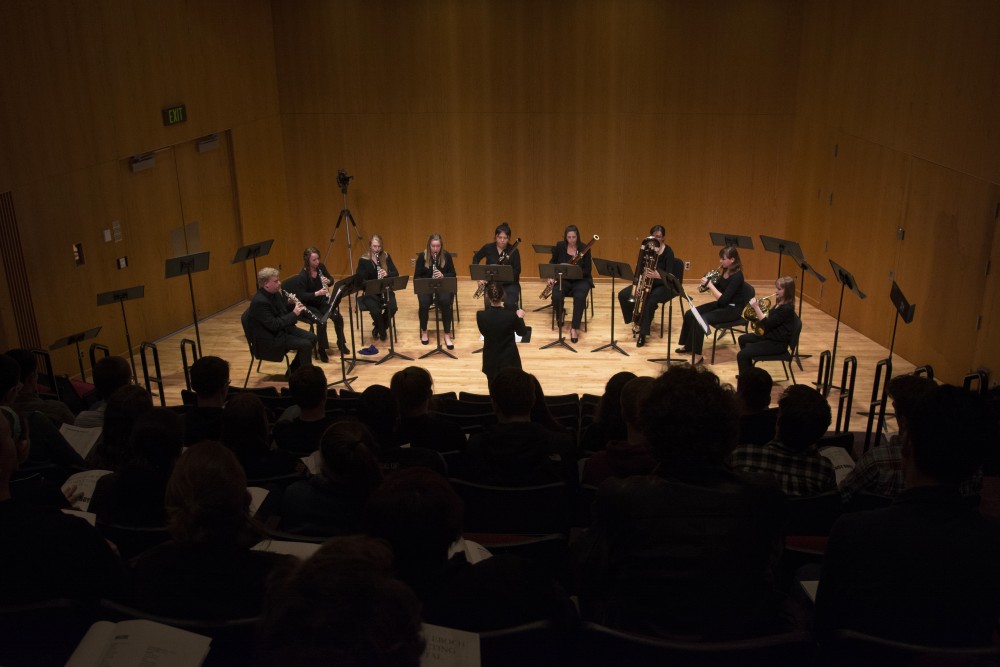 Michelle Eboch gives her Ph.D. recital in conducting in Ferguson Hall on April 7.

When looking for a night of live music, most students head to First Avenue or the Cedar Cultural Center.

However, as 2017 plays its final notes, the University of Minnesota School of Music closes the year with final concerts and holiday cheer. The Campus Orchestra Concert, which showcases the work of non-music major students, will host its final concert on Wednesday at 7:30 p.m.

On Tuesday at 7:30 p.m., the University Wind Ensemble and University Symphony Orchestra Concert will share the talents of top student musicians in one concert. For two ensembles that typically perform separately, the joint concert allows for the groups to showcase the talents that are unique to their disciplines.

“For this concert, I decided to choose one really cool 20th century piece by [Béla Bartók, a Hungarian composer],” said Mark Russell Smith, the conductor of the University’s symphony orchestra and the artistic director of orchestral studies. “It’s just for strings and percussion and keyboard players so there are no wind instruments … It gave us an opportunity to explore this incredibly cool, famous piece that is really difficult and really virtuosic.”

The University’s wind ensemble, whose members might typically perform in the orchestra, will open for the orchestra, allowing the ensemble to develop the themes of the later piece throughout their own repertoire.

These end-of-the-year concerts, however, are celebrations of months of rehearsal and the School of Music’s attempt to further engage students from all disciplines.

“At the School of Music, we are really intentional about scheduling and finding the right times for non-majors … and also having enough different opportunities and classes that they can fit any schedule,” Smith said.

The School of Music also has a continuing commitment to engaging music majors beyond performance, academic studies and private lessons.

This semester, the “Mondays @ Minnesota” series launched, and, on seven Monday nights in the fall semester, the School of Music brought in professional musicians to work directly with students and audiences alike.

“The idea is that students get to be in dialogue with our students, and our students can learn things and learn tips that will actually enhance their career opportunities when they graduate” said Michael Kim, the director of the School of Music.

Some students might be intimidated by or unfamiliar with classical music. The School of Music, however, encourages students of any level of familiarity with the discipline to attend its myriad events. Most concerts are free and hosted in the centrally-located Ted Mann Concert Hall.

Not every event in the School of Music is as traditional as you might think, however. The trombone choir, for example, will host its annual holiday concert and ugly sweater contest on Wednesday at noon, complete with a bedazzled, holiday trombone trophy for the wearer of the ugliest sweater.

“We have a number of arrangements by a very fine Hollywood arranger, some really fun jazz arrangements of holiday standards that are fun … and a wonderful new arrangement of ‘The Grinch,’” said Thomas Ashworth, the director of the trombone choir. “After we do three jazz pieces and ‘The Grinch,’ … then we play four of our traditional carols with a sing-along.”

The annual tradition is a way of ringing in the holiday season, connecting with friends and colleagues and singing out stress just before finals week.

“I like just having everybody together and enjoying everybody’s company,” Ashworth said. “In the School of Music, we don’t really have a communal place where people can get together, like a coffee shop … so this is kind of a unique opportunity to see everyone.”

The School of Music will continue to celebrate the power of music in all its forms, whether it’s a Christmas carol or a sweeping orchestral arrangement.

“Any kind of music… came from a human invention, human passion and human ideas,” Therinen said. “Even though a piece of music was written by someone 300 years ago… doesn’t mean that it’s any less relevant. That’s someone expressing their ideas through a nonverbal art form… I think if we remember that, then it might change the disillusion we have about what it means to be a classical composer.”

What: Annual U of M Trombone Choir Holiday Concert and Ugly Sweater Contest

What: U of M Campus Orchestra Concert