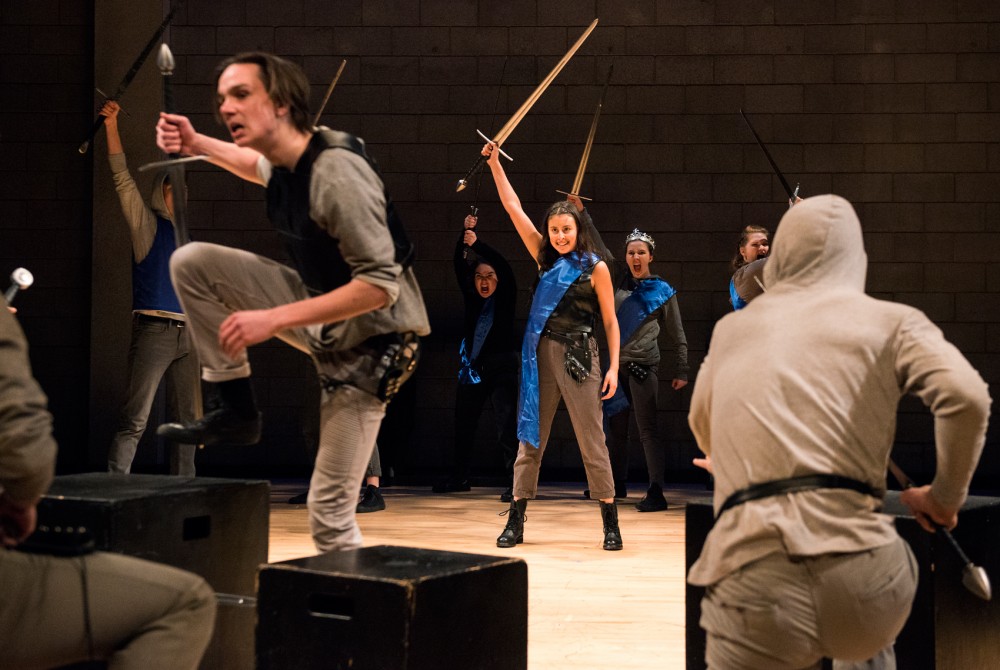 The cast of Shakespeare's King Henry VI run through a dress rehearsal at the Rarig Center on Monday night. The play opens March 30 and runs through April 4.

Austen Macalus
Bickering factions, swaying loyalties, backstabbing betrayals and a whole lot of political ambition — “Henry VI” is the perfect play for this election season.
Although today’s politicians do not battle things out using broadswords, the play’s compelling historical narrative speaks to a universal human experience.
“These are all things that are timeless, that we are still dealing with today,” said co-director Steve Cardamone.  “[Shakespeare] knew what it was like to be innately human — with all of our strengths and all of our weaknesses.”
Shakespeare’s enduring legacy will be on full display this week at the Rarig Center.
Celebrating the 400th anniversary of the playwright’s work, the University’s theater program will perform “Henry VI,” featuring all 20 sophomore BFA students.
Following the demise of King Henry VI, the horrific Wars of the Roses and the convoluted politics of 15th century England, the play was originally written as a trilogy.
However, Cardamone and co-director Doug Scholz-Carlson restructured “Henry VI” into a two-part performance, with “Part One: Contention” and “Part Two: Ascension.”
The directors worked with student actors to narrow the scope of the story while maintaining the narrative’s clarity.
“It’s a historical play — a specific moment in time. You need to honor that,” Cardamone said.
For many of the performers, unpackaging the historical context provided helpful background to the acting process.
With every student performing multiple parts in the play, many performers could distinguish characters by portraying them as actual historical people, actor Joseph Bricker said.
“We had to bring history to the story and to the text,” Bricker said. “I tried to take what I could from the history to inform the characters.”
Particularly, Bricker relied on historical accounts of Duke of Suffolk’s physical description for his depiction of the royal with large stature and confidence.
“I found silhouettes with each of my characters — that’s what I started with,” Bricker said. “That helped inform some of the dialogue. Working with the text, it became a relationship between the two.”
Bricker and other performers worked with fellow cast member Jennifer Klink, who served as the play’s dramaturge, to research character’s backgrounds.
“One of the main things I looked into was Shakespeare’s source material,” Klink said.
Shakespeare created the play by dramatizing historical anthologies, providing room for dramatic interpretation of characters in the play’s text, Klink said.
According to Cardamone, Shakespeare’s plays usually contain less subtext than contemporary works, so the text is essential to the performance.
“Anything in the text about relationship — between a father and a son or between two enemies — you have to honor that,” Cardamone said. “You get this really great blueprint in the play, and you just follow it and stay true to the given circumstances.”
Cast members and directors alike highlighted numerous bloody battle scenes and intimate one-on-one duels as some of the most exciting parts of “Henry VI.”
Working with Scholz-Carlson and Annie Enneking — both certified fight coordinators — the cast worked to develop the fight scenes, often by rehearsing in slow motion.
“With 16-20 bodies on stage with broadswords in a small space, obviously there is a lot of rehearsal time to make sure it looks fantastic and ferocious, but they also have to be really safe,” Cardamone said. “You have to go really slow, and sometimes it is a tedious process.”
According to Bricker, action scenes helped facilitate collaboration between cast members.
“You really need the other person — you have to be on the same page the entire time; otherwise someone may get hurt,” Bricker said.
For the student performers, the seven-week rehearsal process of “Henry VI” has become a vital part of their education.
“It has taught all of us to be better ensemble members and how to really support each other,” Klink said. “It really has taught us how vital those minor roles are.”
The learning process for Bricker came down to interpretation of the text.
“The playwright gave you these words for a reason; you can use those to communicate a story,” Bricker said. “Learning how to use language and make characters’ argument using the text … has been a huge pillar in my acting training.”
Delete Image
Align Left
Align Center
Align Right
Align Left
Align Center
Delete Heading