Protesters gathered in downtown Minneapolis following the release of body camera footage in the fatal shooting of Thurman Blevins by Minneapolis police. 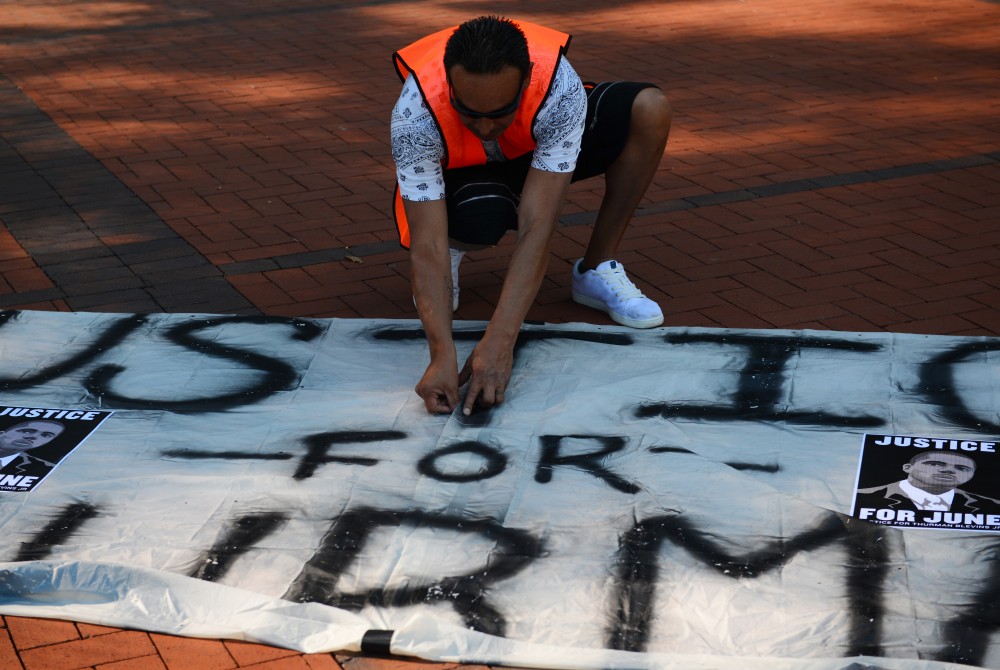 A protest occurred in downtown Minneapolis on Tuesday, July 31, 2018 after the announcement to not charge the two police officers involved in the death of Thurman Blevins.

Hundreds took to the streets in downtown Minneapolis Tuesday afternoon to protest the fatal shooting of Thurman Blevins.

Around 200 people gathered to protest the death of 31-year-old Blevins, who was fatally shot by police in an alley in North Minneapolis, as well as to call for the arrests of the two officers involved. The protests come one day after Hennepin County Attorney Mike Freeman’s announcement to not press charges against two police officers who shot Blevins following a foot chase on June 23.

“We’re here to demand that police officer be fired [and] that there should be a federal investigation opened. And we are working on that as a family,” Brown said.

On Monday, Freeman announced in a press conference that he would not charge MPD Officers Justin Schmidt and Ryan Kelly for the fatal shooting of Blevins. During his announcement, protesters, including family and friends of Blevins, interrupted his statement.

Bob Kroll, president of the Police Officers Federation of Minneapolis, has defended the officers’ actions, calling them “heroic” and said they only fired at Blevins after he shot at the officers himself.

“Police officers never want to be forced to fire their weapons. Sadly, Mr. Blevins gave them no other option,” Kroll said in a statement.

Minneapolis Ward 5 City Council member Jeremiah Ellison, who represents part of North Minneapolis, said he attended the protest to hear from community members and those affected.

“I have come to recognize a lot of the Blevins’ family, and when I see protests where they are present at the microphone I especially want to make sure I am there to hear what they have to say,” he said.

After several community leaders and members, including Blevins’ family members, spoke to the crowd at plaza outside the Hennepin County Government Center, protesters began marching through downtown Minneapolis.

Around 6 p.m., several people and cars blocked the light rail tracks, delaying service to the Nicollet Mall stop. A few protesters blocked the tracks with a large sign that read, “Please don’t shoot me,” referring to a phrase that Blevins said while being chased in the body-camera footage.

The protesters marched to the Target Center and chanted at the crowd of Twins’ fans outside of the stadium. They then headed to Nicollet Mall, where numbers dwindled to approximately 50 people and ended around 8 p.m.

On Sunday night, Minneapolis Mayor Jacob Frey directed the release of police body-camera footage of the shooting to the public. He announced plans to do so earlier this summer.

The Blevins shooting is the latest police shooting in the Twin Cities that has resulted in protest in recent years. In 2017, after a jury found the police officer that shot Philando Castile not guilty, thousands took to the streets of Minneapolis to protest the verdict.