Living up to their name, the West Coast skater punks shredded the shoes off punkers and hipsters alike Friday night — literally! 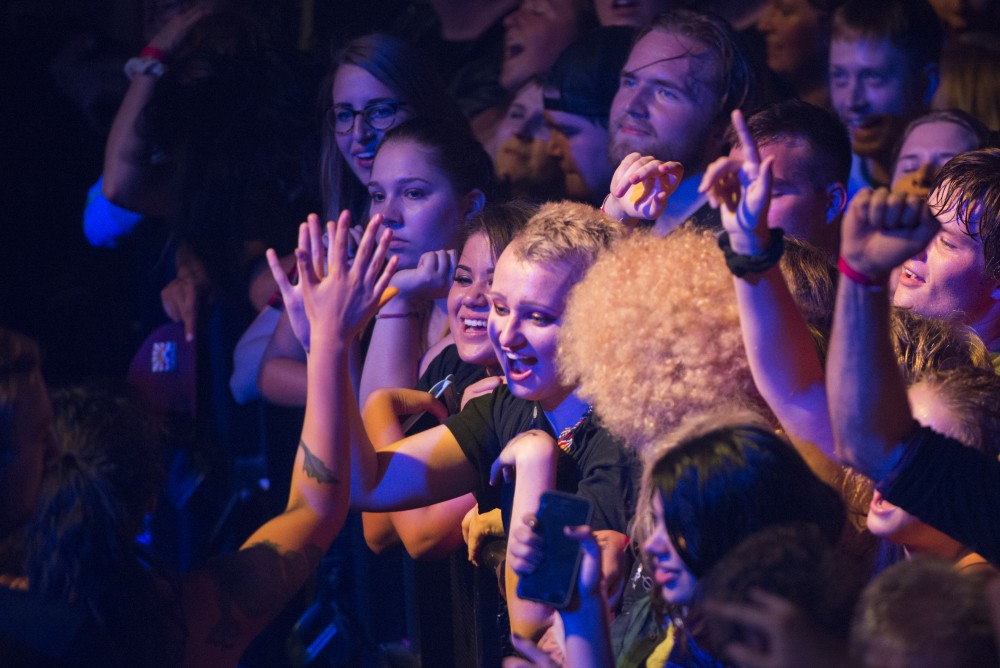 A member of the crowd high-fives a person who was escorted out of the photo pit for crowd surfing on Friday, Sept. 7 at the First Avenue Mainroom.

After asking the crowd, “Do you want to get some alcohol?” on Friday night, FIDLAR got a response charged with mosh pits and crowd surfers.

Ringing in the first stop on the band’s “A North American Tour in 2018” at First Avenue with warm-up acts NOBRO and Dilly Dally, FIDLAR gave the hyped-on-anticipation crowd the energy they so badly needed.

While NOBRO came out strong, performing their newest project, “STOKE LEVEL: HIGH!,” Dilly Dally put the crowd into a screamo-esque trance. Apart from the few long-haired lone rangers brewing up a five-person mosh, the crowd was turned off.

Luckily, after shouts of “FIDLAR” and a couple “fuck it dogs,” the main event began. The boys from Los Angeles shattered the sluggish air with one rift.

Opening with their new single, “Alcohol,” there was no turning back. The floor instantly split in two, with a mosh pit on one side and head-bangers on the other — a divide surveyed by a wide-eyed First Avenue staff member armed with earplugs.

As lead vocalist Zac Carper melodically screamed his way into the next tune, crowd-members had seconds to catch their breath. Someone dropped their phone while another two audience members frantically pushed their way out of the mosh pit toward fresh, non-sweat-filled air.

Then, it was every attendee for themselves once again as the first lines of “West Coast” blared through the ever-powerful First Avenue speakers.

In true FIDLAR fashion, the only stage props were four televisions looking straight out of 1980 that played a loop of psychedelic, static-infused graphics of the band’s logo. A gargantuan bedsheet with the same logo hand-painted in blood-red towered as the backdrop.

No one was there for theatrics.

“We just finished some music, as some of you know,” Carper said. “When it’s coming out, who knows. But hey, it’s gotta count for something.”

The set-list featured about 75 percent classics and 25 percent new material. Slapping drum rhythms and guitar-heavy interludes are standard for the new stuff, but one song in particular caught the audience’s ears. Starting with a bass line sounding more like something off a Biggie record than anything punk, the crowd waited for the guitar and vocal drop. It came, with a wave of wailing bodies and elbow shields.

As per usual, FIDLAR stayed true to their name. The crowd was ballistic, the music ripped and the dudes on stage made sure everyone had a good time. The venue? Not so much.

Everything felt a bit too perfect and in sync. The absent appeals of general admission punk shows are the times you get knocked on the floor or thrown into a mosh pit against your will and have to fend for yourself.

This time, crowdsurfing got you a one-way pass into security’s arms and a walk of shame through the photo pit. While it makes sense for safety reasons, this seemed a bit over the top. FIDLAR was the first to say so, too.

Building the ever classic “wall of death” to their classic song “Wake Bake Skate,” First Avenue schismed down the center and then cosmically smashed together with one giant beat drop. Looking like something out of a scene from the “Game of Thrones” episode, “Battle of the Bastards,” with purple strobe lights instead of mud, grown men and women reached for salvation as punk-induced war raged above.

But every time someone fell, 10 hands reached down to help. Safe, empty pockets formed, and the fallen were back up to continue raging.

The boys on stage continued to radiate good vibes, calling for a “ladies only” mosh pit for their song “5 to 9.” If someone was getting handsy, they said, anyone had the absolute right to pop them a few times in the face.

As the lights came on to illuminate the Grain Belt-covered floor, attendees sleuthed around, helping each other find kicks previously worn by those now sporting only socks — an aftereffect of punk-show mosh pits.

That’s what makes FIDLAR and its fans stellar. They may be awkward and they may have their 40 oz. on repeat, but those hooligans with their jean jackets, chokers and dyed hair were there to let out their energy in ways only waves of skater rock can whip up.

“The crowd in Minneapolis is better than those Chicago fools,” Carper said.

Hey, that has to count for something.