On Saturday, demonstrators marched to the North Loop, calling for charges against the officers involved in the Clark shooting. 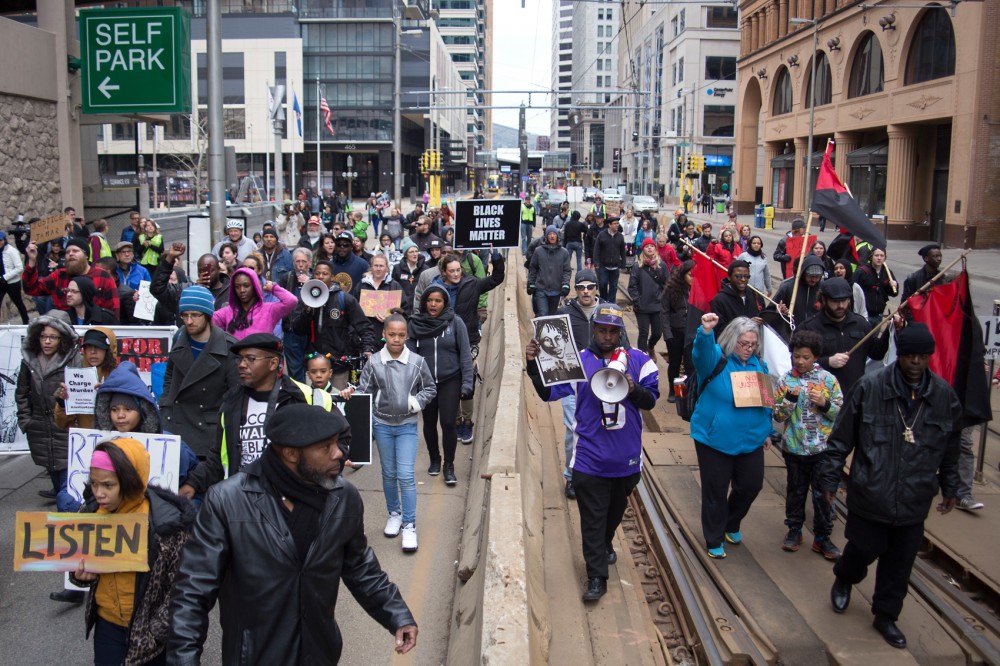 Demonstrators march on the tracks of the light rail through downtown Minneapolis on Saturday following a rally outside of the Hennepin Country Government Center. The march's route began at the Government Plaza and ended in the North Loop of Minneapolis, causing both car and light rail traffic in the process.

Annalise Gall
Hundreds of protesters rallied in downtown Minneapolis Saturday, demanding the prosecution of the two officers involved in November’s fatal shooting of Jamar Clark.
Earlier this month, Hennepin County Attorney Mike Freeman said he won’t use a grand jury to help decide the case, breaking a 40-year precedent. Freeman said in a statement that by not using a grand jury the case decision would have more transparency and accountability.
In the statement Freeman also said grand juries shouldn’t be used in police shooting cases.
“At least he recognizes that grand juries are not a fair way,” Minneapolis resident Jessica Donahue said at the protest.
Still, some protesters said the current system of police prosecution isn’t working.
“If there was a mechanism to prosecute and charge these cops, we wouldn’t have to be out here,” Justice 4 Jamar Clark organizer Mel Reeves said.
Protesters gathered at noon outside the Hennepin County Government Center, where demonstrators gave speeches, performed spoken-word pieces and led cheers and songs. Afterwards, protestors marched to the North Loop, ending the rally at about 3 p.m.
Twin Cities Coalition 4 Justice 4 Jamar Clark and Black Lives Matter were among activist groups in attendance.
Minneapolis resident Joanne Hager, who attended the protest, said if the officers are found to be guilty, they should be prosecuted.
“A badge should not protect that,” she said.
Police Chief Janee Harteau said in a video statement Thursday that the Minneapolis Police Department will not tolerate violence in the wake of Freeman’s verdict. Many protesters said the statement sounded like a provocation.
“It reminds me of ‘1984’ — using big brother tactics to warn people that is actually meant to incite violence,” Black Lives Matter team leader Kandace Montgomery said.
Protesters said the verdict is unpredictable based on the way the case has been handled thus far. Many said the decision has taken too long.
“We are tired — not only the black people but the white people. We are all tired,” said Jamar’s father James Clark.
Protesters said they chose to march to Second Avenue North and First Street North in the North Loop because the corner is “the heart of capitalism in the city.”
Protesters stopped in front of the Bachelor Farmer, a restaurant co-owned by Eric and Andrew Dayton, Gov. Mark Dayton’s sons. Some said that the buildings on that block are the result of an oppressive economic system.
“The fight for economic justice and racial justice go hand in hand,” protester Eva Metz said.
Delete Image
Align Left
Align Center
Align Right
Align Left
Align Center
Delete Heading