So far, shootout has been kind to Minnesota 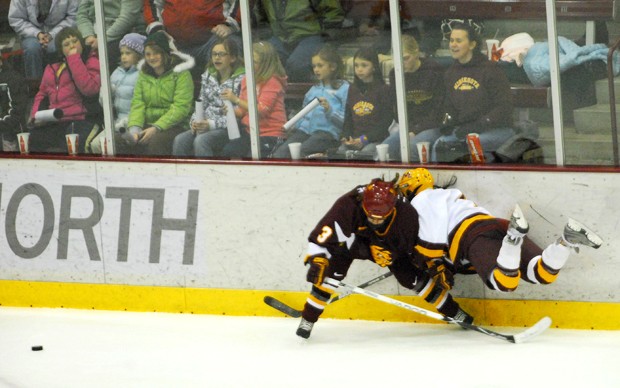 Even though a shootout win is worth one point, that point is an important one for the Minnesota womenâÄôs hockey team. That point is also what kept Minnesota (21-3-2 overall, 16-2-2-2 Western Collegiate Hockey Association) tied for first in the WCHA with Wisconsin this weekend. Minnesota beat Duluth in a shootout on Saturday after losing 4-2 on Friday night . Minnesota has participated in two shootouts this season, winning both of them; Ohio State and St. Cloud have also gone undefeated in shootouts this season. Coach Brad Frost said so far he likes the shootout rule because his team has had success in them. One critical part of a shootout for a team is the goalie defending their net. Both first year Alyssa Grogan and sophomore Jenny Lura have sat between the pipes during a shootout. Grogan faced Wisconsin on Oct. 24 and Lura was in net on Saturday. Neither let in a shootout goal, an aspect Frost said he is happy with. Lura faced 19 shots in 65 minutes of action Saturday, but the two shots taken by Duluth skaters in the shootout were the most important. She said the shootout was nerve-wrecking but more exciting because it was her first shootout of the year. âÄúBeing that it was against Duluth, I was even more excited because of our rivalry,âÄù Lura said. Her nerves were in check thanks in large part to the GophersâÄô shootout to end each Thursday practice before a series. The winner is rewarded with the honor of wearing a Steve Yzerman Red Wing jersey brought by assistant coach Jamie Wood . Recent winners have been first-years Nikki Ludwigson and Monique Lamoureux. Lura said she doesnâÄôt really have a strategy while in a shootout, but just watches the puck and the shooterâÄôs hands to see what they are doing. The other determining factor for a team to win the shootout is the skaters chosen to shoot. Frost said he chooses shooters that have success in their Thursday shootout. First-year Sarah Erickson is 2-for-2 in shootouts this year while senior captain Gigi Marvin is 1-for-2 and Monique Lamoureux is 0-for-1. EricksonâÄôs strategy is spontaneous and not planned and goes into the shootout not thinking about one move or another, but looks for what the goalie will give her. âÄúI donâÄôt pre-think them,âÄù she said. âÄúIâÄôll look for whatever is open at that point. Usually, goalies have tendencies in games but they can also be very different in shootouts.âÄù She learns from watching different hockey playersâÄô videos every day before a game, something that she sometimes takes a little heat for. âÄúI get a lot of trash talk for it, but sometimes it pays off,âÄù she said. Erickson hasnâÄôt been in a shootout before this season, as far as she can remember, but shootouts are a favorite of hers. She said she is on the ice before and after practice working on shootout moves and the celebrations. The best part about scoring for Erickson is the celebration that follows. âÄúI always like [Washington CapitalâÄôs Alexander] OvechkinâÄôs celebrations,âÄù she said. âÄúTheyâÄôre pretty outrageous. A good [celebration] is what makes it the best.âÄù