Dan Rodriguez to play at Rock the Cause

The local folk artist released his album “Come on Home” in June and tours this fall. 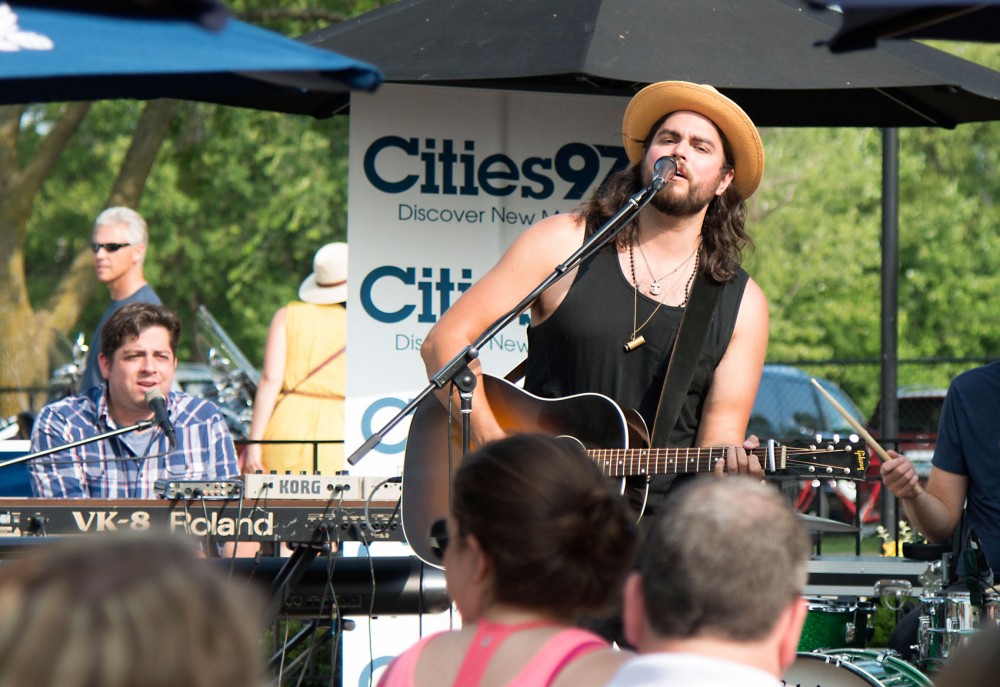 Dan Rodriguez performs at Cities97 Oake on the Water at Maynards on Thursday, July 9. Oake on the Water, a summer concert series, takes place at various lakeside restaurants from May through August.

Several years ago, Dan Rodriguez played at the end of checkout aisles for a small grocery storeâÄôs anniversary celebration. âÄúPeople were bagging their groceries and checking out, and there I am with a guitar, just singing,âÄù he said of his grocery store gig. âÄúIâÄôm so glad I had that moment because I went from being able to say, âÄòThe people that heard me today were bagging their groceries,âÄô to being able to say that people that heard me today were bagging their groceries, but heard me on the intercom on 96.3.âÄù This month, Rodriguez returned from playing two weeks at Summerfest in Milwaukee and played Cities 97âÄôs âÄúOake on the Water.âÄù He released his third full-length album, âÄúCome on Home,âÄù at the end of June, and this weekend, Rodriguez will play at Rock the Cause outside Acadia alongside bands including Communist Daughter and Farewell Milwaukee. Rodriguez has been playing music since he was about 10 years old. He said he first pursued the guitar in an attempt to follow his brotherâÄôs footsteps. âÄúIâÄôd secretly steal his guitar when he wasnâÄôt using it,âÄù Rodriguez said. âÄúI picked guitar because you donâÄôt need anybody else. âÄ¦ I was the middle child, so I kind of had the âÄòmove out of the way, IâÄôve got thisâÄô mentality.âÄù Rodriguez stuck with the guitar and moved to Minneapolis in 2004 to pursue music. He briefly played in a duo band with his brother called the Auburns but switched his focus to a solo career in 2008. After recently returning from a one-month tour of the Midwest, Rodriguez will tour the West and East coasts in the fall to support his latest album. He said he plans to tour in other regions, such as the Southwest. âÄúIâÄôve never been to the Northwest, so IâÄôm very excited to see Washington and Oregon and California. IâÄôm taking a little bit of extra time to make sure I can see some things,âÄù Rodriguez said. Though Rodriguez often performs solo, he has a semi-regular band lineup of Rob Morgan of Owl City on bass, drummer Aaron Johnson and his brother AndrÃ© Rodriguez. HeâÄôll play with his band at Rock the Cause. The acoustic folk artist named John Mayer and Death Cab for Cutie as lyrical and musical influences. He said he usually writes the melody of the song first and then focuses on lyrics. Two of the tracks on the latest album, âÄúCaliforniaâÄù and âÄúMilk & Honey,âÄù originated from a trip to California, where Rodriguez had a fruitless audition for âÄúThe Voice.âÄù âÄúI learned a few things. One, I donâÄôt want to do reality television again. Two, you can make friends in the most unique of places. And the third thing I learned is when you feel like youâÄôve failed and you watch something youâÄôve put your hopes on crumble in front of you, itâÄôs going to do one of two things: ItâÄôs going to break you or itâÄôs going to light a fire under your butt,âÄù Rodriguez said. Shortly after his trip to California for âÄúThe Voice,âÄù he wrote a song for a Budweiser commercial that aired nationally. Rodriguez said the commercial helped open new doors for him, and heâÄôs looking to do bigger things in the next year. His albumâÄôs title track, âÄúCome on Home,âÄù originated as a message to a friend. âÄúI didnâÄôt expect to record it or anything like that, but I did. And I loved it so much that it became the title track of the album,âÄù Rodriguez said. âÄúThat one is more connected to me as an individual, to my heart, so that easily became the most powerful song on the record.âÄù At the same time, Rodriguez said the songâÄôs theme of sticking with oneâÄôs roots speaks for the album and his simplistic musical style. âÄúI wanted to have a more purist approach towards the album,âÄù Rodriguez said. âÄúI feel like a lot of folks are starting to move forwards with electronics stuff, and it sounds awesome, but itâÄôs just not my thing. âÄ¦ I wanted to do something that felt really grounded.âÄù Rock the Cause Where: Acadia Cafe, 329 Cedar Ave., Minneapolis When: 12 p.m. Saturday Cost: $9.63