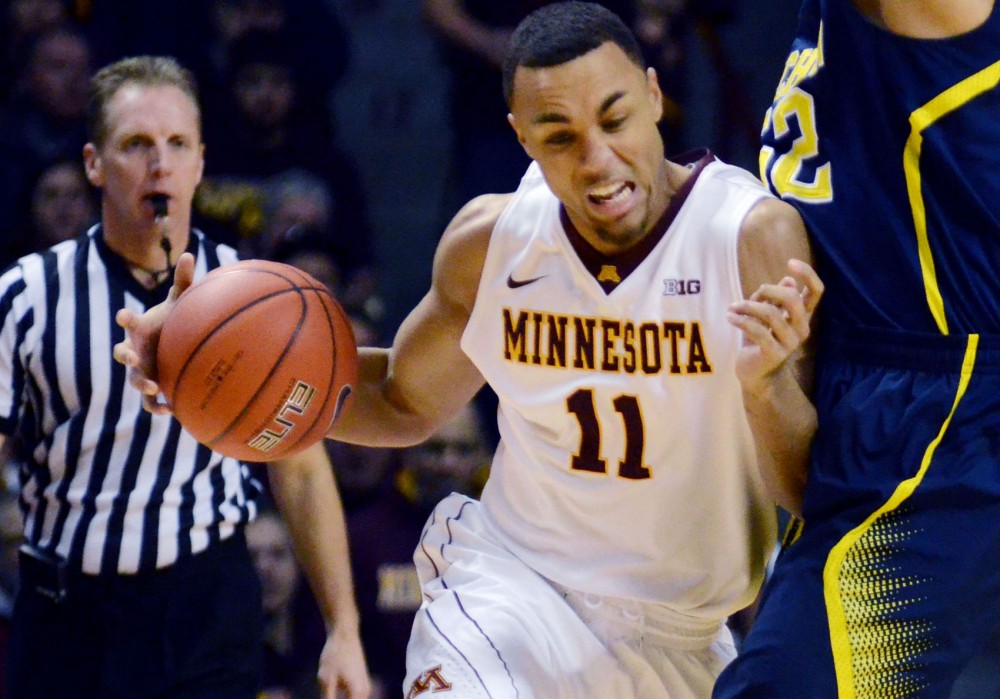 Rodney Williams and Joe Coleman both played through injuries in the Gophers’ loss to then-No. 5 Michigan on Thursday, coach Tubby Smith said Monday during his Big Ten conference call.

Smith said Williams also “tweaked” his knee against Michigan. He said Coleman had already missed a couple of practices before the Michigan game due to an ankle sprain he suffered against Indiana on Jan. 12.

Coleman said after Tuesday’s practice that he reinjured his ankle against Michigan, and it “started to bother” him in the second half.

“We had an MRI on [Coleman’s ankle], but it looks like it’s nothing serious,” Smith said.

Coleman and Williams combined to score 16 points on 5-for-16 shooting Thursday. They also combined to commit six turnovers.

Coleman, who is averaging more turnovers than assists this year, also had a career-high six assists against the Wolverines.

Smith said Williams wasn’t “his mobile self” against Michigan, as the senior co-captain struggled from the field and had a Big Ten season-low four rebounds.

Minnesota is 1-1 on the road in the conference entering Wednesday’s game at Northwestern. The Gophers beat the Wildcats 69-51 at Williams Arena on Jan. 6.

But Minnesota has lost its last four trips to Evanston, Ill.

The Gophers have not won at Northwestern since 2007-08, Smith’s first year as Minnesota’s coach.

“That 1-3-1 defense is kind of different when they’re at home,” Williams said Tuesday. “To me it’s a different feel. … They just play pretty well at home.”

But across the Big Ten, home-court advantage has had less of an effect.

In the past week, road teams have won seven of nine Big Ten games.

“It just seems there isn’t a big gap … talent-wise [in the Big Ten],” Northwestern coach Bill Carmody said in his Big Ten conference call. “If there is a gap, it’s not so great that you can’t overcome it every night.”

Smith said after the Michigan loss that he was disappointed in his team’s effort in practice the day before — one Coleman missed because of his injury.

The sixth-year Gophers coach revealed Tuesday that his strategy for that practice was to “be less intense” in order to help his players recover from fatigue and injury.

“Problems of poor coaching on my part to do it that way,” he said.

Smith said he had the Gophers practicing twice a day before the University of Minnesota’s spring classes began Tuesday.

“[They were] lifting and shooting in the morning and coming back in the afternoon,” Smith said. “We’ve changed that.”