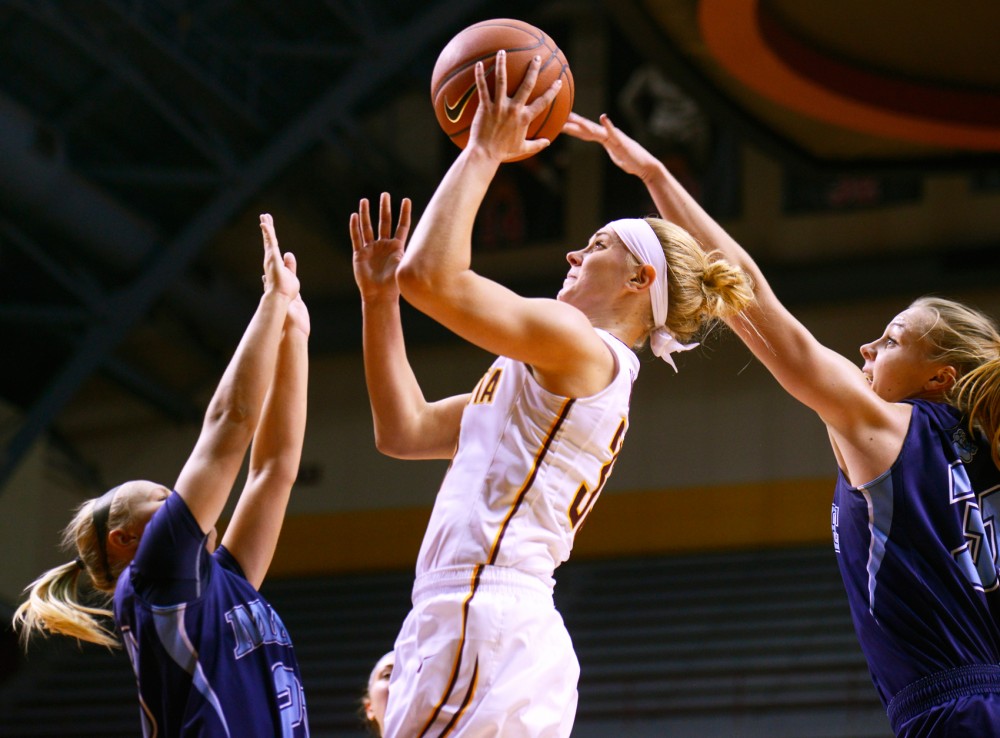 Carlie Wagner manages to shoot in between two Maine defenders at Williams Arena on Nov. 20, 2015.

In a shootout between Minnesota’s Carlie Wagner and Penn State’s
Teniya Page, it was Wagner who pushed Minnesota to a 70-64 win and onto the
next round of the Big Ten Women’s Basketball Tournament.

Wagner scored 26 points and brought in 10 rebounds. Recent
struggles shooting the ball didn’t stop her from producing when the Gophers
needed her to.

“I knew it was coming because I knew eventually my shot would
come back,” Wagner said. “I knew that I couldn’t just stop shooting.”

Their leading scorer’s performance led the charge, but it was a team
effort.

“It’s amazing cause it was a tight game, and coach always says be
ready when your number is called,” Wagner said. “We got quality minutes from
our bench tonight. I thought they were a huge part of this win.”

The junior center felt like she had an advantage over the
opposing centers.

“That was kind of our thing going into the game was going to the
five man a lot,” Fernstrom said. “I just wanted to be an offensive threat
tonight. The blocks just kind of happened.”

Page erupted for 35 points shooting 50 percent from the field. She
consistently broke down Minnesota’s defense to get to the basket.

Penn State’s guard often had to shoot over two Minnesota
defenders, but that didn’t derail her from getting her team points.

“She’s a special player, and she hit some tough shots,” Minnesota
head coach Marlene Stollings said. “It’s hard to get beat by one player, and I
thought we did a great job containing the rest of their team.”

With a strong start to the game, the Gophers looked like they
were never losing the lead.

Multiple defensive stops early set the tone for Minnesota. Wagner
said the message preparing for the tournament was to play at full intensity
from the start.

“We had to come out flying at em and ready to go from the tip,”
Wagner said.

Easy chances at the basket helped the Gophers build a solid lead.

Minnesota never trailed until there was about three and a half
minutes left in the third.

The Nittany Lions brought themselves back putting pressure on the
Gophers. It was a one-point game in the Gophers favor heading into the final
quarter.

Fernstrom said Minnesota didn’t have the best mindset after
losing big leads in previous games this season, but this time it was different.

“This game we knew we couldn’t do that because there is no next
game if we do that,” Fernstrom said. “Coach was telling us to raise our
intensity . . . having more intensity, more heart, and more passion than them,
and I think that was the most important thing.”

The Gophers will play Maryland in the next round of the
tournament at 5:30 p.m. Saturday.